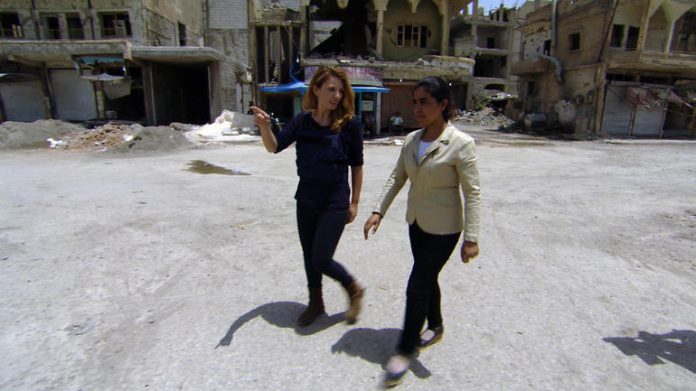 A year after ISIS lost their stronghold in Raqqa, their headquarters for three years, 60 Minutes reports on the Syrian forces who helped drive the extremists out. And the rebuilding process that's just beginning

It's been four years since the United States launched a bombing campaign against ISIS in Syria. Today, tens of thousands of the extremists are dead, captured, in hiding or on the run, and the battle is entering its final phase. Americans know about the barbarity of ISIS but what's less understood is how the U.S. went about destroying ISIS as a military force, who has been fighting alongside American troops, and what remains to be done. Tonight we'll take you inside America's war against ISIS in Syria.

Last October, ISIS lost control of the city of Raqqa, its headquarters for more than three years. We were there as the city shuddered, pummeled by more than four thousand U.S. coalition airstrikes. Those civilians who could, fled to safety, while ISIS snipers and suicide bombers lurked inside the splintered buildings of a ghost town, covered in the stench of death.

When we returned this past June, there were signs of life. Families coming home, taxis running in the streets, and residents rebuilding as best they could. It was there we met Laila Mustafa, a 30-year-old woman, in charge of resurrecting this skeleton of a city.

Holly Williams: Is this what victory over ISIS looks like?

Born and raised here, Mustafa trained as a civil engineer. She was chosen by a group of community leaders to run the new civilian council and is the closest thing Raqqa has to a mayor.

Holly Williams: So, this is Al Naim, this is where ISIS used to execute people?

Laila Mustafa (Translation): They used to kill innocent civilians in Raqqa, put their– heads on spikes for days. They wanted to show brutality in order to make people obey them.

ISIS justified its brutality as the only correct interpretation of Islamic Law, the same reason the extremists insisted that women cover nearly every inch of their bodies in public.

Holly Williams: So last year when ISIS was still in charge of Raqqa, women couldn't show their faces in this city. And now you, a woman, you're in charge of the city.

Laila Mustafa (Translation): It's a challenge. A challenge to the mentality of ISIS. And a challenge for women to emerge from the struggles of injustice, violence, and exploitation.

Laila Mustafa told us that many of the Syrian fighters who helped defeat ISIS in Raqqa were women, members of a militia group known as the Syrian Democratic Forces, or SDF.

When America was searching for allies on the ground, the SDF stepped forward to fight and die. Block by block, house by house, they became the foot soldiers who took "the state" out of the Islamic State. Since its peak in 2014, when ISIS brought their reign of terror to a swath of land in Syria and Iraq roughly the size of Indiana, their self-proclaimed caliphate has shrunk to a few pockets in the desert.

A senior U.S. military officer told us much of the credit belongs to this man: SDF leader General Mazlum Kobane. He's reclusive, and doesn't give many interviews, in part, because he's worried he'll be assassinated.

Holly Williams: How many soldiers do you have under your command?

Holly Williams: How big was your militia when you first started out?

General Kobane (Translation): When I started out with my comrades, there were 30 of us.

General Kobane built his army in Syria with farmers, factory workers and students. Members of an ethnic minority known as the Kurds dominate the militia. For decades in Syria the Kurds were treated as second-class citizens, but they've transformed themselves into a disciplined and tenacious fighting force.

Holly Williams: How many ISIS fighters have you and your Americans partners killed, roughly?

General Kobane (Translation): It's really difficult to give you an accurate number. But I would imagine the rough number would be around 20,000.

Holly Williams: You know, General, you come across as– as quiet and– and mild-mannered and even a bit shy. And I have to tell you, it's not what I expected of a feared militia leader.

Holly Williams: How long do you think it's going to take you to claw back the last remaining pockets of ISIS territory here in Syria?

General Kobane (Translation): We believe toward the end of this year.

Sources in the U.S. military concur. Just outside the town of Al-Shaddadah we saw American special operations forces working with the SDF to close in on one of the last remaining ISIS safe havens. Around 2,000 U.S. troops are serving in SDF-controlled territory. The desert is dotted with American bases.

We wanted to talk to someone in charge at the Pentagon or the State Department, but they both declined our requests. Instead, we spoke to two U.S. senators who both sit on the Armed Services Committee and recently visited Syria: South Carolina Republican Lindsey Graham, and Democrat Jeanne Shaheen from New Hampshire.

Sen. Jeanne Shaheen: The strategy has been let's defeat ISIS. And we're well on our way there. And this really has happened against very long odds with very few Americans with very little money.

Sen. Lindsey Graham: The Kurds have come forward when nobody else would to help us destroy ISIS, which is a threat to you, me, her, and everybody else.

Holly Williams: What do you wanna tell the American people about America's partners in Syria?

The SDF has lost 12,000 fighters, according to General Kobane. Sons and daughters sacrificed in the fight against ISIS. But they've also gained the protection of the world's most powerful military. And with American weapons and training have taken control of about a third of Syria.

From the Tigris River in the east to the Euphrates in the West, the rest of the country, after seven years of chaos and civil war is mostly back in the hands of the Syrian Regime.

Holly Williams: Five years ago, in your wildest dreams, did you think that one day you'd be partnered with the U.S. military?

General Kobane (Translation): Honestly, no. We never thought this would happen and the Americans would come here. But it happened.

Not everyone is happy about America's newfound friendship with the Kurds in Syria. The relationship infuriates Turkey, a long-standing U.S. ally that now shares a 250-mile border with SDF territory.

Turkey considers the Kurdish forces in Syria to be a terrorist organization, because of their deep ties to a group blamed for deadly attacks within Turkey.

Holly Williams: America has a history of partnering up with the good guys who then turn out to be the bad guys. I mean how can you be sure that's not going to happen here?

Sen. Lindsey Graham: I know what they've done. They like us. We couldn't last 15 minutes if they did not–

The SDF aren't just protecting American troops, they're also holding several hundred foreign ISIS fighters captured during the war. We were allowed into one of their prisons and got a glimpse inside a cell holding foreign extremists.

One of the SDF's ISIS detainees is Adrien Guihal, who served three years in prison in his native France for plotting with others to attack the police and a subway station. Back in France he was also a preacher. The SDF consider Guihal a dangerous terrorist. Guihal denies it and says he only worked for ISIS as a translator. A member of the SDF was present for our interview.

Holly Williams: Do you want to go back to France?

Holly Williams: And does France want you back?

Adrien Guihal (Translation): No, I don't think so. France's position is they don't take back citizens who were in the Islamic State.

Holly Williams: So what does that mean? Does that mean you could be here for several years, perhaps the rest of your life?

Adrien Guihal (Translation): It's not in my hands.

Adrien Guihal has not yet officially been charged with a crime. He and other foreign ISIS prisoners from some 40 different countries are, for the time being, in legal purgatory.

Sen. Lindsey Graham: So you've got 600-plus foreign fighters, not Syrians, and the Europeans don't wanna deal with this.

Holly Williams: And it sounds like the bottom line is that America's Syrian partners are keeping us safe from hundreds of potentially dangerous extremists.

Sen. Lindsey Graham: It's– it's a fact that they are.

Sen. Jeanne Shaheen: But it's not– but it's also not a long-term solution.

Sen. Jeanne Shaheen: We need to work with the European communities and we need to figure out long-term how we're going to deal with these detainees.

Back in Raqqa, Laila Mustafa, who runs the city's civilian council, is still dealing with a city in ruins. She told us more than two-thirds of the houses in her hometown have been damaged or destroyed, as well as schools, hospitals, and power stations.

Holly Williams: You've gone to every neighborhood, you've figured out how much money you need. Now you need the money?

Laila Mustafa (Translation): Yes, as I said, the support we are getting isn't enough to meet our needs.

Laila Mustafa told us ISIS sleeper cells remain in Raqqa. She fears the group could make a comeback, especially if the city is not rebuilt.

While we were there, the U.S. State Department had temporarily frozen around $200 million of civilian aid. In August, it was canceled.

Holly Williams: So we spoke to the new– a woman called Laila Mustafa, a 30-year-old woman who is now essentially the mayor of Raqqa. And–

Holly Williams: She said to us, "The world has a responsibility to help us rebuild." Do you agree with that?

Sen. Lindsey Graham: Her success is our success. So here's what I would say to her: We're all in to help you because if you're in charge of Raqqa, ISIS won't come back and you can live in peace with us.

Holly Williams: But she didn't get the $200 million that she needs to help de-mine and rebuild her city.

Sen. Jeanne Shaheen: That's why we're here. It's to talk about what we saw and why it's in America's interest.
America and its allies have brought ISIS to the brink of destruction in this part of Syria, but the Islamic State has been replaced, by a state of uncertainty. 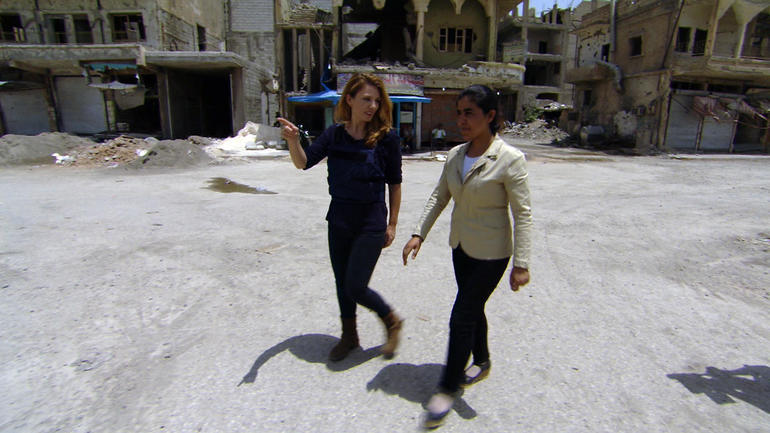 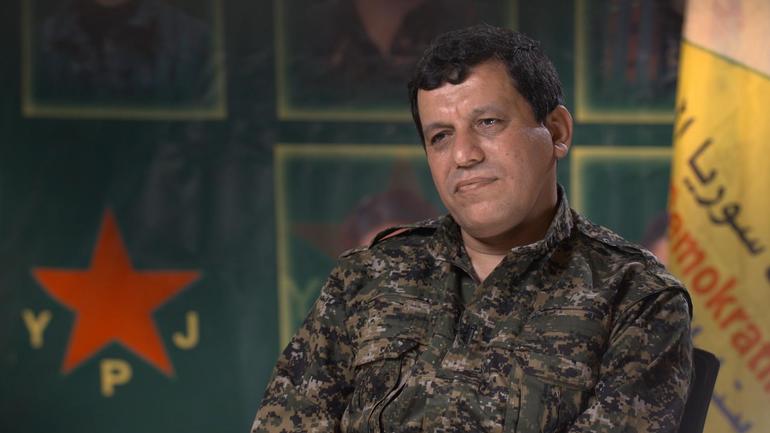 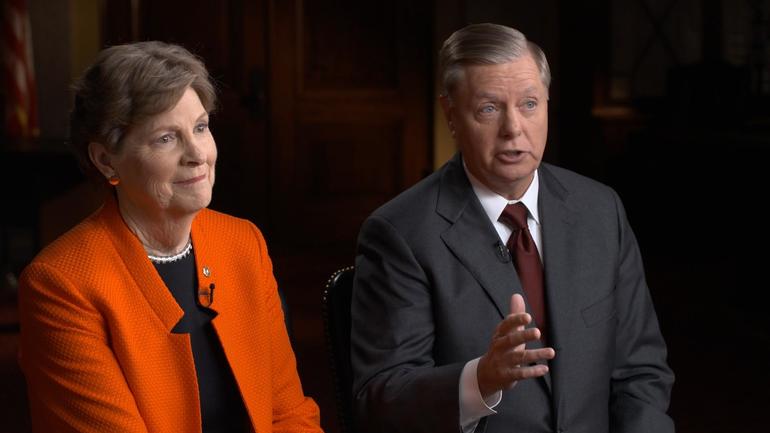 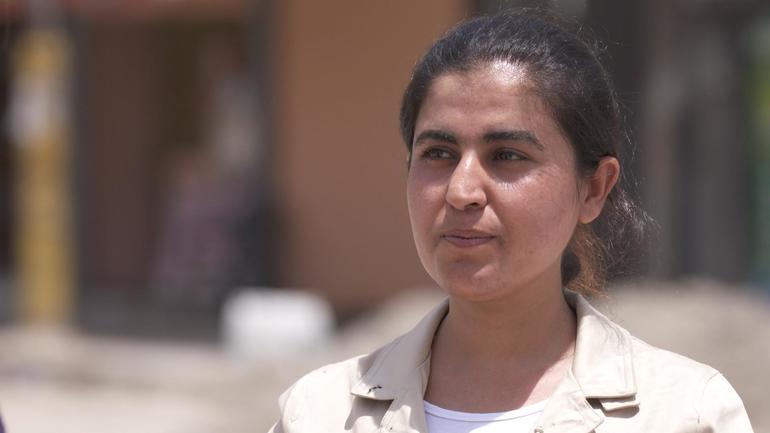 Saving the giant panda from extinction

The Smartest Dog in the World