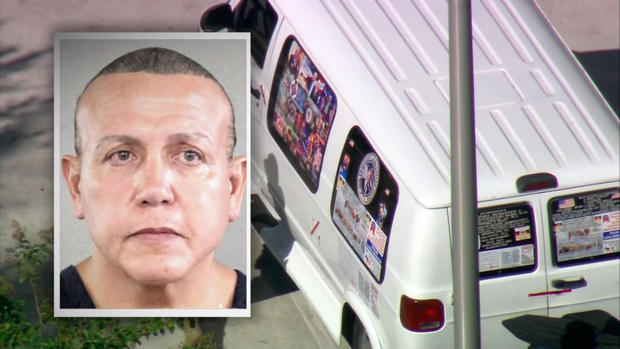 MIRAMAR, Fla. — The man accused of sending bombs to prominent Democrats is a political firebrand with a lengthy rap sheet. Suspect Cesar Sayoc Jr., 56, has a slew of arrests dating back to 1991 for theft, battery and threatening to blow up a local electric company back in 2002, telling a rep. "it would be worse than September 11th."

At the time of his arrest, it appeared the avid supporter of President Trump may have been living in a white van. That van also served as a rolling political statement, covered with targets of Mr. Trump's derision, including many of the same people who received parcel bombs this week.

The van also had a sign saying "CNN sucks," along with photos of former Secretary of State Hillary Clinton and former President Barack Obama in the crosshairs of a gun scope.

Sayoc was a prolific poster and tweeter under the name Cesar Alteri Ransazzo. He is a registered Republican who frequently lashed out at high profile politicians, actors and businessmen. He posted videos of himself at Trump rallies, and singling out many of the targets of the mail bombs including CNN.

He also seemed obsessed with his appearance, posting videos of himself working out. There were other posts, too, just of daily life.

Sayoc listed his profession as "Live Entertainment, owner" on this LinkedIn profile, and the owner of "International Gold Productions." The site said he graduated from Brevard College in North Carolina.

In 2012, he filed for bankruptcy. At the time, a handwritten note on the petition said, "lives with mom… has no furniture." He appeared to be homeless at the time of his arrest.

It was Sayoc's erratic behavior and the conspicuous vehicle that caught Marc Weiss' eye. He said Sayoc would park his van at 6 a.m. near the beach in Hollywood.

"He would strip down to basically his underwear and walk down the street and shower right here," he said.

According to officials, Sayoc has been charged with five federal crimes and could face up to 48 years in prison. 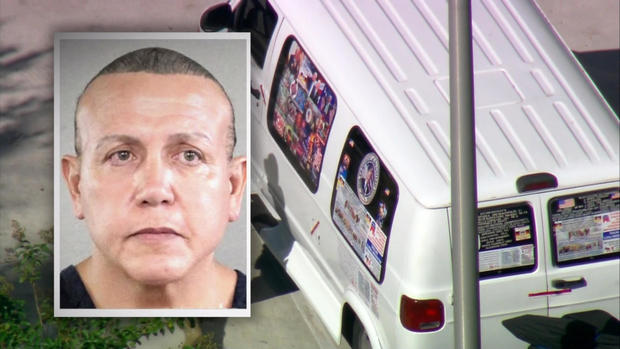