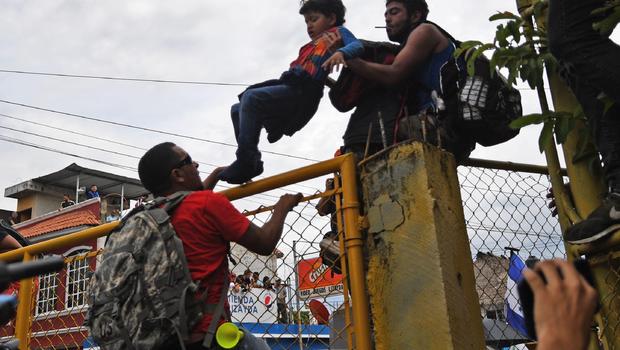 WASHINGTON — Two weeks before the midterm elections, President Trump doubled down Tuesday on his claim, presented without evidence, that terrorists "could very well" be hiding within the caravan of Central American migrants heading toward the U.S. He also explained why he now calls himself "a nationalist."

Late Tuesday afternoon, Mr. Trump insisted he has "very good information" and proof to back up controversial claims he has made about the caravan of migrants heading to the southern border.

Vice President Mike Pence said the president of Honduras told him the caravan was financed at least in part by Venezuelan leftists, eliciting an unsubstantiated allegation from the president.

"We're going to find out about that," Mr. Trump said.

Mr. Trump also defended his promise of a second round of tax cuts, saying Monday there would be a vote in Congress on a new package in mid-November.

"We'll do the vote after the election," Mr. Trump said Monday.

A few hours later, he moved up the deadline.

"It is going to be put in next week. Ten percent tax cut," Mr. Trump said at a Monday night rally in Texas.

And then Tuesday, Mr. Trump said: "We are putting in a resolution probably this week, I think you folks know about it."

Rep. Kevin Brady, chairman of the Ways and Means Committee, said in a statement that Republicans will work with the White House.

"Over the coming weeks to develop an additional 10 percent tax cut," Brady said.

The president was also asked to clarify a comment made at Monday night's rally, where he said: "You know what I am? I'm a nationalist."

Critics called it a rallying cry for white nationalists.

"I've never even heard that … I cannot imagine that," Mr. Trump said Tuesday. "But I'm somebody that loves our country."

With just 14 days before Election Day, the Trump campaign announced Tuesday it will spend more than $20 million on the midterms, with new national TV and digital ads starting Monday. Mr. Trump will also hold at least 10 more rallies. So far, he has three on this week's schedule.