If more voters cast ballots in the upcoming midterm elections, U.S. businesses can take some credit.

"The largest coordinated get-out-the-vote campaign in corporate American history" could help bring about the highest turnout in 25 to 50 years on Nov. 6, according to Mike Ward, TurboVote program director at Democracy Works, a nonpartisan group devoted to increasing voter participation.

Consumers, more of whom are unaffiliated as Republican or Democrat compared to years past, now look to brands they've built relationships with to fill in the civic-minded void once dominated by political parties and service organizations like Lions Clubs or Rotary International.

"We're in a place right know where the American public wants to get engaged in civics, and those traditional civic institutions don't exist in the way they once did," Ward told CBS MoneyWatch.

TurboVote, which helps people register and offers general election information such as polling locations, started in 2012 and hit 1 million users five years later. Thanks in large part to corporate involvement, it now has more than 6 million users.

Of the more than 3 million people that used TurboVote for help in registering to vote, more than 90 percent came via one of the platform's corporate partners.

"It just so happens that social-media platforms have the widest reach," said Ward, pointing to Snapchat as a case in point.

"You want to meet people where they are. In 2018, that's on their phone," added Brandon Naylor, a spokesperson for Democracy Works.

Snapchat is among dozens of companies that have partnered with Democracy Works in pointing users, customers and employees to TurboVote. After answering a couple of questions regarding voter eligibility, you get directed to state and local election boards to officially register.

As of Monday, 628,426 Snapchat users had signed up to receive election reminders from TurboVote, which also assisted 418,206 Snapchat users with voter registration in 2018. A majority of Snapchat users who signed up for TurboVote were between 18 and 24 years old. The 10 states with the most TurboVote signups involved battlegrounds: California, Florida, Georgia, Illinois, Michigan, North Carolina, New York, Ohio, Pennsylvania and Texas.

"We're working hard at Snap to engage, inspire and register eligible voters this election season through creative, product-driven launches," Jennifer Stout, Snap's global head of public policy, said in an emailed statement. "Voting is one of the most important forms of self-expression we have, and we're committed to empowering our community to register and vote for their chosen representatives."

In addition to Snapchat, Facebook and Instagram also link to TurboVote, and Twitter has gotten on board for the first time this election cycle, Ward said.

Corporations "two-and-a half-years ago were — I wouldn't say resistant — but hesitant" to get involved in such activities, said Ward, who credits companies such as Patagonia for paving the way for others. As it has done in the past, the outdoor clothing company plans to shuts down its operations to give employees a paid day off to vote on Nov. 6. 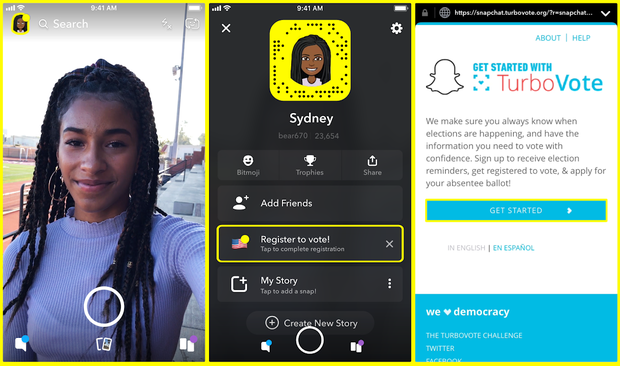 Fact-checking claims by Trump and Barr against Mueller’s report