By Kate Gibson MoneyWatch October 23, 2018, 3:57 PM This historic penny could be worth a million — dollars

Back in 1792, a newly minted U.S. cent was worth a lot more to its owner than today's penny would be. But one of the nation's original coins is another story, and one is expected to fetch in the neighborhood of $1 million when it goes up for sale on Wednesday.

The 1792 Birch Cent is a physically small, but historically large, piece of U.S. history. One of them will be sold to the highest bidder by Stack's Bowers Galleries, a numismatic auction house based in California.

This particular coin has an estimated value of $1 million, or 100 million times its initial worth, according to Stack's, which said it would offer the coin at an expo in Baltimore.

Commissioned by Thomas Jefferson, just a handful of Birch Cents were minted as an example of what the newly formed U.S. government was considering producing at the time.

It was seen first-hand by Jefferson and George Washington, and the latter was supposed to speak about the coins to Congress in the fall of 1792, but his speech writer at the time, Alexander Hamilton, inexplicably left them out, mentioning only the silver five-cent pieces that had been made in far greater quantities.

"The collector who ends up with this Birch Cent will have the satisfaction of knowing that it very likely was held by our founding fathers, making it a very special piece of American history as well," Brian Kendrella, president of Stack's Bowers Galleries, said in a news release.

Of four varieties originally made, this particular Birch Cent, classified as a Judd-3, is the only one known to exist without lettering on its edge, the auction house said. It hasn't been sold in more than 40 years. 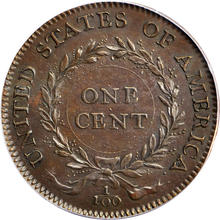