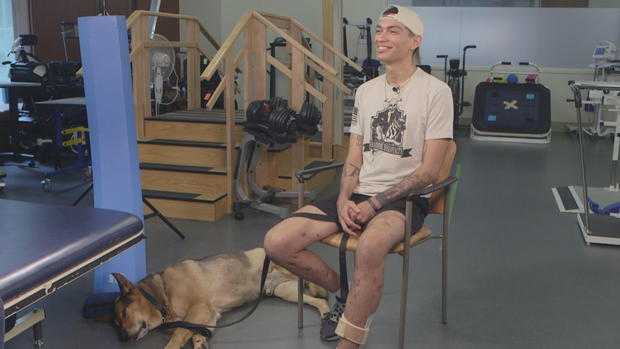 By Omar Villafranca CBS News October 22, 2018, 6:58 PM Wounded soldier embarks on road to recovery with the dog who never left his side

SAN ANTONIO, Texas — The bond between two soldiers goes beyond the call of duty. Army Spc. Alec Alcoser and his bomb sniffing dog, Alex, have spent three years together on countless missions, most recently on a tour in Afghanistan.

It was on their last mission in August that their lives were changed forever. While on foot patrol, a suicide bomber attacked. Four NATO troops were killed, and Alcoser and Alex were badly injured. But somehow, the four-legged soldier crawled over to check on his handler.

"When everything happened, he was the first thing that I saw. He was limping towards me to lay down next to me," Alcoser said. "I packed his, I saw there was a lot of blood, so I tried to stop the blood with combat gauze and I wrapped it up real quick and left it at that."

Alcoser said he didn't even think about assessing his own injuries. The 23-year-old had dozens of broken bones and shrapnel over 40 percent of his body. Alex was bleeding badly and lost one of his legs.

The two were airlifted out of Afghanistan and seperated for weeks. For their service and sacrifice, Alcoser was awarded a Purple Heart, while Alex received the K-9 equivalent: the Purple Paw. The ultimate reward came weeks later when both soldiers were healthy enough to see each other.

CBS News was there when the two started their new mission: Joint physical therapy.

"I want to be next to my dog. I want to be able to walk him out. Go running with him. Do all the stuff that we used to do," Alcoser said. "We give everything to the Army. We love our country and we love serving."

The two love each other so much, Alcoser adopted his former battle buddy.Their last mission is to never walk alone. 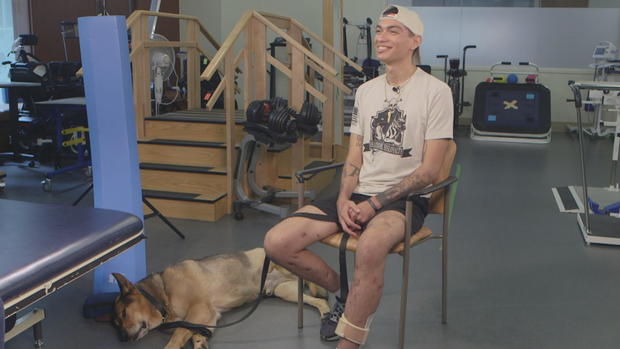