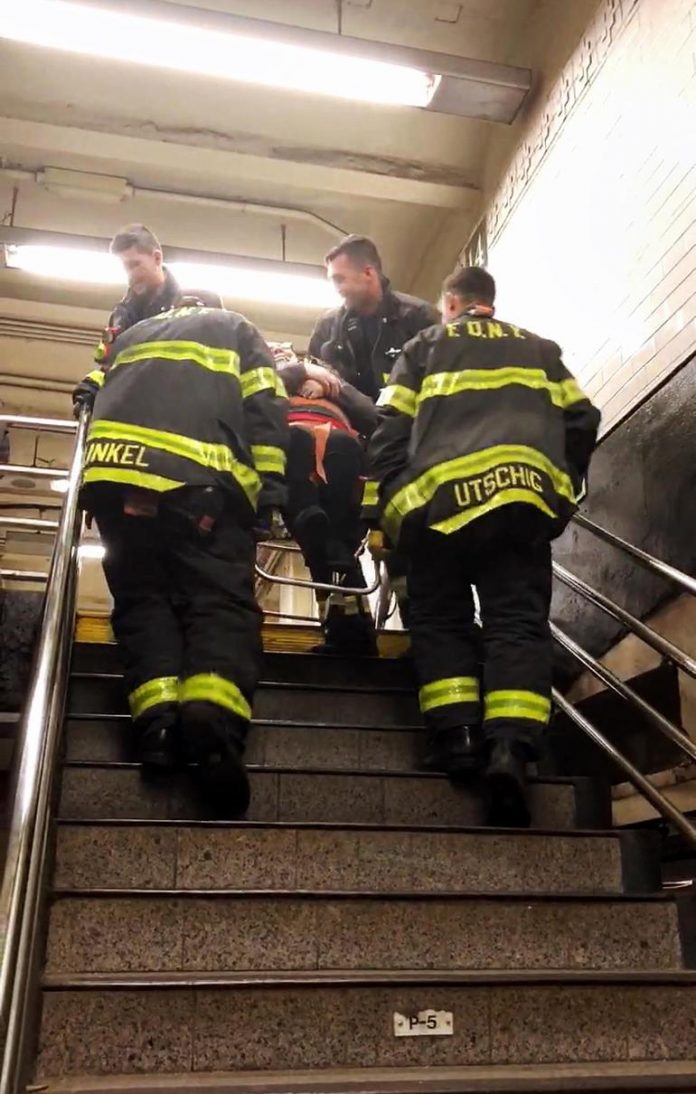 Broken elevators, muffled announcements, a lack of Braille—the transit system can be commuting chaos for riders with disabilities

Emily Ladau was panicking. It was rush hour, and she was on her way to an event at the Strand Bookstore in New York City. She had just arrived at the Union Square subway station, which is a feat in itself. Ladau uses a wheelchair because she has Larsen syndrome, a congenital skeletal disorder, and since she lives in West Babylon on Long Island, she relies on functioning elevators on several train platforms before she can even get on the subway almost 40 miles away. First there's the Long Island Railroad that brings her into Manhattan, then there's the transfer at Penn Station to get on the subway. Merely arriving at Union Square is a kind of transit triumph.

But as she wheeled to the elevator on the subway platform, she noticed a sign showing the elevator was broken. The online system that keeps track of out-of-service elevators didn't indicate there was a problem; she had checked twice during the course of her commute. But now that she was on the platform, the only elevator wasn't working.

She was stuck underground.

Ladau pushed the emergency call button nearby. No one answered. She searched for someone on the platform who could help her and found two police officers, who radioed for help. Eventually, six firemen and a handful of EMTs met Ladau on the platform. They carefully lifted her out of her wheelchair and into an evacuation chair, then carried her up the two flights of stairs to the outside. Then they returned to the platform to retrieve her 400-pound power wheelchair.

The entire incident, from the time she wheeled into Union Square station until she was reunited with her chair above ground, took an hour. She was late for the event.

"I'm always afraid of having that circus be repeated whenever I go somewhere," Ladau, a communications consultant, told 60 Minutes Overtime. "The anxiety of the fact that it's always a gamble is very stressful."

She's not alone in her subway stress. This week on 60 Minutes, correspondent Bill Whitaker examines the state of the New York City subway and interviews the man tasked with fixing it: Andy Byford, the new president of transit for the Metropolitan Transportation Authority. Byford's challenge is enormous. With an average daily ridership of almost six million, more people ride the New York City subway each day than fly in the United States — and they're just about as satisfied as those who fly.

"New Yorkers don't agree on much," Whitaker reports, "but there is one thing on which millions of them do agree: The subway is a mess."

It's a mess that's multiplied for riders with a disability. According to the New York City Mayor's Office for People with Disabilities, there are 928,000 people with disabilities living in the city, including 100,000 wheelchair users. That's not counting the 60 million tourists who visit the Big Apple every year who may use a wheelchair, have hearing loss, be visually impaired, or have a cognitive disability.

With 472 stations in total, the New York City subway is one of the largest rapid transit systems in the world. It's also one of the least accessible: Only 25 percent of the stations are designated wheelchair accessible, the lowest rate of wheelchair accessibility for any heavy rail system in the U.S. There are some areas in the city's outer boroughs where a rider must travel more than 10 stops before finding a station with an elevator. That's also a trek for the elderly, parents with strollers, travelers with luggage, or anyone else who cannot manage stairs.

And as Ladau can attest, those elevators can go out of service at any time. One examination of elevator outages found that each subway elevator breaks down an average of 53 times a year. Earlier this month, more than a dozen riders were trapped in an elevator for almost an hour at Brooklyn's Clark Street, a station that's reachable only by elevator.

But even when the elevator is working, that station is not handicapped accessible.

The MTA's new transit chief has an ambitious strategy to address subway accessibility. As part of his broader "Fast Forward" plan to modernize the subway, Andy Byford has pledged to make at least 50 more stations accessible within five years, so that all subway riders will be no more than two stops from an accessible station. That means a lot of new elevators. Some stations would require an elevator to go from the street to the level below with turnstiles and ticket booths, and another elevator to get down to the train platform. Then double that latter number, since many stations have separate platforms for trains running in either direction.

This summer, Byford also hired a first-of-its-kind senior adviser for accessibility for the MTA: Alex Elegudin, a wheelchair user who has been a longtime advocate for people with disabilities. After four months on the job, Elegudin has a clear-eyed assessment of the task he has taken on.

"I've learned that it's a huge system. It's super challenging. But I really believe there's a way forward. And I really believe we're going to make some positive change in the long term, but in the short term as well," he told 60 Minutes Overtime.

For now, those short-term changes are what Elegudin refers to as "quick wins." He is starting with online sensitivity and etiquette training for all 50,000 transit employees that's designed to teach best practices for interacting with customers with disabilities. He is also looking at how the MTA provides information to customers through technology, such as improving the real-time status of elevator problems.

When a customer does encounter an out-of-service elevator, like Emily Ladau did at Union Square in March, Elegudin said calling the fire department should be the "last resort." Instead, the MTA is working on sending rapid-response maintenance crews to fix the elevator when possible. When it's not, Elegudin recommends getting back on the subway, finding the nearest accessible station, and using a working elevator to resurface.

For Ladau in Union Square, the nearest accessible station was two miles away, and the temperature outside was in the 30s.

"Everybody has problems with the MTA, but this is an added anxiety that most people don't think about," she said. "And for me, it shapes my entire life."

Byford's plan to build new elevators at an additional 50 stations should increase Ladau's options. But so far, the MTA has not chosen the 50 stations that will receive them or estimated the cost for the project — nor does it yet have the money. Elegudin acknowledges the proposal is lofty.

"That is an incredibly ambitious goal," he said. "That is installing elevators at almost double the pace that we currently install. And the truth is, it's not only a financial problem, although certainly the funds have a lot to do with it, it is an engineering challenge because you have to lay the groundwork for design, for moving all the utilities, finding the right place underground."

Elegudin is hoping that, if he manages to get his "quick wins," he will prove the MTA can deliver on its promises. Short-term results, he feels, will also rebuild some of the trust that's been lost with customers.

"I believe that is the key," he said. "Because if that exists, I believe our elected officials and public officials will find the money."

"Nobody ever wants to look lost"

When marketing freelancer Sophia Boccard takes the subway downtown to meetings from her upper Manhattan apartment, she first has to use her white cane to navigate down the stairs into a dark station. Diagnosed with Usher syndrome, the leading genetic cause of deaf-blindness, she often pretends to fumble for her MetroCard to give her limited vision time to adjust to the low light. Then she walks to the front of the 145th Street platform, which does not have a way to warn her where the edge is, such as yellow tactile bumps.

She's found that the first train car tends to be the emptiest, reducing the number of obstacles in her way. However, because there are no hearing loops in the cars, which would magnetically send the audio directly to her hearing aids, she can't hear any announcements conductors make. She has to hope there hasn't been a change in service.

Boccard's condition hasn't stopped her from living an active life. But she often finds that the New York City subways don't help.

"You just want to be able to take the subway like a normal person," she said. "Nobody ever wants to look lost. It's why the [deaf-blind] community has a hard time going out on their own."

A power wheelchair user himself, accessibility chief Alex Elegudin acknowledges the difficulty. Sometimes he has to wait for one or two trains to come through the station before he feels like the gap between the platform and the train is safe enough to wheel over.

"For someone who is fully able, getting around some of our stations can be a challenge in terms of navigating," he said. "For someone who has a disability, it's that much more challenging."

For riders with hearing impairments, Elegudin is planning to add informational screens, both in stations and in cars. While some cars will be retrofitted to include screens that display announcements, riders will ultimately have to wait several years for the next generation of subway cars to have a variety of screens for messaging.

For blind and visually impaired passengers, Elegudin said adding signage in Braille is key, along with adding tactile pathways so riders can navigate their way through subway stations. He's also considering building an app that figures out where a rider is in the station, then audibly directs them to the exit or platform they need. It's an idea that would also help riders with cognitive and intellectual disabilities. But Elegudin recognizes that idea has a long way to go.

The MTA is currently facing three lawsuits about accessibility. The most recent, filed by United States Attorney Geoffrey Berman in March, accuses the agency of violating the Americans with Disabilities Act for failing to make a newly renovated subway station in the Bronx accessible. The two other class-action suits state that the MTA discriminates against people with disabilities.

Other older subway systems around the country have significantly higher rates of accessibility, one of the complaints states: Boston's system is 74 percent accessible, Philadelphia's is 68 percent, and Chicago's is 67 percent. Meanwhile, relatively newer transit systems in Washington and San Francisco are completely accessible.

"I don't think it's that we are conceptually in a different place," Elegudin said of the lawsuits. "We're saying that the system needs to be more accessible. We're committed to it."

Still, Elegudin knows that he's playing decades of catch-up in an antiquated system that operates around the clock. New York City residents are known to resist construction on elevators in their neighborhoods, and funding has been diverted to fixing more pressing issues, like signal malfunctions.

But times are changing. In the 1980s, then-mayor Ed Koch said it would be cheaper to pick every wheelchair user up in a limousine than to install elevators in subways and make city buses handicap accessible. Today, Elegudin is proud of the fact that all New York City public buses are ADA compliant. He's also buoyed by his boss's commitment to the cause. MTA transit chief Andy Byford has, Elegudin noted, made statements like "we are committed to achieving full accessibility."

"Those words never came out from the MTA before," Elegudin said.

For riders like Emily Ladau, the best they can do is stay cautiously optimistic.

"I hope it's not empty promises," she said.

To view Bill Whitaker's report about the MTA, click here. 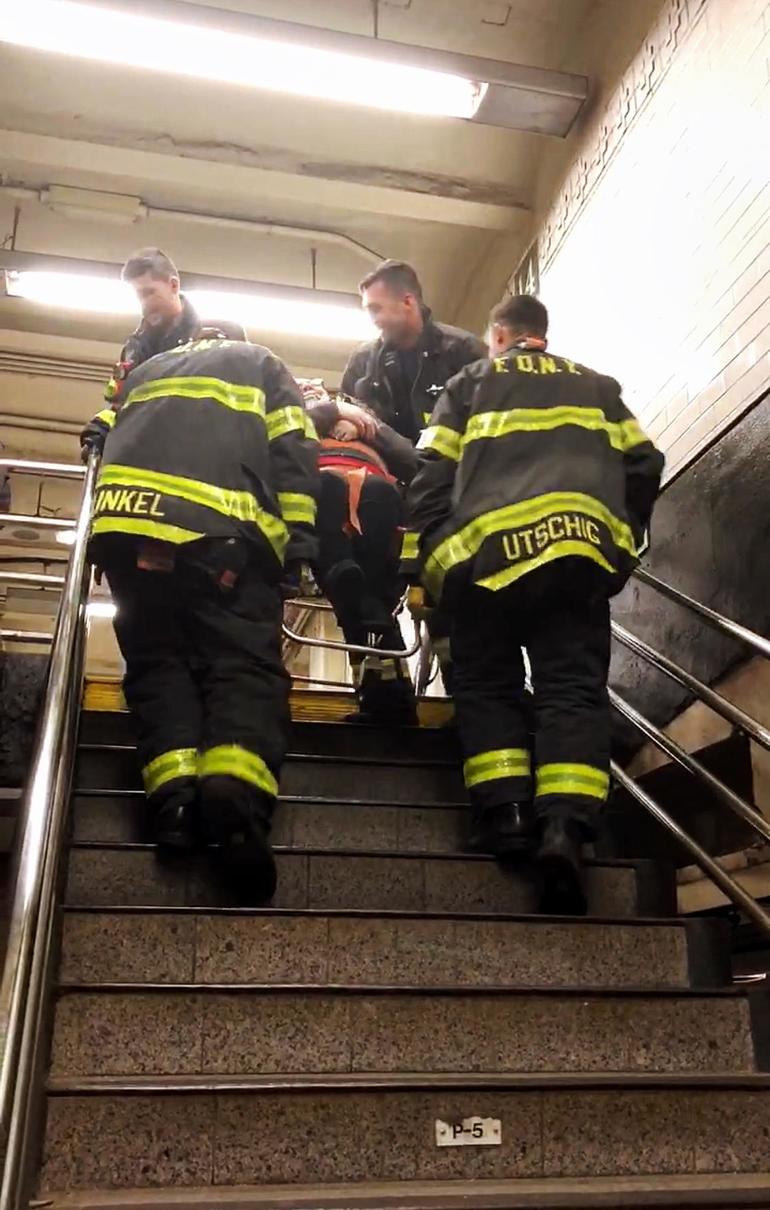 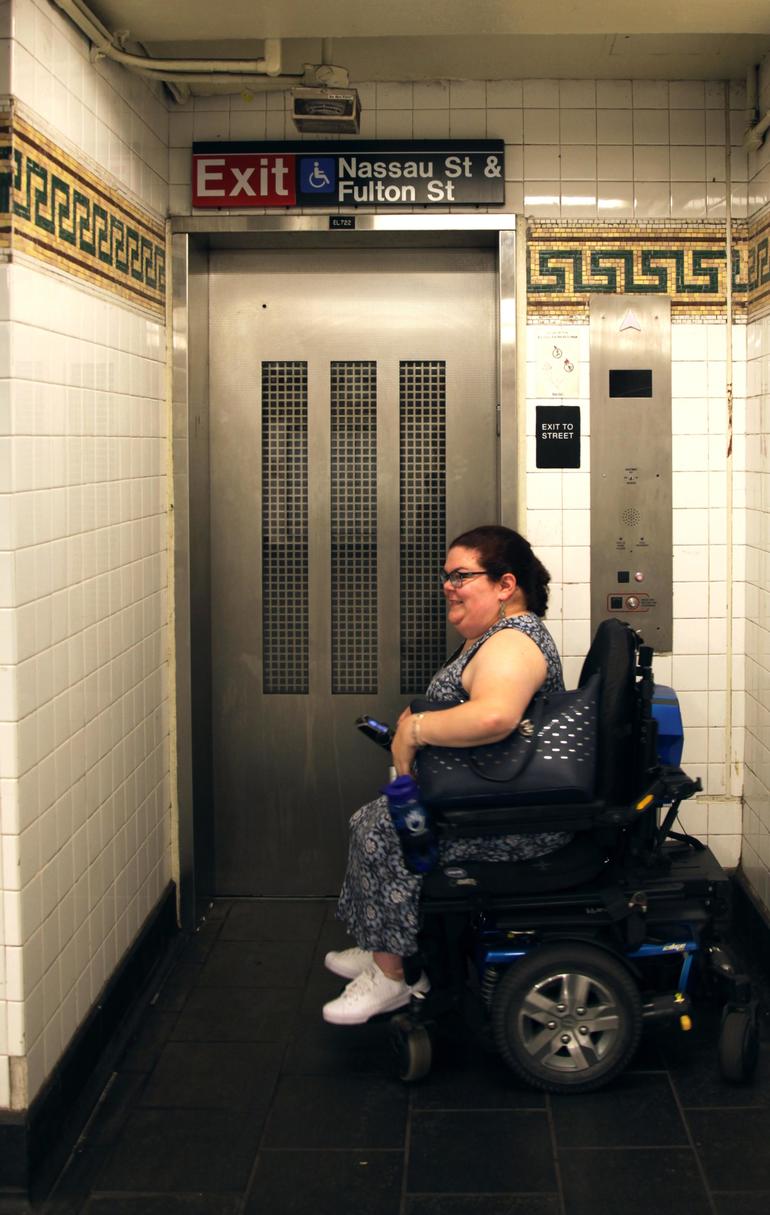 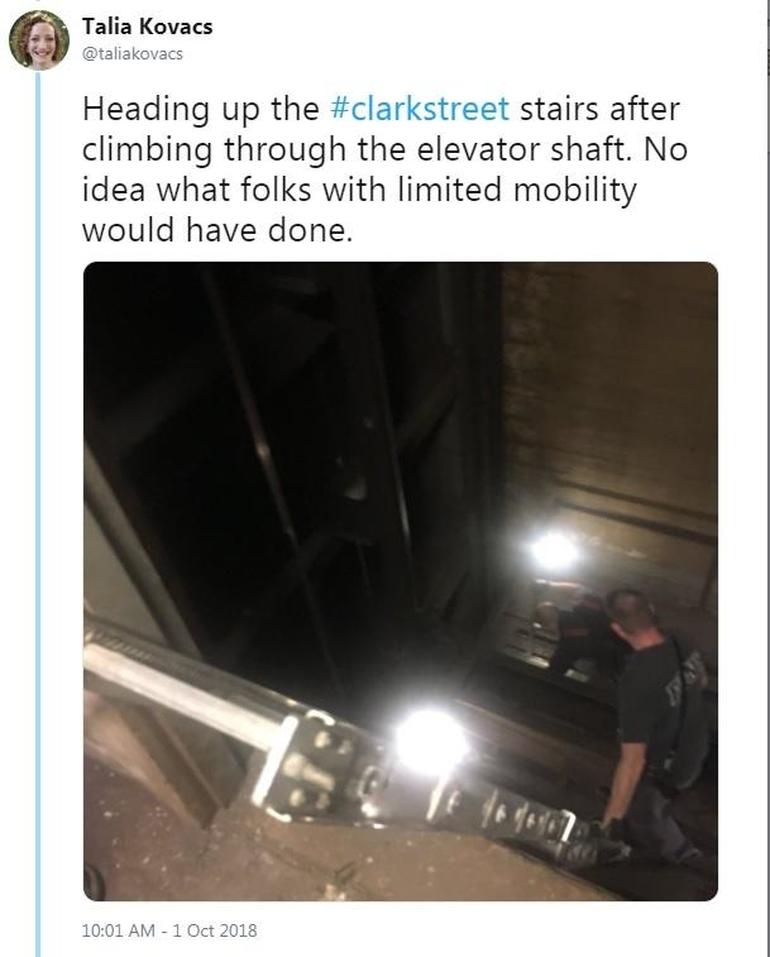 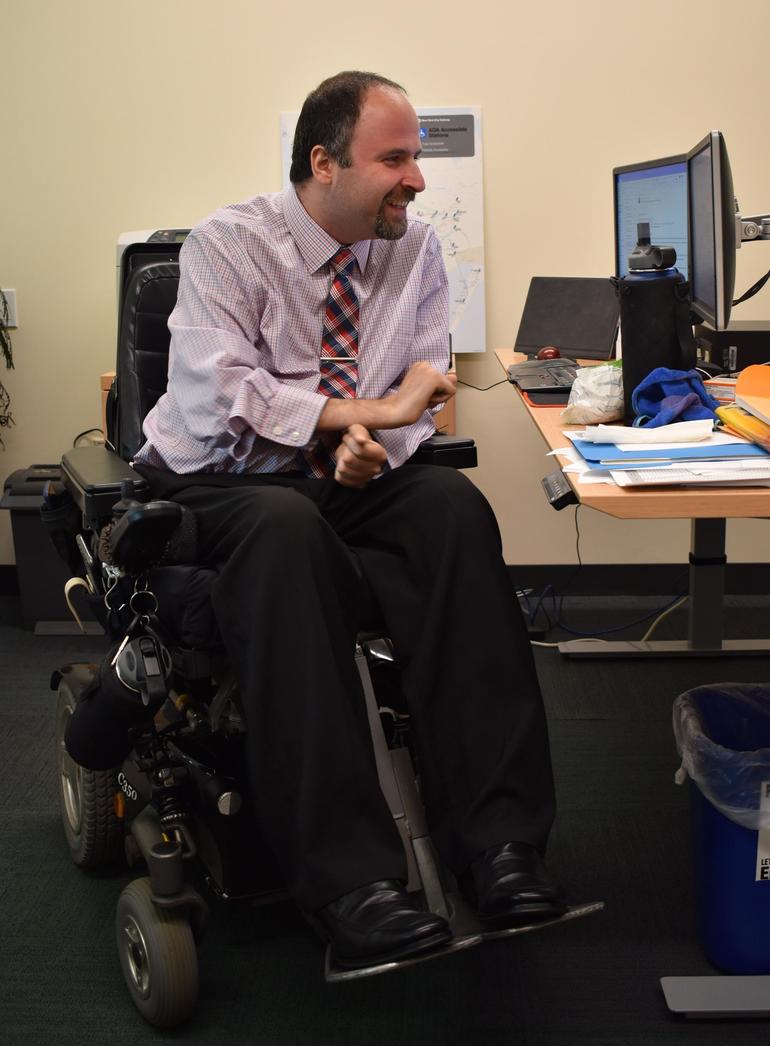 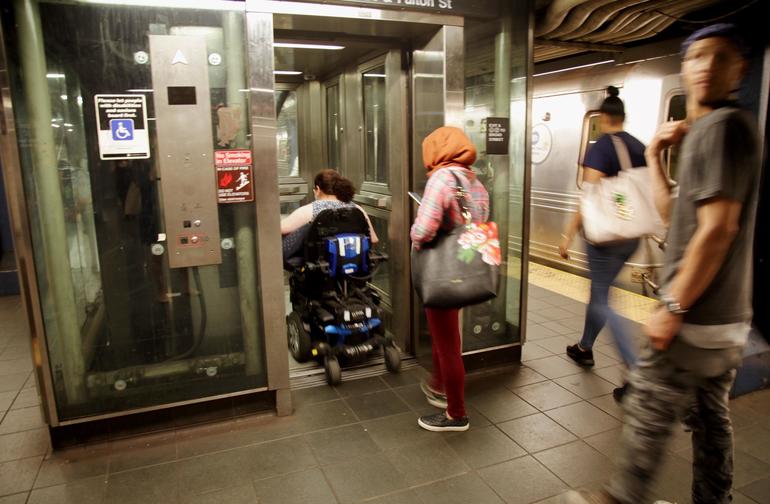 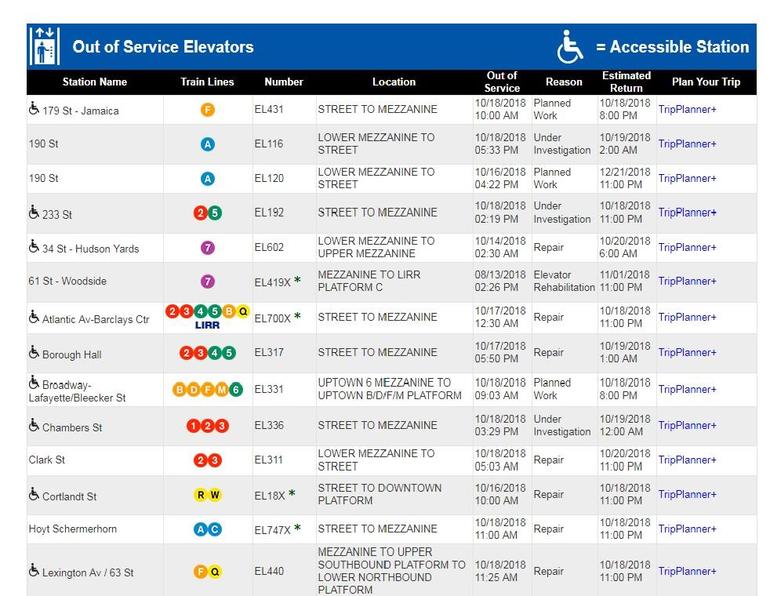 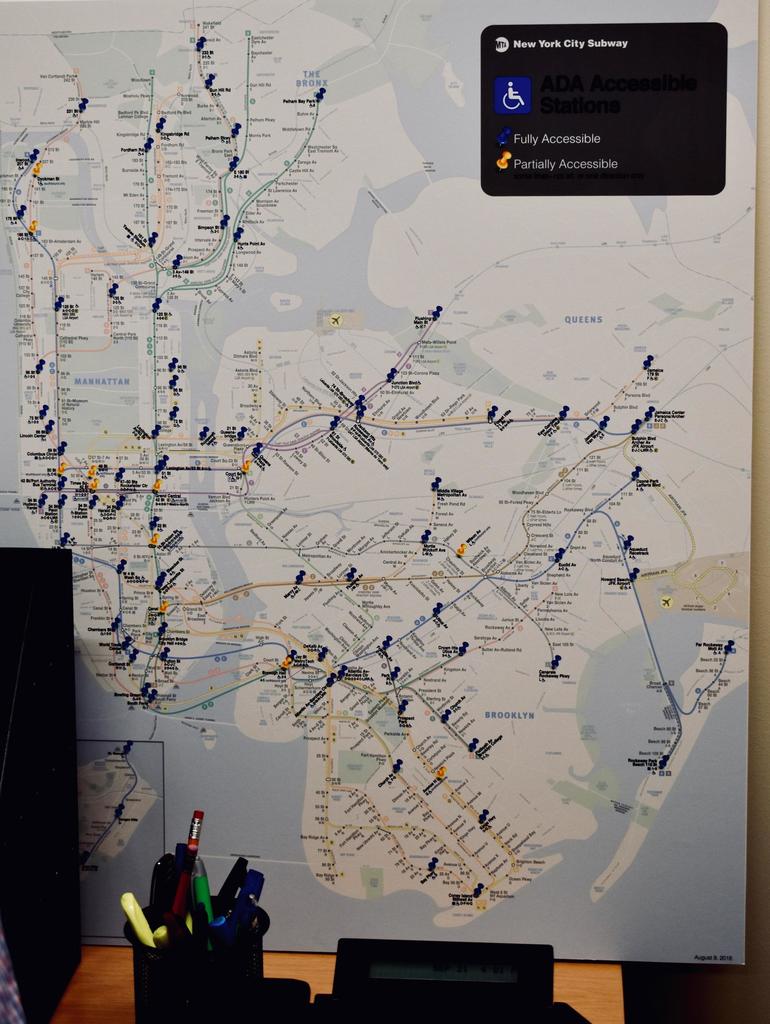 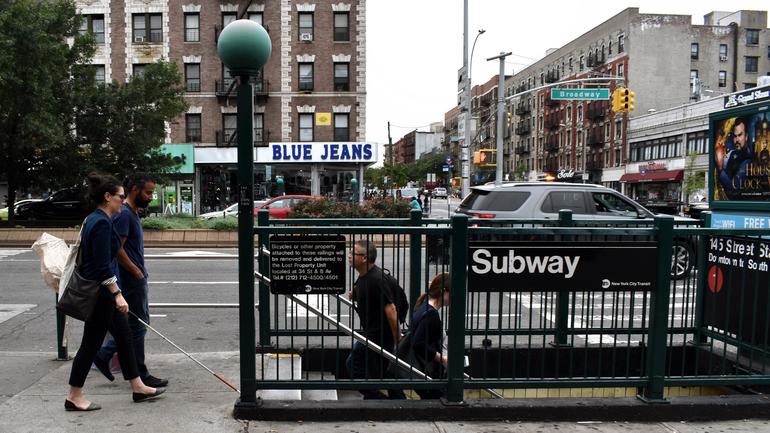 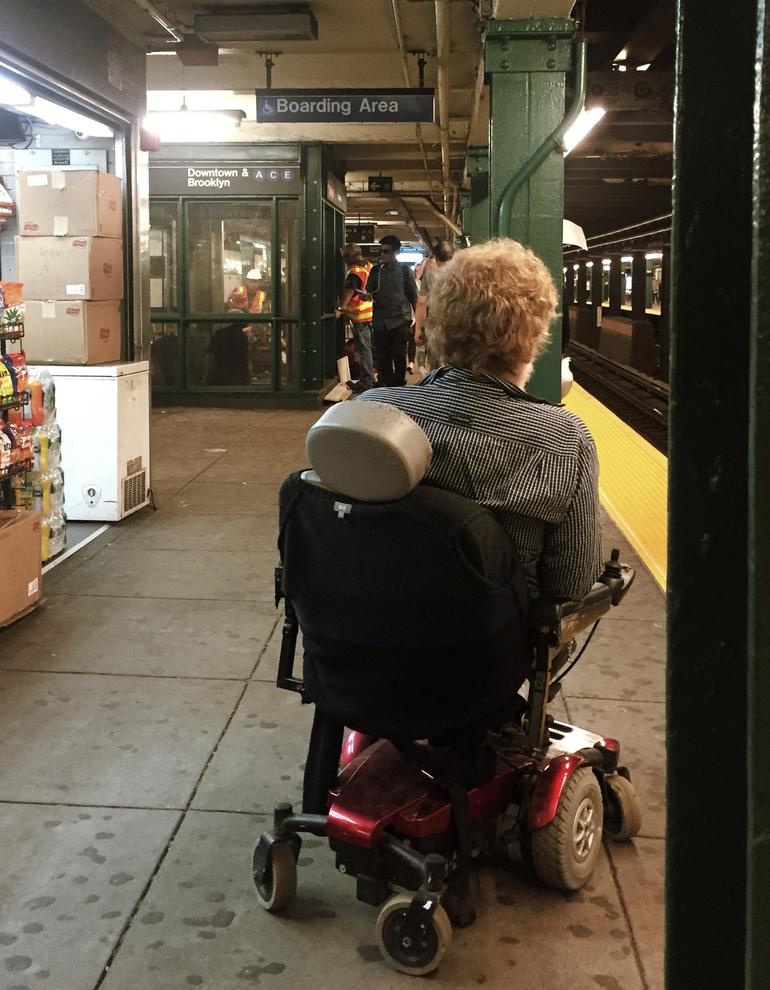 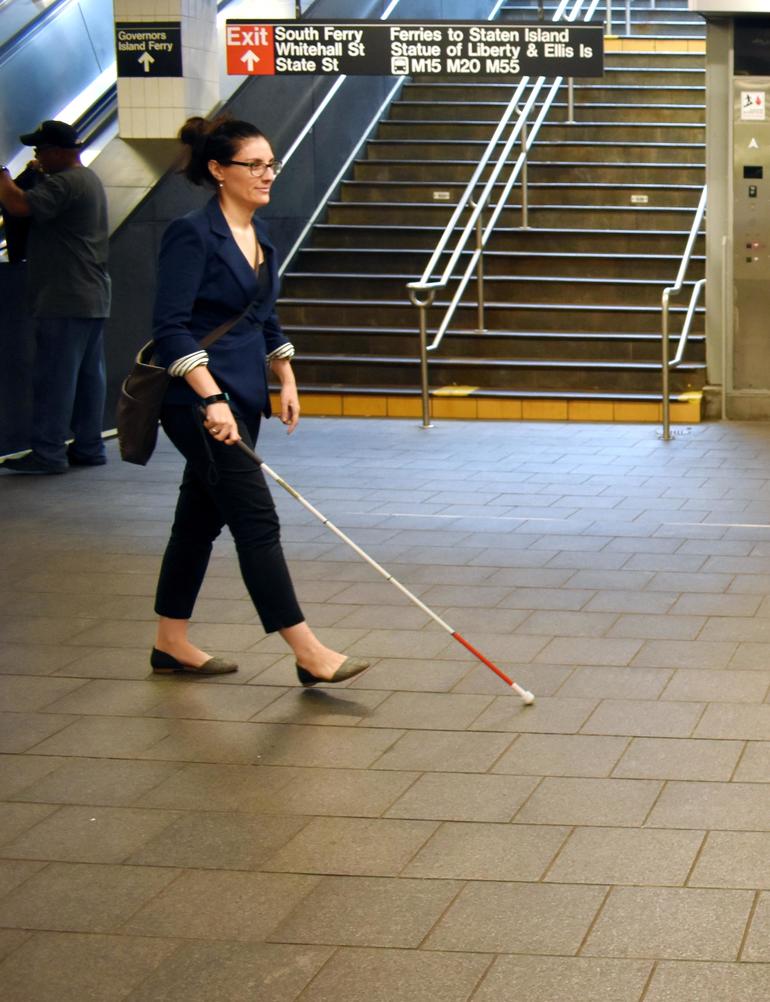