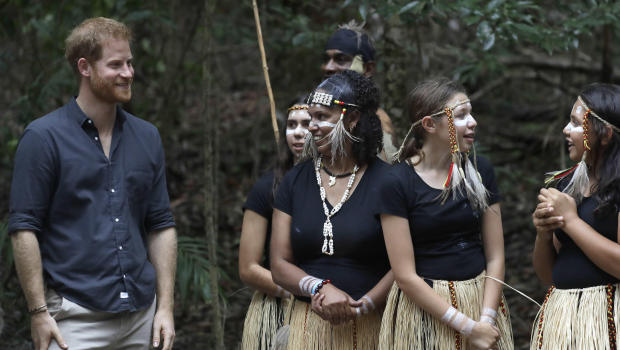 Prince Harry and Duchess Meghan's royal tour in Australia is taking an exotic turn as they go island hopping. The newlyweds are on Fraser Island, where Meghan was seen cradling her baby bump. Harry will go on solo outings while his pregnant wife rests for a few days.

On Monday, Harry made the trek into an ancient forest for a royal engagement, reports CBS News' Jonathan Vigliotti. There, he unveiled the Queen's Canopy, his grandmother's Commonwealth project to help preserve endangered habitats around the world.

"World Heritage sites play a critical role in supporting local economies and livelihoods," said Harry. "Their destruction can and is having devastating consequences that go way beyond their exceptional beauty and natural value."

The indigenous K'gari who live on the island performed a traditional dance and held a smoking ceremony to welcome Harry into a forest of trees that are over 1,000 years old.

Kensington Palace says that though Meghan is not suffering from morning sickness, she was advised to skip the forest trip because of the bumpy trek there. The palace said in a statement, "The Duke and Duchess have decided to cut back The Duchess's schedule slightly."

Meghan did make a surprise appearance on Monday afternoon as she and Harry shook hands with Fraser Island locals. The couple spent the weekend kicking off the Invictus Games, where Harry admitted to a fan that he hopes he and Meghan will have a baby girl.

On Tuesday, Harry and Meghan will leave for Fiji, then Tonga, before visiting New Zealand. 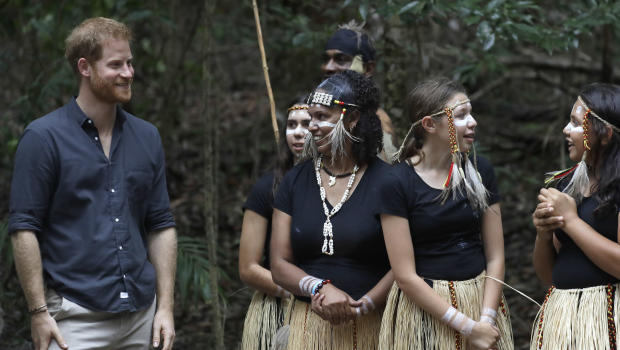