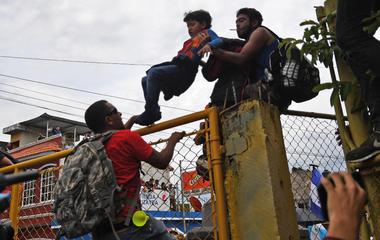 TAPACHULA, Mexico — President Trump is promising to stop a caravan of Central American migrants headed for the U.S. border. Mexican authorities said there are now more than 5,000 people in the caravan, including women and children. Most of them are from Honduras, fleeing poverty and violence.

Border security is a hot-button topic for the president ahead of the midterm elections. He again addressed the caravan at a weekend campaign rally.

On Sunday, the caravan lurched forward, carrying babies, suitcases, and hope. Advocacy groups in Central America often organize these groups because the journey alone is so dangerous. CBS News saw people walking in 100 degree heat, sweating and exhausted, but also determined to reach the U.S. border still more than 1,500 miles away.

In the rushing river of migrants, it's hard for families to stay together.

CBS News correspondent Adriana Diaz came across two sisters separated from their parents.One sister said whileshe was traveling with her mother and father, they got separated and her sister is taking care of her. The woman watching over the sisters told us they were put on a truck by their mother who then disappeared into the crowd. They've since been reunited. The truck apparently drove off before the mother could get on.

We found Karen Lanza looking for her son after he'd fallen behind. He eventually caught up, exhausted. They'd been walking for 10 days.

To get here, most migrants crossed a river between Guatemala and Mexico.

Some entered legally, through a bottle-necked bridge. Others, out of desperation, jumped off the bridge and swam across the border. We saw federal police on stand by but they did not stop illegal crossings.

When the migrants finally reached the city of Tapachula, it started to rain and everyone tried to scramble for cover. Children tried to make the best of the wet chaos. Esneyder Navila sought shelter under a tarp. He's 16, alone, and has never been to school.

"Why did you leave?" Diaz asked him.

"Because of violence, because there's no money," he said, adding he just wants to have an education.

The migrants are on the move again today. Many Diaz spoke to say they're not slowed by President Trump's threats to use the military to stop them from entering the U.S. 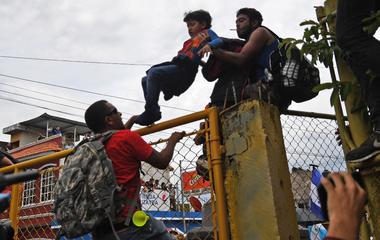