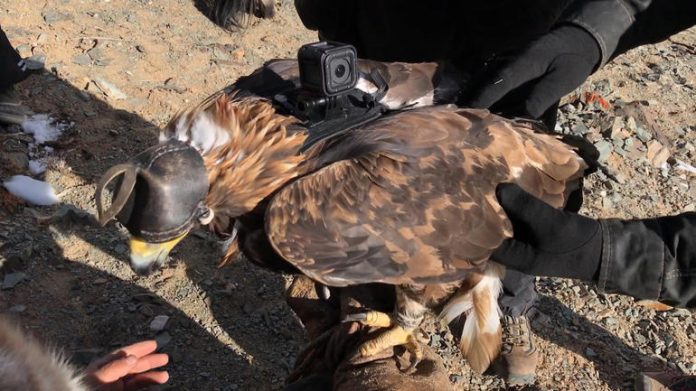 Getting a bird's-eye view of hunting eagles

To film this week's story about the last eagle hunters of Mongolia, 60 Minutes cameramen needed patience and ingenuity

Every once in a while, 60 Minutes takes viewers on an adventure to a place they've never been and likely will never go. This week's journey shows viewers one of the most far-flung places on Earth: the Altai Mountains of Central Asia, where Russia, China, Mongolia, and Kazakhstan converge.

It's also where humans and eagles come together, forming a hunting partnership that predates recorded history.

The birds are golden eagles, named for the amber plumage on their napes. The only eagles worthy of the hunt are female because they're larger, stronger, and better hunters. The human partner is traditionally male, with the exception of one remarkable woman — Lauren McGough, a 31-year-old American from Oklahoma. This week on 60 Minutes, correspondent Scott Pelley meets McGough, one of the best falconers in the world.

When Pelley and producers Nicole Young and Katie Kerbstat set out to tell the story of Mongolian eagle hunting, they knew they wanted viewers to feel like they were alongside McGough and her eagle.

"The main speaking person in our piece is Lauren," Young told 60 Minutes Overtime's Ann Silvio in the video above. "But the other main character in our piece is the eagle. And we felt like, how could we give the eagle some semblance of a voice? And it's through its flight."

The team tasked with that challenge was a South African-based crew that consists of cameramen Ian Robbie, Chris Everson, and Anton van der Merwe. Kerbstat told Overtime that, prior to leaving for Mongolia, she and Robbie were on the phone trying to figure out how to film the eagles from their perspective. As they spoke, inspiration struck Robbie. "I have a knee brace, and I have some ideas," he told Kerbstat.

When the crew arrived in Mongolia, they had to learn as they went along. Because of the elevation, the air on the Altai Mountains is thin, which caused drone cameras to crash. That's when Robbie pulled out an old neoprene knee brace that he had cut and fashioned into a GoPro harness. Although Robbie had never seen a golden eagle in person, much less held one, the device fit the bird perfectly. It's a remarkable feat, considering golden eagles have a six-foot wingspan and weigh 10 pounds.

"Which, don't be fooled if that doesn't sound like a lot," McGough told Pelley on the broadcast. "They have hollow bones, and they're mostly feathers, so 10 pounds on a bird is an enormous bird."

Robbie's device did more than fit snuggly. Strapped between the eagle's wings, the GoPro camera filmed a bird's-eye view that captured the eagle's head as it swooped down to hit a fox pelt. When the team turned the camera to the eagle's side, the result was a sense of soaring, a feeling that viewers themselves are along for the ride as they see the wing gracefully float down the mountain. 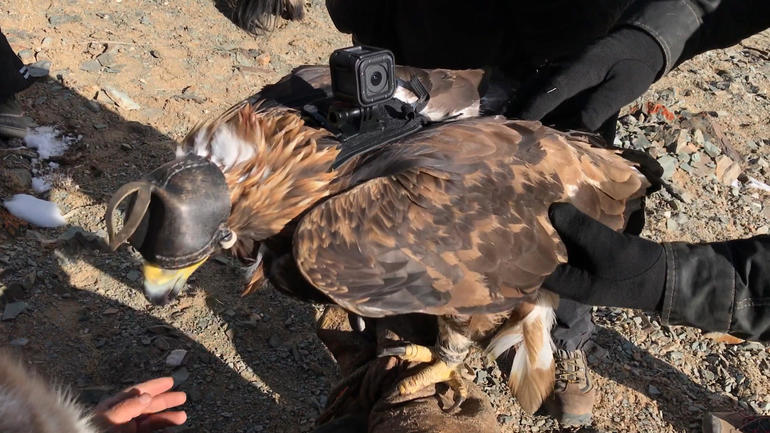