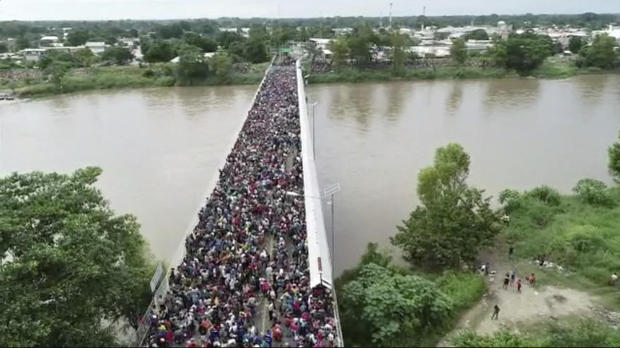 TECUN UMAN, Guatemala — A standoff between thousands of Central American migrants trying to reach the United States and Mexican police stretched through the night at Mexico's southern border, with some migrants hanging from the closed border gate wailing "there are children here." Others slept on a crowded bridge linking Guatemala to Mexico.

As of early Saturday, thousands were stuck on Mexico's southern border after a failed attempt to enter the country, BBC News reported.

Members of the migrant caravan, comprised of more than 3,000 migrants, had earlier burst through a Guatemalan border fence and rushed onto the bridge over the Suchiate River. Men and women, some with young children and babies drenched in sweat, began storming and climbing the barrier — tearing it down. They defied Mexican authorities' entreaties for an orderly crossing and U.S. President Donald Trump's threats of retaliation.

But they were met Friday by a wall of police with riot shields on the Mexican side of the bridge. About 50 managed to push their way through before officers unleashed pepper spray and the rest retreated, joining the sea of humanity on the bridge.

Police and immigration agents began letting small groups of 10, 20 or 30 people through the gates if they wanted to apply for refugee status. Once they file a claim, they can go to a shelter to spend the night.

Some migrants, tired of waiting, jumped off the bridge into the Suchiate River on Friday. They risked drowning over defeat. When asked why he wanted to jump, one 16-year-old said, "there are no jobs here."

As night fell on the bridge, the migrants' frustration turned to despair as women clutching small children took up the rows in front of the gate pleading with the Mexican federal police. Some migrants yelled "We are hungry!" Others set up tarps to prepare for the night sleeping on the increasingly dirty and befouled bridge.

"Please, it is night. Let us pass," Alba Luz Giron Ramirez, a former shop employee and mother of three, pleaded to the officers.

Giron said they had come from San Pedro Sula, Honduras, and that gangs had killed her brother and threatened her.

"We want them to give us permission to go to Mexico," her 5-year-old son Ramon said in a child's voice. "We wouldn't stay."

Alison Danisa wept as she knelt in the garbage already piling up on the bridge, clutching her naked 11-month-old infant to her breast.

"We have suffered so much. She has a fever and we brought nothing," she said, showing the baby's bare bottom to indicate they had no diapers.

A Mexican marine official with a loudspeaker approached the gate and told migrants they would be taken in trucks to "a humanitarian attention center" in Tapachula, a border city in the Mexican state of Chiapas. But the official did not say when this would happen.

Migrants have banded together to travel en masse regularly in recent years, but this caravan was unusual for its huge size, said Victor Clark Alfaro, a Latin American studies professor at San Diego State University. By comparison, a caravan in April that also attracted Trump's ire numbered about 1,000.

"It grabs one's attention that the number of people in these kinds of caravans is on the rise," Clark Alfaro said. "It is migration of a different dimension."

Elizabeth Oglesby, a professor at the University of Arizona's Center for Latin American Studies, said people join caravans like this because it's a way to make the journey in a relatively safe manner and avoid having to pay thousands of dollars to smugglers.

Late Friday night, Mexican President Enrique Pena Nieto said in an address to the nation that a large group of migrants had "tried to enter Mexican territory irregularly, attacking and even hurting some elements of the Federal Police."

"Mexico does not permit and will not permit entry into its territory in an irregular fashion, much less in a violent fashion," he said.

Mexican officials said those with passports and valid visas — only a tiny minority of those trying to cross — would be let in immediately. Migrants who want to apply for refuge in Mexico were welcome to do so, they said, but any who decide to cross illegally and are caught will be detained and deported.

Honduran President Juan Orlando Hernandez tweeted late Friday that he spoke with his Guatemalan counterpart, Jimmy Morales, and asked permission to send Honduran civil protection personnel to the bridge to help the migrants. "I also asked authorization to hire ground transportation for anyone who wants to return and an air bridge for special cases of women, children, the elderly and the sick," Hernandez tweeted.

Hernandez and Morales are expected to meet in Guatemala early Saturday to discuss the situation.

The U.S. president, meanwhile, has made it clear to Mexico that he is monitoring its response. On Thursday he threatened to close the U.S. border if Mexico didn't stop the caravan. Later that day he tweeted a video of Mexican federal police deploying at the Guatemalan border and wrote: "Thank you Mexico, we look forward to working with you!"

U.S. Secretary of State Mike Pompeo has called illegal migration a "crisis" and emphasized "the importance of stopping this flow before it reaches the U.S. border," while also acknowledging Mexico's right to handle the crisis in a sovereign fashion.

Oglesby, the professor at the University of Arizona's Center for Latin American Studies, disputed Pompeo's assertion that that there is a "crisis" of migration.

"The border is not in crisis. This is not a migration crisis. … Yes, we are seeing some spikes in Central Americans crossing the border, but overall migration is at a 40-year low," Oglesby said. 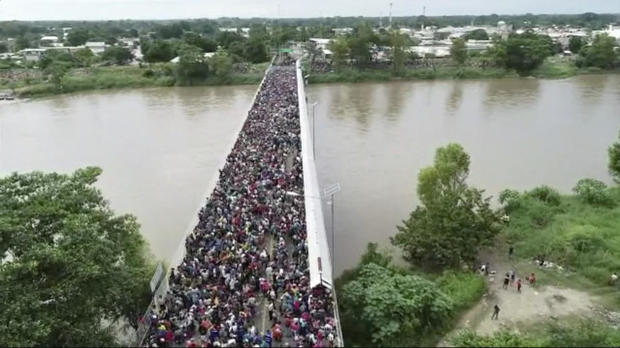 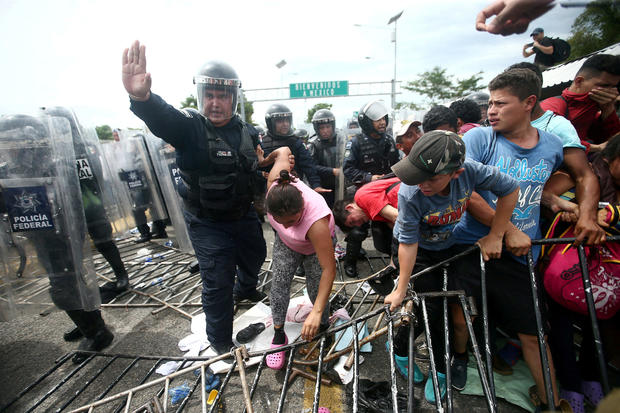 Suspected rhino poacher killed by elephant before being eaten by lions