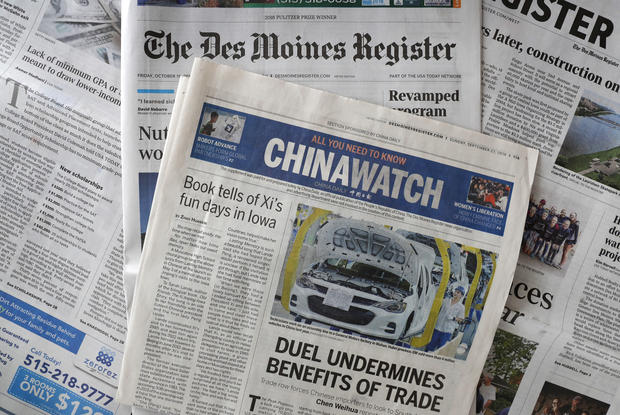 China's propaganda machine has taken aim at American soybean farmers as part of its high-stakes trade war with the Trump administration.

The publication last month of a four-page advertising section in the Des Moines Register opened a new battle line in China's effort to break the administration's resolve. U.S. farmers are a key political constituency for Mr. Trump, and Beijing has imposed tariffs on American soybeans as retaliation for Mr. Trump's tariffs on hundreds of billions in Chinese imports.

Mr. Trump said in an address to the United Nations Security Council in September that China was interfering in the U.S. midterm elections.

"Regrettably, we found that China has been attempting to interfere in our upcoming 2018 election, coming up in November, against my administration," Mr. Trump said. "They do not want me, or us, to win because I am the first president ever to challenge China on trade."

"We don't want to them to meddle or interfere in our upcoming election," he said.

China regularly disseminates propaganda in the West through its China Daily newspaper to try to influence public opinion. But the advertorial in the Register was unusual for deploying not a national publication in New York or Washington but a newspaper in the farm state of Iowa.

"It's the first time I've ever seen anything like this in a heartland city," said Matt Schrader, who edits the China Brief newsletter for the Jamestown Foundation, a Washington research institute that monitors China's actions.

The Iowa newspaper section was explicitly labeled a product of China Daily, China's official English language newspaper. The articles were clearly geared to try to soften the image of China and its president, Xi Jinping. With headlines ranging from "Dispute: Fruit of a president's folly" and "Book tells of Xi's fun days in Iowa" to Kung Fu skill helps light up life path" and "China seeks pacts on robotics," the message was a not-very-subtle one about the friendly way Beijing wants to be seen in the farm belt.

Ken Doctor, a longtime media analyst, noted that newspapers have been struggling to replace revenue lost from declining subscriptions and print advertisements moving online. He suggested that when publications run propaganda like the "China Watch" sections, they should take care to be fully explicit about the source.

"I'd like to see newspapers that run this include an editor's note to be transparent about what this is," said Doctor, who runs the Newsonomics website.

Many experts say they doubt the propaganda drive in the United States will likely succeed. Chinese officials are used to operating at home, where the central government controls all major media outlets.

"U.S. farmers and manufacturers are smart enough to understand their self-interest," said Elizabeth Economy of the Council on Foreign Relations. "They don't need a Chinese newspaper insert to tell them how to think about the relationship between tariffs and their exports to China."

Stanley Chao, a business consultant who has written a book called "Selling to China," said it's not entirely surprising that China would try to take its trade arguments directly to American farmers, whose crops have been hit by Beijing's retaliatory tariffs.

"This is the norm for the Chinese propaganda machine," Chao said.

Chao noted that when a Chinese dissident won the 2010 Nobel Peace Prize — chosen by the Norwegian Nobel Committee and an embarrassment for Beijing — China responded by placing propaganda ads in Scandinavian newspapers.

In addition to its connection to the tariffs China imposed on American soybeans and other crops, Iowa is also home to Terry Branstad, a former governor of the state who is now the U.S. ambassador to Beijing. And in the past, President Xi has visited Iowa, whose caucuses serve as the first contest in every presidential election year.

Mr. Trump tweeted a photo of the "China Watch" edition that ran in the Register, calling it propaganda and asserting that Beijing was trying to interfere in U.S. elections.

Chinese officials defended the advertising section and said it didn't violate any U.S. laws. Geng Shuang, a spokesman for the foreign ministry, said the Chinese government doesn't interfere in other countries' internal affairs or elections.

"I think there has been a long-standing effort to influence Americans across the United States," said Sarah Cook, a research analyst with the Freedom House watchdog group. "Just this particular form of influence — the China Watch paid supplement — may only be appearing in places like Iowa now."

Other countries, like Saudi Arabia and Taiwan, typically hire public relations firms and place ads to try to improve their images, in contrast to China's more direct approach of placing ads in newspapers or posting videos online. The 2016 elections brought attention to foreign influence after U.S. intelligence agencies concluded that Russia had meddled in the elections. Federal prosecutors have charged a Russian firm with interfering through bogus Facebook posts.

It's not yet clear whether or how much Beijing will continue to try to shape public sentiment in the farm belt states.

"I imagine we will see some additional efforts by the Chinese government to directly influence public opinion in the heartland," said Walter Hutchens, a global business professor at the University of Redlands in California. "However, it seems more likely their economic muscle, rather than their clumsy PR efforts, will have actual impact." 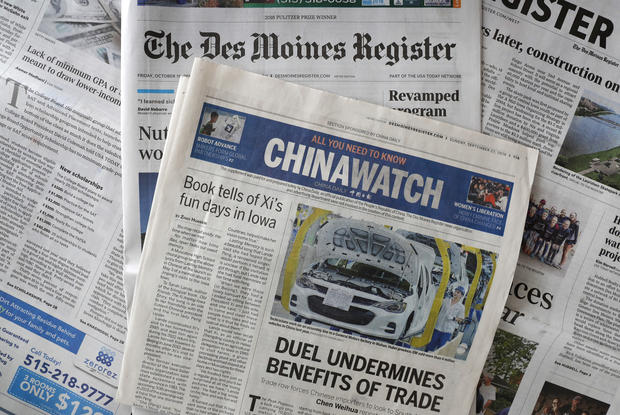