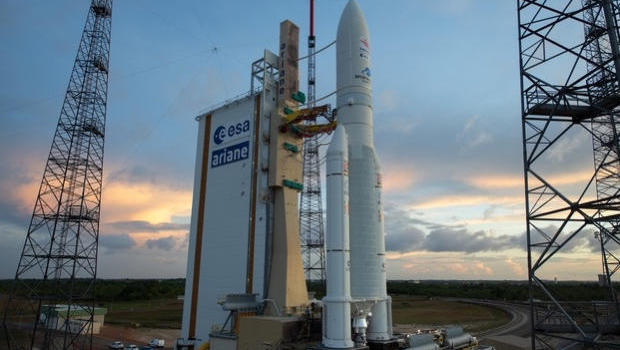 A powerful European Ariane 5 rocket was primed for blastoff Friday evening to send a pair of satellites on a seven-year voyage to Mercury. The plunge into the inner solar system will require seven planetary flybys to counteract the sun's enormous gravity and slow the spacecraft down enough to slip into orbit around hellish Mercury.

The $1.9 billion BepiColombo project is only the second, after NASA's MESSENGER mission, to attempt putting a spacecraft into orbit around the innermost planet, one of the most technically challenging missions ever attempted by the European Space Agency and the Japanese Aerospace Exploration Agency, or JAXA.

If all goes well, the two satellites, attached to an ESA-supplied carrier spacecraft known as the Mercury Transfer Module, will be released from the Ariane 5's upper stage about 27 minutes after liftoff, kicking off a long-awaited fall into the inner solar system.

While it may seem counterintuitive, it will require more energy to reach Mercury — a change in velocity of 11.5 miles per second — than it did for NASA's New Horizon's probe to reach distant Pluto.

The transfer module carrying the two satellites is equipped with ion thrusters and more traditional liquid-fueled rocket engines. But the lion's share of the needed energy will come from planetary flybys, using the gravity of Earth, Venus and Mercury to help shape the trajectory and put the brakes on, slowing the BepiColombo spacecraft enough to achieve orbit around Mercury.

The trip inward doesn't actually begin until April 2020 when the BepiColombo spacecraft races past Earth, using the planet's gravity to bend the trajectory onto a course carrying the satellites toward Venus. Two Venus flybys are planned, one in late 2020 and the other in August 2021, to deflect the trajectory toward Mercury.

But that's still not enough to do the job. Six flybys of Mercury are required over the next four years to slow the spacecraft down enough to be captured by the planet's relatively feeble gravity.

That milestone will occur in December 2025 when ESA's MPO satellite and JAXA's MMO, by then released from the carrier spacecraft, settle into different orbits around Mercury's poles.

"The cruise will be just above seven years," said ESA Project Manager Ulrich Reininghaus. "We will fly by the Earth (once), two times Venus and six times Mercury itself before we come into the orbit, which allows us to capture with the small gravity of planet Mercury against the big sun.

"That means when we fly, we constantly brake against the sun," he said. "When you fly toward the most heavy element (of the solar system) you constantly accelerate. We don't want that. That's why we decelerate."

The MPO satellite's orbit will have a low point of about 300 miles and a high point of some 930 miles. JAXA's MMO will orbit at a higher altitude, ranging up to 7,200 miles above the surface.

Once on station, the spacecraft will have to endure blistering 660-degree temperatures at Mercury's average distance of 37 million miles from the sun.

"Mercury is three times closer to the sun and therefore the radiation and the heat we're getting from Mercury is 10 times higher," said Johannes Benkhoff, the project scientist. "So everything … had to withstand the higher temperatures, but also the higher radiation doses, which we got from the solar wind. And for that, we need special insulation of our spacecraft, special materials for the antenna, for the solar panels. That was a very big challenge."

Only two other spacecraft have ever visited Mercury and only one of them went into orbit.

NASA's Mariner 10 was the first spacecraft to make the trip, flying past the planet three times in 1974 and 1975 and collecting the first close-up photos and other data at altitudes as low as 200 miles. Mariner 10 also was the first interplanetary spacecraft to utilize gravitational assist flybys, a procedure that quickly become commonplace.

NASA's Messenger spacecraft, launched in 2004, reached orbit around Mercury in 2011 and spent four years studying the planet's surface and space environment with a suite of sophisticated instruments. While extremely successful, scientists still have major unanswered questions.

Enter BepiColombo, named after Giuseppe "Bepi" Colombo, an Italian mathematician and engineer who figured out that Mercury rotated on its axis three times for every two orbits of the sun and suggested how gravity assist might be used to reach the planet,

ESA's Mercury Planetary Orbiter carries 11 instruments, including cameras, spectrometers, a radiometer, laser altimeter, magnetometer and others will focus on the planet's surface and internal composition.

JAXA's Mercury Magnetospheric Orbiter is equipped with five instruments, including a magnetometer, ion spectrometer, electron energy analyzer, plasma detectors and a camera. It is designed to map out the planet's magnetic field and its interactions with the sun.

Among the questions scientists hope to answer are:

–Mercury has a higher overall density than any other terrestrial world. Why?
–Is the planet's core at least partially liquid or solid throughout?
–Is the planet tectonically active?
–How does such a small planet maintain an intrinsic magnetic field, and how does it interact with the solar wind?
–Iron is presumably the major constituent of Mercury, but it is not seen in spectroscopic analysis. Why?
–Do permanently shadowed craters near Mercury's poles hold reservoirs of ice or sulphur?
–What produces a thin "exosphere" around the planet?

"Studying Mercury is crucial to better understand the formation of our solar system, how Earth formed and evolved and where we are coming from," said Benkhoff.

BepiColombo, he said, will help scientists "understand the nature of the planet itself."

"We want to characterize the surface, what material is on the surface, we'd like to measure temperatures, we'd like to see the interaction with the solar wind, which is special on Mercury because it is so close to the sun," he said. "Mercury has a magnetic field, which is like Earth's, a dynamo field. We would like to understand that."

Once in orbit, the BepiColombo orbiters are expected to collect data for one year with a possible one-year mission extension. 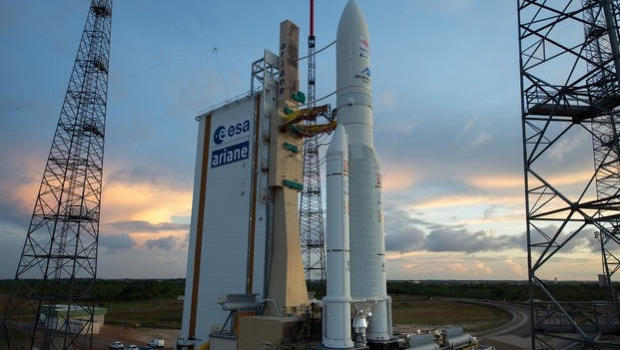 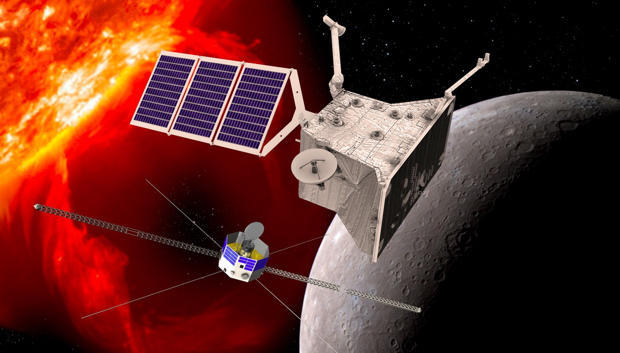