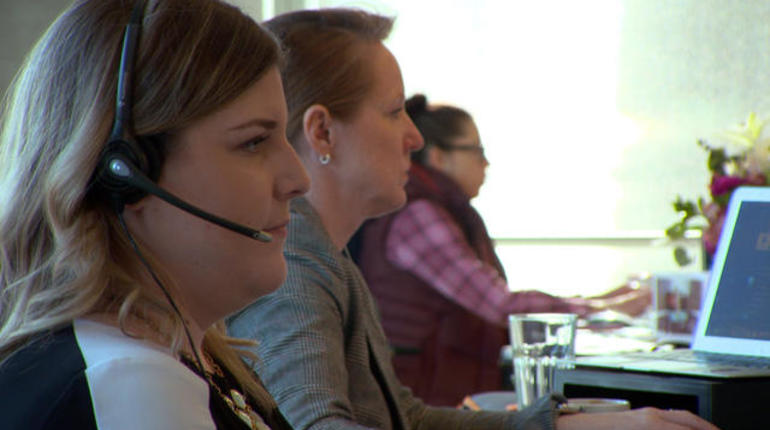 Although the U.S. labor market is the strongest it's been in decades, one group of Americans is being left behind: American women without a college degree. Most higher-paying, blue-collar jobs that offer a perch in the middle class tend to go to men, data show.

Such jobs still exist, despite the growing importance of higher education. There are roughly 13 million jobs around the country for people with only a high school degree that pay at least $35,000 to $45,000 a year, according to a recent study from the Georgetown University Center on Education and the Workforce (CEW).

But most of these jobs are held by men, said Anthony P. Carnevale, director of CEW and lead author of the report, which was done in partnership with JPMorgan Chase & Co.

Women with high school degrees are at least finding work now that unemployment has fallen to 3.7 percent, the lowest rate since 1969. Yet these jobs typically don't offer middle-class wages or offer room for professional advancement, Carnevale said. These low-wage roles, such as cashiers, restaurant servers or home health aides, also generally don't come with benefits like health care or retirement savings.

The findings underscore how women are overlooked in the narrative about blue-collar jobs, which tends to focus on men and the loss of manufacturing work, Carnevale said. "The image of the Trump voter is a blue-collar industrial worker who was doing well, and then the bottom fell out. But the bottom also fell out for women. Women lost a lot of manufacturing jobs, and they also lost clerical jobs."

Driving that change are shifting trends in the workforce, as well as "up-credentialing," or when a job that previously was open for high school grads now requires a college degree. That's partly what is happening to secretarial work, with one study finding that almost seven of 10 job ads for executive secretaries called for college grads.

Women who want to secure a "good" job are now likely to need a college degree, Carnevale said. That may explain why more women than men are today enrolled in college, as young women respond to economic necessity by seeking higher education.

Finding a path into the middle class

Although the pool of higher-paying jobs for high school grads is shrinking, Americans without a college degree can find another pathway into the middle class. People who earn certificates, licenses or an associate's degree in a specific trade can find jobs that offer annual average salary of $56,000, Georgetown found.

These middle-skill jobs include occupations such as firefighters, electricians, repairers, and health care technologists, the study found. There are some 12 million of these roles around the U.S., with good jobs growing fastest for workers with associate's degrees.

Not surprisingly, workers with college degrees have more economic opportunity, Georgetown found. Almost three of four jobs for college grads are considered "good," which Georgetown defines as occupations with median earnings of $75,000.

These jobs include a majority of professional and technical jobs, ranging from computer programmers to lawyers. The shift in the economy came in 2008, when college grads for the first time held more good jobs than those without a BA, the study found. Yet the roots of this labor-market transition stretch back to the 1980s, when manufacturing jobs began to dwindle and employers increasingly wanted to hire college grads.

These trends have led to profound changes within American society. Before the 1980s, it was easier for high school grads to climb the socioeconomic ladder. A majority of Ford's engineers "only had high school degrees," Carnevale said, recalling work he did at the automaker. "You could be a VP of Ford with only a high school degree."

Now, engineering jobs typically require a bachelor's degree in the field. "After the '81 recession, upward mobility began to fall off relatively fast," he said. "People are locked in more and more by education level."