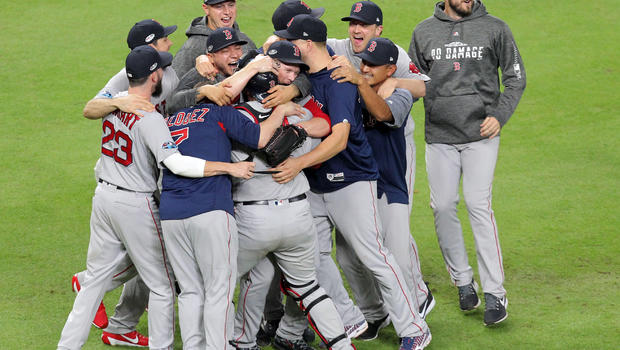 Most everything went right for the Red Sox as they sailed into the World Series. Now the big question for Boston: Is everything all right with ace Chris Sale?

"We're not perfect. That's the cool thing about this team. We feel that we can keep improving. And we have one more series to go," triumphant manager Alex Cora said Thursday night.

On his 43rd birthday, Cora became the first manager from Puerto Rico to take a team to the World Series.

The club that led the majors with 108 wins this season eliminated the defending champion Houston Astros with a 4-1 victory, taking the AL Championship Series 4-1.

After the Red Sox surrounded Cora in the clubhouse and sang "Happy Birthday!" to their rookie skipper, they began turning their attention to next week.

Game 1 of the World Series is Tuesday night at Fenway Park against the Los Angeles Dodgers or Milwaukee Brewers. The Dodgers hold a 3-2 lead in the NLCS going into Game 6 on Friday night at Miller Park.

The Red Sox will try to bring Boston its fourth crown in 15 years – this is their first World Series trip since winning it all in 2013.

"Boston is a perfect 5-0 in road games this postseason, with two wins in New York in the ALDS and three in Houston in the ALCS," notes CBSSports.com's Katherine Acquavella. "It's the Red Sox's 14th pennant in franchise history. The last three times they were AL champions, they went on to win the World Series (2004, 2007, 2013)."

Those extra days off at home will give Sale even more time to rest up.

The seven-time All-Star has been regaining strength since his release Monday from Massachusetts General Hospital, where he spent Sunday night for observation because of a stomach illness. The club hasn't specified Sale's ailment or treatment.

Cora said before Thursday night's game that the lefty ace was prepared for his next start – either in the ALCS or the World Series opener.

"We knew the skinny guy was ready for Game 6," Cora said after Price and the Red Sox finished off the Astros.

Sale went 12-4 with a 2.11 ERA this season but was limited down the stretch because of shoulder trouble. His velocity dipped in the playoffs, where he won the AL Division Series opener against the New York Yankees and also relieved in the clinching Game 4.

The rest of the Red Sox look locked in.

Price had been 0-9 with a 6.16 ERA in 11 career postseason starts before holding Houston to three hits in six shutout innings, striking out nine.

The 2012 AL Cy Young Award winner was thrilled he won't be asked again about that zero in the win column.

"That's awesome," Price said. "I don't have to prepare myself for it in spring training on Feb. 20 or September when I've still got five regular-season starts. I don't have to answer that question anymore. And man, it feels good."

"There was a lot of noise," Cora said. "I heard somebody today on TV just blasting David, blasting him, calling him the worst pitcher in the postseason. Yeah, the numbers are there, I know, but he was saying this – he didn't hesitate. It was a bad matchup, one of the greatest against the worst and all that."

"I don't listen too much to what's going on outside, but that one got me," he added. "But you know what? I'm happy that David showed up today. And tomorrow we can turn the page and move on to the World Series with David Price."

Kimbrel, who's had some shaky outings lately, threw a hitless ninth for his fifth save this postseason. Boston slugger J.D. Martinez homered and star outfielders Mookie Betts and Andrew Benintendi made running catches in the clincher.

Bradley, stuck in a slump for much of the season, batted just .200 and his three hits were the fewest for any position player to win MVP of a league championship series. But he did plenty of damage with a grand slam, two-run homer and a three-run double.

"There's nobody on this team that I can think of in baseball that deserves it more than Jackie," Price said.

"He continues to push forward through everything that he has to go through. Watching him line out, hitting balls 100-plus miles an hour routinely this year and last year, to see him get that MVP award, to get those big hits, I'm so pumped for him." 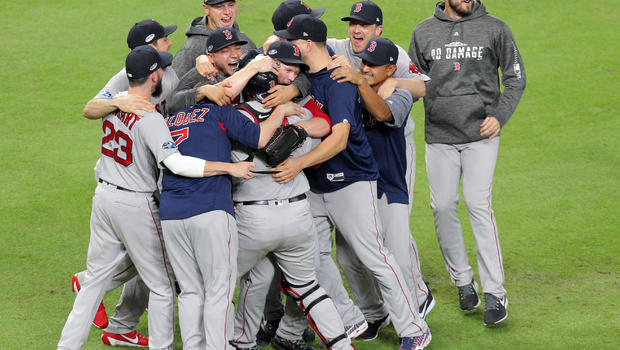 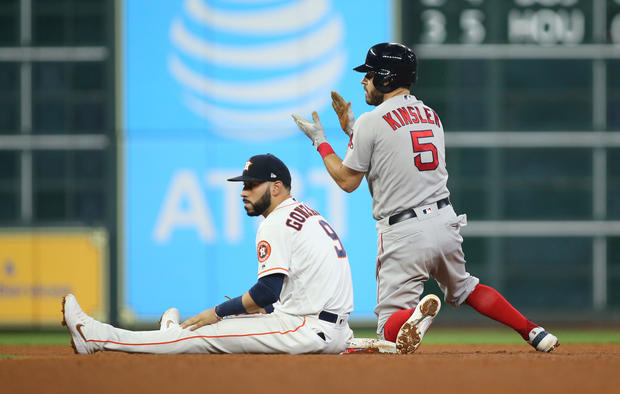