North Dakota Sen. Heidi Heitkamp, one of the most vulnerable Democratic senators up for re-election this year, faced off against her Republican challenger, Kevin Cramer, for their first debate Thursday evening. They had agreed to three debates this month, but the first was canceled because of the Senate vote to confirm Brett Kavanaugh to the Supreme Court nomination.

Heitkamp has recently taken heat for publishing a newspaper ad which named several women who had been sexually assaulted without their permission. Heitkamp apologized for the ad, but Republicans have pounced on her already teetering campaign.

Heitkamp began the debate by immediately addressing the ad. "I not only disappointed many North Dakotans, I disappointed myself," she said. "I cannot begin this debate without acknowledging this grave and horrible error."

The ad, released this week, was structured as an open letter to Cramer, chastising him for comments he made during Kavanaugh's confirmation process. In September, Cramer questioned whether the sexual assault allegations against Kavanaugh disqualified him from serving on the court, even if they were true. Heitkamp voted against Kavanaugh's confirmation, a risk in her deep-red state.

"In an attempt to bring awareness to this issue and push back against dismissive comments toward sexual assault survivors by Kevin Cramer, our campaign worked with victim advocates to identify women who would be willing to sign the letter or share their story," Heitkamp said in a statement. Cramer responded it was a "revictimization of victims."

Answering a question posed to Heitkamp about the contentious nomination process for Kavanaugh, she said, "This process created a scene in Washington, D.C., and across the country that was inappropriate. It was unseemly and was not becoming of either the Senate or the Supreme Court.."

Kramer added, "The process was hijacked by a mob whose only issue is to continue to allow abortion on demand. And to do that, they would do anything. Chuck Schumer stated in advance we must do anything to stop this nominee from being confirmed."

The largely well-mannered debate addressed several key issues in North Dakota and in the country, such as protecting health coverage pre-existing conditions and President Trump's tariffs. Heitkamp said she would "fight, fight, fight for our farmers," criticizing the president's tariffs for closing off a market to North Dakotan farmers. Cramer touted the new trade deal with Mexico and Canada in response.

"This is a cultural issue," Cramer said. "I think it deals a lot with our law enforcement, it can deal a lot with how we treat employers, HR officials … to make it more comfortable for women to come forward."

Heitkamp said, "[Sexual assault] is way under-reported. It is way under-investigated. It is way under-prosecuted. Many women who have contacted my office have told me over and over again that if they did report it, they wish they hadn't and when they did report it they knew that it would bother them the rest of their life if they didn't get justice. It is time for us to quit talking across party lines and start working together to develop a world where women feel safe … we must stand together against sexual assault and sexual violence.

Heitkamp has been significantly down in the polls throughout her campaign. A recent Fox News poll showed her trailing Cramer by 12 points. The CBS News Battleground Tracker rates the race as "edge Republican."

Heitkamp won by just a few thousand votes in 2012, in part because of the support of many Native American voters. However, a recent Supreme Court ruling has now made it more difficult for Native Americans in North Dakota to vote, which could also affect Heitkamp's re-election prospects. 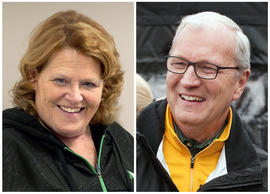 Biden to answer “America first” with his own foreign policy plan