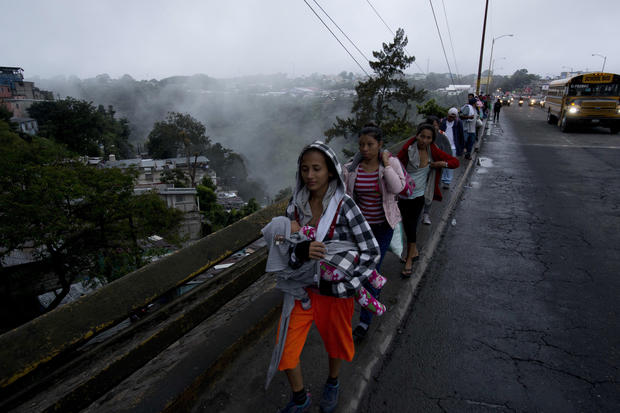 GUATEMALA CITY — As about 3,000 Hondurans made their way through Guatemala, attention — and pressure — turned to Mexico Thursday, after U.S. President Donald Trump threatened to close the U.S.-Mexico border if authorities there fail to stop the impromptu caravan. "I must, in the strongest of terms, ask Mexico to stop this onslaught – and if unable to do so I will call up the U.S. Military and CLOSE OUR SOUTHERN BORDER!," Trump tweeted.

He went on to say, "The assault on our country at our Southern Border, including the Criminal elements and DRUGS pouring in, is far more important to me, as President, than Trade or the USMCA."

Mexico dispatched additional police to its southern border, after the Casa del Migrante migrant shelter in Tecun Uman on the Guatemalan side of the border reported that hundreds of Hondurans had already arrived there. Mexican officials say the Hondurans won't be allowed to enter as a group, and would either have to show a passport and visa — something few apparently have — or apply individually for refugee status, a process that can mean waiting for up to 90 days for approval.

Mexico's Ambassador to Guatemala, Luis Manuel Lopez Moreno, met with leaders of the caravan Wednesday and warned them that Hondurans caught without papers in Mexico would be deported. But the idea that Mexico could close its porous southern border — or that the United States would choke off the hundreds of thousands of legal freight, vehicle and pedestrian crossings every day — strained the imagination. And, much like Guatemala, Mexico is itself a country where many have migrated, raising the question of whether the political will for a confrontation exists.

Mexican President-elect Andres Manuel Lopez Obrador, who will take office on Dec. 1, wants to avoid repression against migrants and also avoid angering the United States. He has long pushed economic development as a way to keep people from migrating, and on Wednesday he said, "We will offer jobs, work to Central Americans. Anyone who wants to work in our country will have help, will have a work visa."

As the caravan strung out from Guatemala City to the border, it was unclear whether those who made it the farthest would wait for their countrymen to arrive to attempt a mass crossing into Mexico. The caravan, fairly compact in recent days, has dispersed a bit, with different bands of people seen walking together in a line, some boarding buses or trying to hitch rides.

Mauro Verzzeletti, a priest who runs the Casa del Migrante shelter in the Guatemalan capital, said about 3,000 people slept there overnight and left around 4 a.m. to continue the journey, adding that "more are arriving."

All along the way in Guatemala, the Hondurans found solidarity. More than 2 million Guatemalans live in the United States, and locals here saw the Hondurans streaming in front of their homes and businesses with dreams of making it to the U.S. as their Central American brothers and sisters.

Sweaty, sunburned and exhausted, Jonathan Zuniga had been carrying his 1-year-old baby in his arms for five hours when help arrived unexpectedly from a local woman who offered him a used baby carriage.

"Thank you, thank you very much," Zuniga told her, accepting the gift with a broad grin. "I couldn't stand it anymore."

"We are all human beings," said Deidania Cabrera, the woman who offered the carriage to Zuniga. Outside her wood-frame business, she had also set out children's clothing and baby carriers. "It is moving, above all seeing the babies, so tiny, who are traveling."

Residents offered them food, water and rides in pickups or on flatbed of semi-trailer trucks. Henry Tejeda, who hails from Puerto Colon, Honduras, stopped at the side of a highway in the eastern department of Zacapa along with a group of women and children to ask for money. From a car a man tossed a 10-quetzal bill — worth about $1.30 — saying, "So you can eat." In all, Tejeda scraped together the equivalent of about $2, enough to get a bite.

Tejeda said he had left his wife and four children behind and was fleeing the poverty and rampant violence of his country, one of the world's most dangerous by homicide rates. Four years ago his mother was murdered, and his brother was also shot.

"I am carrying the documents to prove I'm not lying," Tejeda said. "I want to seek political asylum (in the United States) and help my family."

Marta Julia Veliz, a Guatemalan, organized with about 20 neighbors in the town of Teculutan to cook in the street for migrants. They served up beef broth, rice, tortillas and coffee to migrants passing on foot who paused for refreshment at the impromptu oasis. For those who didn't get down from vehicles, the volunteers tossed them water, bread and toilet paper.

"We have been here since 4 a.m.," said Veliz. "We have given breakfast and lunch to thousands of people."

Guatemalan President Jimmy Morales said Wednesday that while Central Americans are legally free to transit from country to country under a regional agreement, a "massive ingress of people without registering" puts Guatemala in a difficult position because it's impossible to know who the people are and what may be the intentions of any of their leaders. Trump has threatened to withdraw some of the region's $2.6 billion in foreign aid if the migrants are let through. Luis Arreaga, the U.S. ambassador to Guatemala, posted a video message on Twitter to migrants thinking of entering the United States illegally.

"If you try to enter the United States, you will be detained and deported," Arreaga said in Spanish. Addressing those already en route, he added: "Return to your country. Your attempt to migrate will fail."

President Trump's zero-tolerance immigration policy became a source of controversy over the summer, after families were separated at the border. Earlier this week, the Trump administration said 66 children, including one under 5 years old, remain in custody.

The president has said repeatedly that he thinks immigration should be a top issue on the campaign trail, as the midterm elections near. Congress still hasn't allocated funding for Mr. Trump's border wall though. There's expected to be a showdown over funding for it after the midterms. 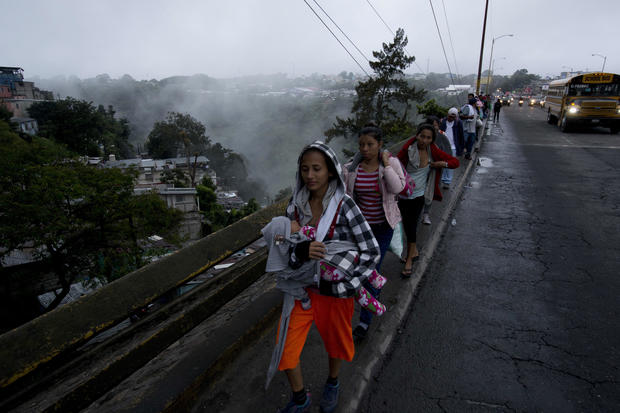