Kristen Bell says she's creeped out by some of the messaging in the classic fairytale "Snow White." Bell, who has two daughters, says she made sure to give her kids disclaimers about the story after she reads it to them.

The "Frozen" star, who is married to actor Dax Shepard, told Parents magazine that she cherishes her ritual of reading bedtime stories with her girls, saying that she wants to "feed their brain." But she said some parts of "Snow White" give her pause.

"Every time we close 'Snow White' I look at my girls and ask, 'Don't you think it's weird that Snow White didn't ask the old witch why she needed to eat the apple? Or where she got that apple?' I say, 'I would never take food from a stranger, would you?' And my kids are like, 'No!' And I'm like, 'Okay, I'm doing something right,' " she said.

Bell also said that she uses "Snow White" as an opportunity to teach her children about consent. She said she asks them, "Don't you think that it's weird that the prince kisses Snow White without her permission? Because you cannot kiss someone if they're sleeping!"

Bell, whose daughters are Delta, 3, and Lincoln, 5, frequently discusses mom life. Last year, she revealed that she begrudgingly dressed up as Elsa for Halloween, per Lincoln's request.

The actress is working on a children's book herself. Bell is also working on the newly announced "Veronica Mars" reboot for Hulu. In September, she asked fans, "Did you guys know that as of summer 2019 all the old 'Veronica Mars' episodes will be available on Hulu to stream and rewatch? Which is great because you'll need to brush up since we're making another one!"

The reboot, starring Bell, has eight new hour-long episodes focusing on a single mystery. The original show aired from 2004 to 2007 on UPN and the CW for three seasons altogether. "Veronica Mars" focused on an outcast high schooler of the same name who solves mysteries in the town of Neptune, all while recovering from the death of her best friend. Veronica's single father is a private investigator who is also ostracized in town. 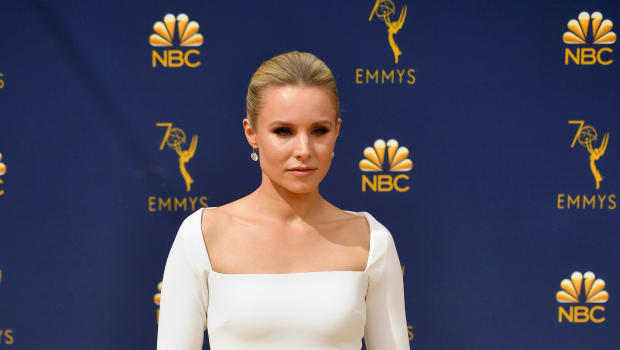