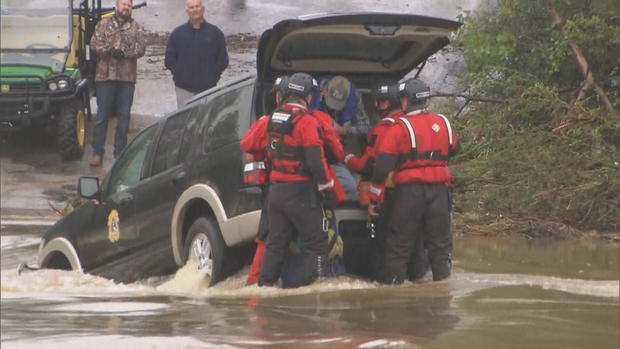 KINGSLAND, Texas — New rainfall is in the forecast for Texas, threatening hundreds more homes with devastating flooding. Several days of rain have swollen rivers and lakes to near-record levels. Flooding swamped homes and businesses, and prompted many rescues. At least two people are dead.

The homeowners were significantly unprepared for how fast the water was moving Wednesday. Most of their furniture and belongings are out on the lawn, reports CBS News correspondent Mark Strassmann.

At Scott Turner's home in Kingsland, the rush of floodwater caught he and his family completely off-guard. "I would say it probably came 5 or 6 feet in a matter of 15 minutes," Turner said.

His story is similar to ones seen across central Texas, as rising floodwaters have become increasingly dangerous. Crews have conducted several rescues – including one we came across Wednesday with two men in an SUV trapped in a ditch after they tried to cross a flooded road.

Now authorities are doing what they can to limit the damage. At Mansfield Dam, four floodgates are open to drain water from the overflowing Lake Travis. Four more are expected to open Thursday.

The current water level of Lake Travis is about 700 feet, which has already caused flooding in dozens of homes. If it rises another 14 feet, the water will flow uncontrolled from the dam, submerging entire communities.

Back upstream, Turner is just trying to pick up the pieces. He said he hopes he's seen the worst of it.

"I don't think it could get any worse," Turner said. 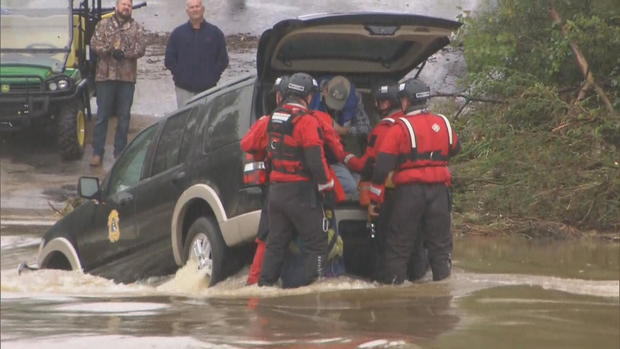