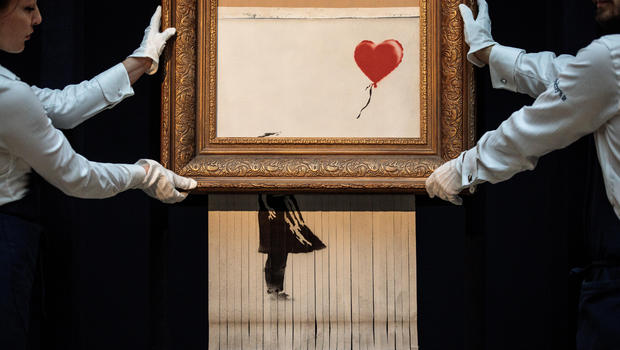 CBS/AP October 18, 2018, 2:38 AM Banksy implies he wanted his partially shredded painting to shred all the way

Banksy posted a new video to his website Monday implying the partial shredding of his "Girl With Balloon" at a London auction was supposed to have been complete. The video shows the famously anonymous artist constructing the shredding mechanism inside an ornate frame and pushing a button in a black box to activate the destruction at the auction in Sotheby's in London earlier this month.

The act shocked the crowd, but the winning bidder, a European collector, went ahead and bought it anyway for $1.4 million, according to the auction house. Sotheby's didn't name the buyer.

The partially shredded piece was renamed, "Love is in the Bin."

The partial shredding drew speculation that the act was a stunt to increase the value of the painting of a young girl reaching for a heart-shaped red balloon. The canvas was shredded to right above the girl's head, leaving the balloon intact.

But the end of the new video notes, "In rehearsals it worked every time…" A complete shredding of the same design is then shown.

The nearly 3-minute long video is titled, "Shred the Love, the Director's cut." It shows hands and a hooded figure (Banksy is fond of hoodies) constructing the mechanism in a studio space, then it rolls on to the outside of Sotheby's before the auction. People milling about sipping Champagne and nibbling hors d'oeuvres are next up, including some standing in front of the painting.

The auction and partial shredding are shown, as is the work being taken off the wall at Sotheby's and carried out of the room.

Banksy has never disclosed his full identity. He began his career spray-painting buildings in Bristol, England, and has become one of the world's best-known artists. His mischievous and often satirical images include two policemen kissing, armed riot police with yellow smiley faces and a chimpanzee with a sign bearing the words, "Laugh now, but one day I'll be in charge."

His "Girl With Balloon" was originally stenciled on a wall in east London and has been endlessly reproduced, becoming one of Banksy's best-known images.

Sotheby's quoted the buyer of the partially shredded painting as saying, "When the hammer came down last week and the work was shredded, I was at first shocked, but gradually I began to realize that I would end up with my own piece of art history."

Alex Branczik, head of contemporary art for Europe at Sotheby's, said it was "the first artwork in history to have been created live during an auction." 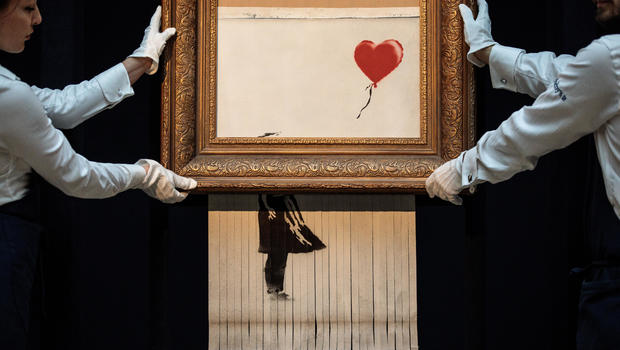