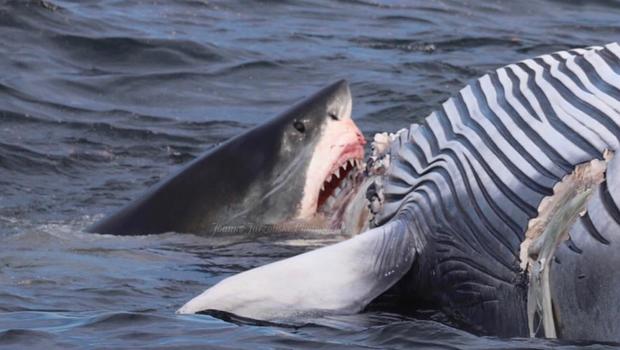 Passengers and crew aboard a whale-watching boat were "in complete awe" when they saw at least two great sharks foraging a dead whale in Cape Cod Bay over the weekend, said a marine biologist who photographed the wildlife encounter.

Joanne Jarzobski, a marine biologist for Hyannis Whale Watcher Cruises, said about 160 passengers were on the boat Sunday when it came across a dead finback whale about seven miles north of Barnstable Harbor. "We had received a report in the morning that this whale was floating in the bay and we were asked to try to document it on our way out on our whale watch," she said in a Facebook message.

She said one of at least two great white sharks "scavenging on the dead whale" was estimated to be 18 feet or longer. "She was huge!" Jarzobski said.

Jarzobski took pictures, which she said show the whale belly-up. She said the black-and-white stripes seen in the photo are throat grooves.

"Sharks have gained a notoriously bad reputation yet sharks are a very good sign of a healthy ecosystem," Jarzobski said,

She said she has been working on private and commercial whale-watching boats for 22 years in New England. "Getting the opportunity to see a great white shark in action is truly a once-in-a-lifetime experience for our passengers & crew," she said.

Sharks attacked two swimmers in the same region over the summer. One man was killed in Massachusetts' first fatal shark encounter in over eight decades. 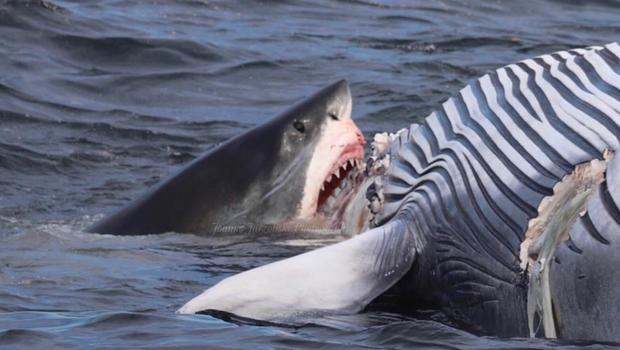 Beto O’Rourke weighs in on impeachment