A plane carrying first lady Melania Trump unexpectedly turned around shortly after taking off from Joint Base Andrews in Maryland on Wednesday morning. The plane landed safely at the military base, and the first lady was seen getting off of the plane, according to a press pool report.

Trump's spokeswoman, Stephanie Grisham, told reporters there was a "minor mechanical issue" and that "everything is fine and everyone is safe." Trump was heading to Philadelphia to meet with families of children who were affected by exposure to opioids while in the womb.

Reporters were told that the trip was still on. The commotion started about 10 minutes after takeoff when some Secret Service officers were seen heading toward the front of the plane.

Shortly after, a thin haze of smoke was visible and there was a smell of something burning in the cabin. The smoke cleared and the smell dissipated within minutes. 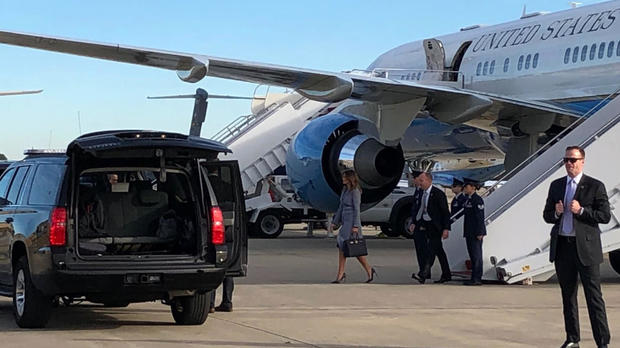 Meghan McCain says “America was always great” in tribute to her...