Nicole Kidman might be known as one of the most glamorous women in Hollywood, but the actress looks nearly unrecognizable in her new turn as LAPD detective Erin Bell in upcoming crime thriller "Destroyer." It's not the first time Kidman has altered her appearance for a film; in 2002, she donned a prosthetic nose for her Oscar-winning role as Virginia Woolf in "The Hours."

"Destroyer," helmed by director Karyn Kusama, is about a veteran detective who goes on a journey to find gang leader and murderer Silas, played by Toby Kebbell. The film, written by Phil Hay and Matt Manfredi, reunites Kidman's character with people from her past: a criminal gang she once joined when she was an undercover FBI agent. According to distributor Annapurna's description of the film, the undercover assignment "ended disastrously and has taken a heavy psychological and physical toll on her life."

Erin Bell tracks down Silas' associates and grapples with memories of her undercover days, including ones of a tragic bank heist gone wrong. Meanwhile, she also deals with her troubled relationship with her estranged 16-year-old daughter, Shelby.

"Destroyer" hits theaters on Dec. 25. Watch the new trailer below. 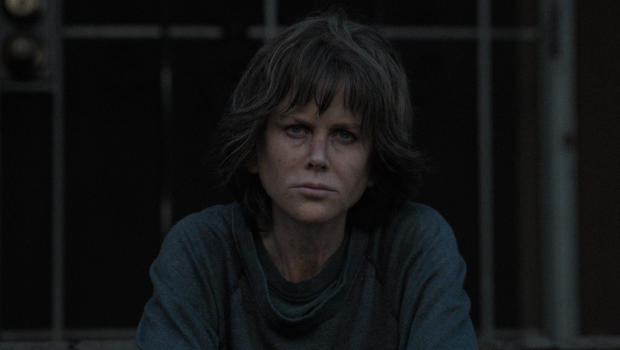