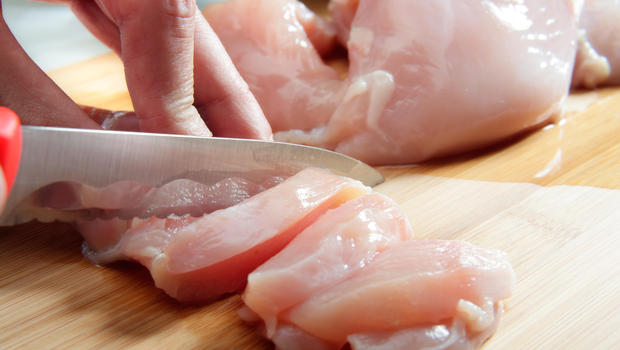 Ninety-two people from 29 states have been sickened in a Salmonella outbreak linked to raw chicken, the Centers for Disease Control and Prevention reports. Twenty-one people were sick enough that they had to be hospitalized. No deaths have been reported.

The CDC has not identified a common source of contaminated chicken. Rather, it says there's evidence that many types of raw chicken products from a variety of sources contain the strain known as Salmonella Infantis that is making people ill.

Testing revealed that the Salmonella strain involved in the outbreak is resistant to many types of antibiotics.

Investigators have identified the outbreak strain in raw chicken pet food, raw chicken products, and live chickens, indicating it might be widespread in the chicken industry.

The CDC says consumers do not need to avoid eating properly cooked chicken, and it its not advising retailers to stop selling raw chicken products.

How to protect yourself and your family from Salmonella

Health officials say the outbreak should serve as a reminder to always cook raw chicken carefully and thoroughly, as it may contain germs can that spread around food prep areas and make people sick.

The USDA Food Safety and Inspection Service advises that all raw chicken products, including chicken breasts, whole chickens, and ground poultry such as chicken burgers and chicken sausage, should always be cooked to an internal temperature of 165°F to kill harmful germs. Leftovers should also be cooked to 165°F.

Health experts do not recommend washing raw poultry or meat, as bacteria in poultry and meat juices can spread to other foods, utensils, and surfaces.

To prevent cross-contamination, thoroughly wash hands, counters, cutting boards, and utensils with warm, soapy water after they touch raw chicken. If possible, use a separate cutting board for raw chicken and other raw meats.

Additionally, the CDC does not recommend raw diets for pets, as this can make animals, as well as people handling the raw food, sick.

Finally, to prevent the spread of germs, wash your hands frequently, especially before and after preparing or eating food, after contact with animals, and after using the restroom or changing diapers. 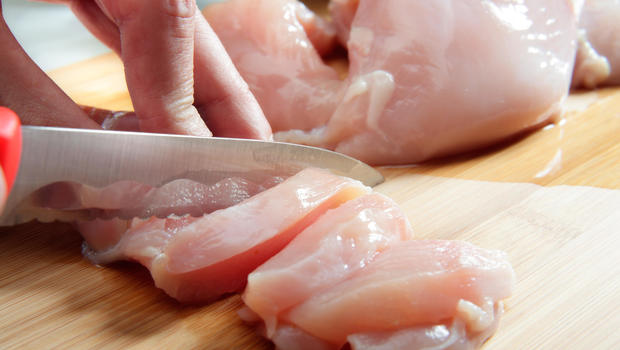