Most Catholic Americans think the Pope and the Vatican are doing a poor job handling recent reports of child sexual abuse by priests, and about a quarter of Catholics say those reports have made them question whether they should remain in the Church. Favorable views of Pope Francis have dropped sharply among Catholics in the last two years.

Seven in 10 Catholic Americans think that child sex abuse by priests is a very serious problem, and just 29 percent of think the Pope and the Vatican are doing a good job handling the matter, a marked decline from just before his first visit to the U.S. three years ago. Back in 2015, nearly half of Catholics said he and the Vatican were doing a good job handling this issue.

As a result of the reports of past sexual abuse of children by priests, more Catholics are now questioning their participation in the Catholic Church. Now a quarter of Catholics say the abuse reports have made them personally question whether they would remain in the Church. Just 9 percent said this in 2010 amid reports that had surfaced back then.

Twenty-two percent of Catholics say they are now less likely to attend mass because of the reports of child sexual abuse. Today 38 percent of Catholics say they attend mass at least once a week, similar to what was reported in 2015 (34 percent), but a smaller percentage than the 45 percent who reported doing so when Pope Benedict XVI stepped down in 2013.

Catholics who attend mass tend to be older. Just one in four Catholics under the age of 45 attend mass at least once a week, compared to nearly half of Catholics age 45 and older.

Two-thirds of Catholics have at least some confidence that the Vatican can prevent future cases of child sex abuse by priests, although only a quarter have a lot of confidence. Catholics who attend mass regularly tend to have more confidence in the Vatican.

Just 43 percent of Catholic Americans think the Catholic Church is in touch with the needs of Catholics today; 51 percent think the Church is out of touch. These percentages have been fairly consistent over the past thirty years, though they represent a change from three years ago. In September 2015 – right before Pope Francis' first visit to the United States – most Catholic Americans said that the Church was in touch with the needs of Catholics.

Specifically, most Catholic Americans of all ages approve of letting Catholic priests get married (68 percent) and allowing women to be ordained as priests (64 percent) – positions that have been popular for many years. Even those who attend mass regularly favor allowing priests to marry, though they are a little less enthusiastic about allowing women to become priests.

Two in three Catholic Americans think celibacy plays at least some part in contributing to child sexual abuse by priests (though just a third say it is a major factor). Those who advocate allowing priests to marry and allowing women to become priests are particularly likely to think it plays a role.

Pope Francis continues to be viewed more positively than negatively by Catholic Americans, but favorable opinions have dropped from 63 percent in 2016 to 48 percent today.

This poll was conducted by telephone September 29-October 2, 2018 among a random sample of 1,103 adults nationwide. Data collection was conducted on behalf of CBS News by SSRS of Media, PA. Phone numbers were dialed from samples of both standard land-line and cell phones. 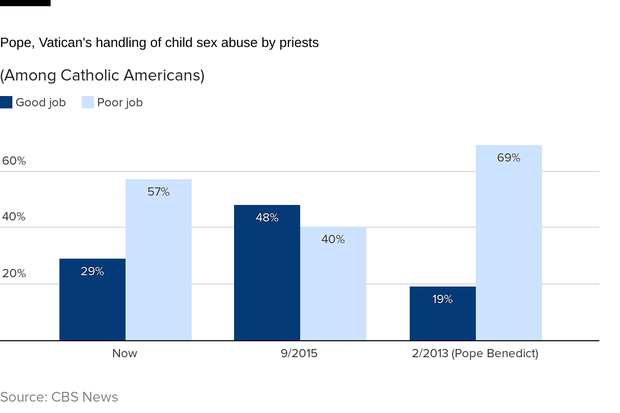 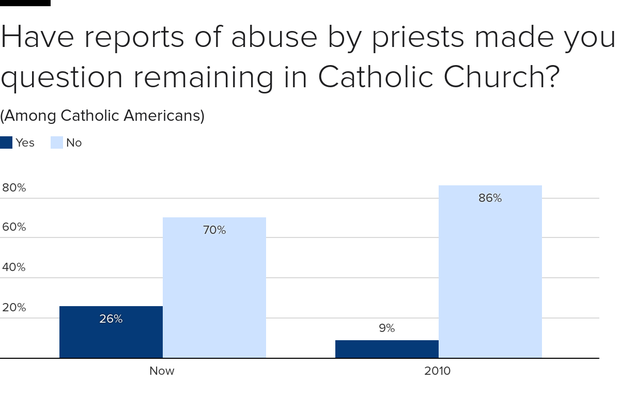 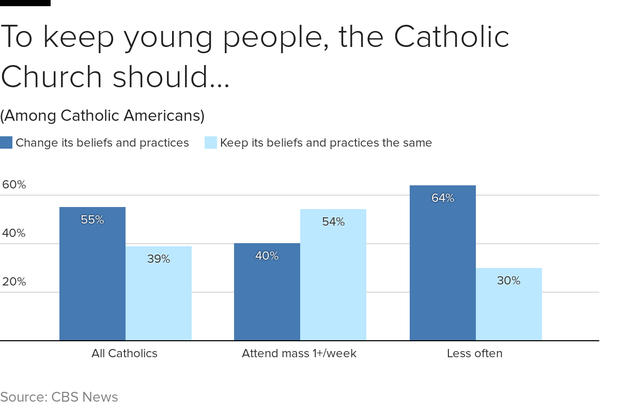 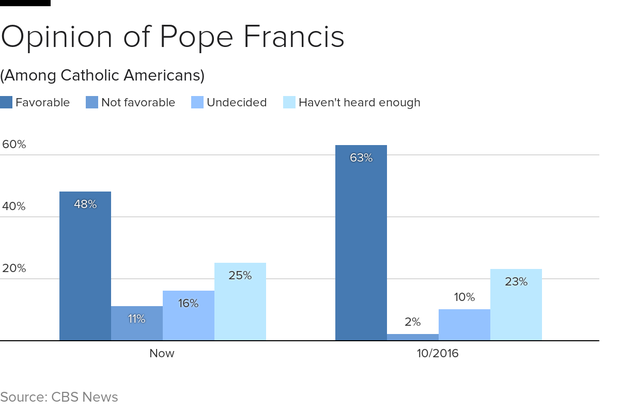 Everything to know about the first Democratic debate