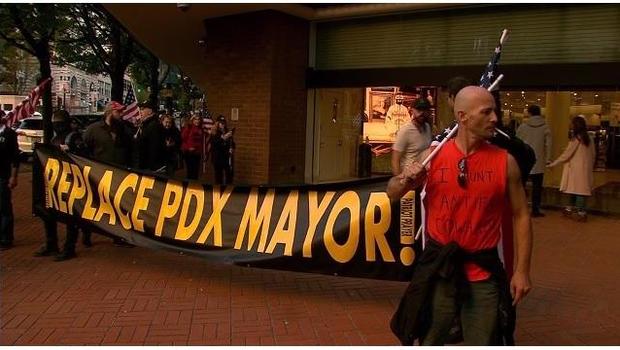 By Caroline Linton CBS News October 16, 2018, 12:07 AM Portland could put restrictions on protests if groups have history of violence, mayor says

Portland's mayor proposed Monday restrictions on protests from groups that have a history of violence. His comments came after violent clashes on Saturday during a demonstration that included the antifa and far-right groups Patriot Prayer and Proud Boys.

Wheeler said Patriot Prayer protesters were arrested on a rooftop with weapons and ammunition during an Aug. 4 demonstration. On that day, a giant crowd of people from several opposing political groups, including Patriot Prayer, Proud Boys and antifa, faced off in a protest that started at a downtown park, KOIN reports.

Officers initally seized the protesters' weapons and ammunition, but they were later given back. No arrests were made because all the protesters had concealed carry licenses.

The regulations Wheeler proposed Monday would issue "reasonable time, place and manner restrictions." The proposal would give the police commissioner greater tools to keep the peace and protesters separate, the city attorney said.

Wheeler said he hopes to have the ordinance ready for the City Council by Wednesday, Oregonian / OregonLive reports.

But the American Civil Liberties Union tweeted Monday it had "serious concerns" about the proposed regulations.

Wheeler said "the objective is to reduce street brawls and violence" and it "it gives us more tools to deal with the protests."

The organizer of Saturday's demonstration, Patriot Prayer leader Joey Gibson, told KOIN the march was a reaction to Wheeler's response to an Oct. 7 protest about the fatal shooting of Patrick Kimmons. During the Oct. 7 demonstration over Kimmons' death, a car drove through the crowd and was damaged by protesters blocking his path and hitting the car. Police did not make any arrests but have said they were monitoring the situation.

Four people were treated for injuries during Saturday's demonstration. Riot police broke up the brawl, but police said no arrests were made.

Meanwhile, New York City police are pursuing riot or attempted assault charges of nine members of Proud Boys after a melee Friday night outside a Manhattan Republican club following an appearance by the group's founder, Gavin McInnes. The NYPD said it is also pursuing charges against three anti-fascist protesters. 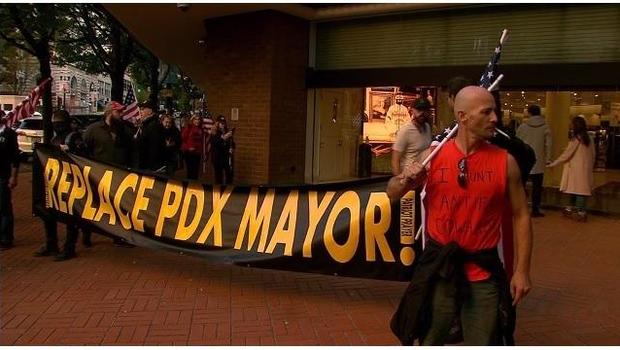