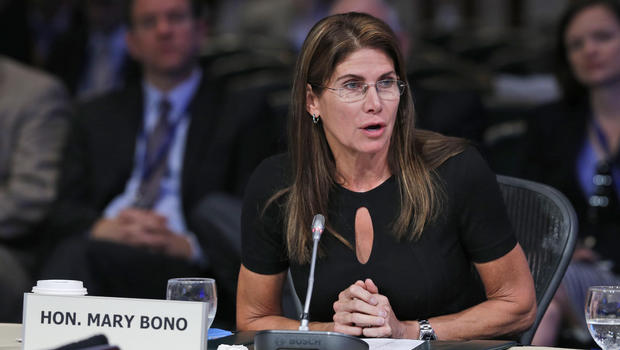 USA Gymnastics has accepted the resignation of interim president Mary Bono, who was on the job for just five days. The move comes after top gymnasts criticized her connection to a law firm accused of covering up abuse by former Olympics doctor Larry Nassar and for an anti-Nike tweet she sent after unsigned NFL quarterback Colin Kaepernick was enlisted in the company's ad campaign.

"We believe this is in the best interest of the organization," the USA Gymnastics board of directors said in a statement. "We, as a Board, are committed to taking action when we believe a change of course is necessary and to being responsive to our gymnastics community."

In her own statement, Bono said she submitted her resignation with "profound regret."

"My withdrawal comes in the wake of personal attacks that, left undefended, would have made my leading USAG a liability for the organization," Bono said.

Bono said she firmly stands behind her work at the law firm Faegre Baker Daniels, which represented USA Gymnastics when accusations against Nassar began to arise. The Indianapolis Star reported an attorney from the firm worked with Nassar to concoct excuses for missing USA Gymnastics events before allegations of his abuse became public. Gymnast Aly Raisman criticized Bono's connection to the firm on Monday.

Bono's statement also addressed the anti-Nike controversy. Last month, Bono tweeted a photo showing her use a marker to black out the Nike logo on her golf shoes.

"With respect to Mr. Kaepernick, he nationally exercised his first amendment right to kneel. I exercised mine: to mark over on my own golf shoes, the logo of the company sponsoring him for 'believing in something even if it means sacrificing everything' — while at a tournament for families who have lost a member of the armed services (including my brother-in-law, a Navy SEAL) who literally 'sacrificed everything,'" she said in her statement.

Simone Biles, one of USA Gymnastics most prominent stars, criticized Bono on Twitter for the tweet, writing: "don't worry, it's not like we needed a smarter usa gymnastics president or any sponsors or anything." 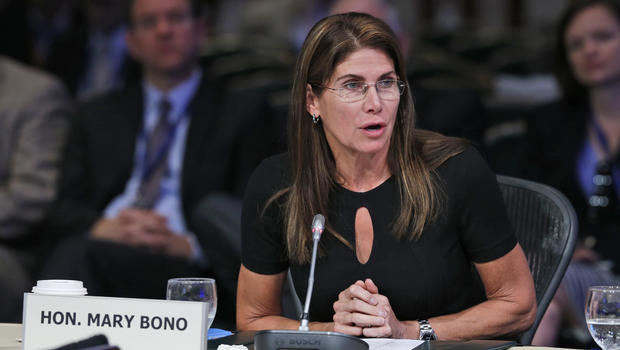 Why I'm proud to protest