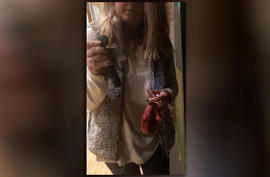 A white St. Louis woman was fired from her job Sunday after she tried to prevent a black man from entering the luxury apartment building where he lives. D'Arreion Toles said he was returning home from work when the unidentified tenant physically blocked him from entering the building at the Elder Shirt Lofts in the city's downtown.

Tribeca Luxury Apartments in St. Louis said it was "disturbed" by the interaction in the video and confirmed the woman in the video was an employee, CBS affiliate KMOV-TV reports. After reviewing the incident, the company said the woman was terminated from her position. It noted that the incident did not happen at one of its properties.

Toles recorded the incident on his cellphone and posted footage of the incident on Facebook. The video has more than 4 million views and has been shared over 113,000 times. The videos show the woman demanding proof that Toles lives in the apartment building. She can be seen standing in front of the entrance, refusing to let him in.

Toles eventually pushes past the woman, who follows him to his apartment door. He said police arrived at his apartment about 30 minutes after he entered his apartment, but they left without giving anyone a citation.

"I was kind of blown away, shocked and like wow," he told KMOV. "I am just glad I had my camera out. If I did not have my camera out, I feel it could have gone a totally different way."

Toles said that he isn't upset with the woman and isn't going to take legal action against her. "I am not mad at her. I am not upset with her. I am not going to go after her legally or anything like that. I wish her the best," he said. "I would still have a conversation with her." 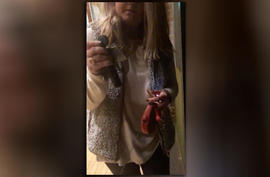