As political discord appears to grow every day on Capitol Hill, Republican Senator Ben Sasse told "CBS This Morning" that the country is headed toward a "deeper, darker tribal place." Sasse, author of the new book "Them: Why We Hate Each Other – and How to Heal" (Macmillan) argues that politics is merely "filling a void" in Americans' lives amid a "hallowing out" of their sense of community.

"I think politics are important but they're not the first thing, they're certainly not the only thing, and I think right now our politics are suffering because people are looking to find grand meaning there because we're not reflecting well on these core underminers of happiness at home," said Sasse.

He added, "We don't listen all that well in Washington. I'm one of eight people out of 100 in the Senate who's never been a politician before, so I'm new to this place, but politicians talk more than we listen. We should listen more than we talk."

Sasse's comments come after a new CBS News Battleground Tracker poll shows that 84 percent of registered voters surveyed say that the overall tone and civility in politics are getting much worse.

"I'd say the Civil War was really bad, but since then, this is pretty terrible," he said.

Along with the rise of an angrier rhetoric in Washington, Sasse writes in his new book that cultural divisions are leaving the nation less happy, with a "crippling" sense of loneliness unlike previous generations.

Sasse argued that the Senate in particular is subject to the growing trend of divisiveness, claiming that it's being "swallowed whole" by a 24/7 cable news mentality.

"Pretty much everybody in Washington, but maybe the politicians at the top in Washington are particularly good at trying to just demonize," said Sasse.

He added, "You don't want to find good and evil in politics, and too many people in the cable news tribes and in political parties think that anti-tribes are enough to sustain them. I think most Americans differ." 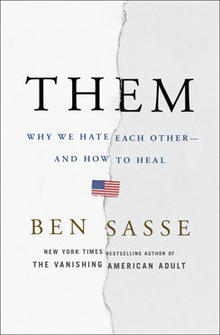