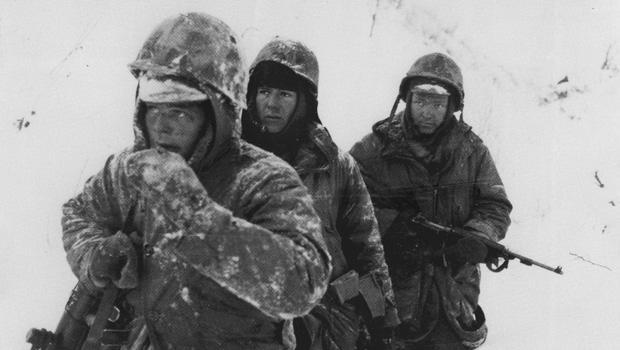 You may have seen the pictures before: American fighting men pushed to their limits and beyond. But unless you were at the Chosin Reservoir in North Korea in the brutal winter of 1950, you have no idea.

"Survival is probably the strongest of our instincts, and we all just did what we had to do to survive," said Warren Weidhahn, now 90, who was a young Marine at Chosin Reservoir. "People can't imagine 40, 50 below zero. Everything froze. Vehicles froze, rifles froze, people froze. If you got wounded, you couldn't walk, you froze to death."

It was Thanksgiving, and the legendary Gen. Douglas MacArthur had turned the tide of battle. North Korean troops who had invaded the South were in full retreat, and MacArthur's forces were in hot pursuit, pushing toward the Yalu River and the border with China.

"When we went into the mountains toward the Yalu, MacArthur had said that he would have the Marines home by Christmas," Weidhahn said.

"And you believed it?" asked national security correspondent David Martin.

In his new book, "On Desperate Ground" (Doubleday), author Hampton Sides calls Chosin Reservoir "the Korean War's greatest battle." He told Martin that Gen. MacArthur wanted to cap off his military career with a great victory by uniting all of Korea.

Sides said the battle at Chosin Reservoir asks the question: "How much can a human being endure?"

Martin said, "It's a human endurance story that begins with human folly?"

MacArthur ignored intelligence reports that tens of thousands of Chinese troops had infiltrated into North Korea and were laying in wait for the Americans.

"The Chinese were so good at this, traveling only at night," said Sides. "They would literally strap themselves to trees and nap during the day so that they couldn't be seen."

The Marines were moving north along a single road that twisted higher into the mountains up to the Chosin Reservoir, which was supposed to be just a way station on their way to the Yalu.

Sides said, "This was kind of a perfect trap because they had to go singe file up this very narrow road. Any commander knows this is a terrible way to move because you get strung out."

The Chinese sprang the trap on the night of November 27.

Weidhahn said, "We heard bugles and whistles, and the Chinese came pouring over the mountain in front of us – thousands firing and shooting, coming down the valley towards us. Every weapon we had was firing at the Chinese. Nothing stopped them. They just kept coming.

"They overwhelmed the weapons that we had, and pretty soon we ran out of ammunition."

The Marines had air cover, so during the day the Chinese would retreat back into the hills to avoid the bombs. But as soon as night came, the Chinese started their attack all over again.

"Their job was to annihilate us," said Weidhahn. "Every night, as soon as it got dark, they attacked, and en masse right into the lines – hand-to-hand fighting."

"Boy, that must have been a feeling of dread when the sun's going down," Martin said.

"Oh, yeah, we knew they were coming."

Sides said, "They have to begin to think about a word that the Marines do not like, which is the word 'withdrawal,' or 'retreat.'"

When Gen. Smith was asked if he was retreating, his reply was, "Retreat? Hell, we're just advancing in another direction."

"Whatever you call it, they were yielding the field to the enemy," Martin said.

"But the point was to quit the field with honor," said Sides. "I think that's why the Marines to this day view the Chosin Reservoir as one of the great battles in their history, because they had been put into an impossible position, and they had to extricate themselves from this trap."

The Marines retraced their route to the sea along that single winding road, with Chinese shooting down on them. They carried their casualties with them, but as the number of wounded continued to pile up, they had to make room on the trucks by burying the dead.

The Chairman of the Joint Chiefs of Staff, Gen. Joseph Dunford, keeps a picture of one of those Marines on his office wall: his father, who was a Private First Class and already a combat veteran by the time his unit reached Chosin Reservoir. "He turned 20 the night of 27 November, 1950," said Gen. Dunford.

Along with the rest of the Marines, Dunford's father held on through five nights of Chinese human wave attacks, and then made the bitter march out. Gen. Dunford said, "He did suffer a pretty severe case of gangrene and frostbite."

Martin said, "Now you've got these pictures sort of watching you as you do your job over there."

"Deliberately so. My dad's picture, particularly because it's so personal, kind of reminds me of the responsibility we have to the young men and women that are out there."

It's been 68 years since the Battle of Chosin Reservoir, and it, like Gen. Dunford's father, still lives. He said, "There is something spiritual about the Chosin Reservoir."

"'Spiritual' – that's not a word I would associate with a battle," Martin said.

"I think that's what it's become," Gen. Dunford said. "It's a battle that kind of characterizes what Marines have been through history, and what they ought to be in the future."

A battle in which the Marines suffered 1,000 dead and wounded – a battle that drove American forces out of North Korea.

When asked if he believed the sacrifices made by Americans matter, Gen. Dunford replied, "I can tell you what my father thinks; the sacrifices that he and his fellow Marines made were worth it."


READ AN EXCERPT: "On Desperate Ground" 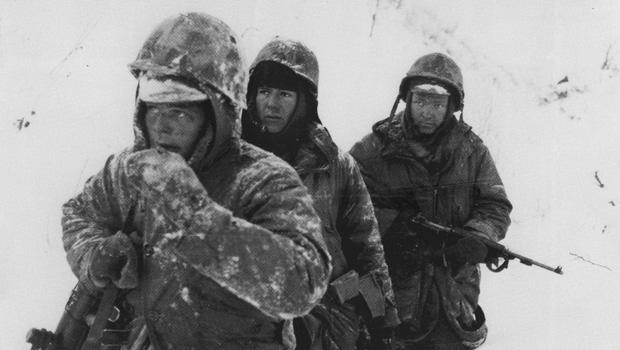 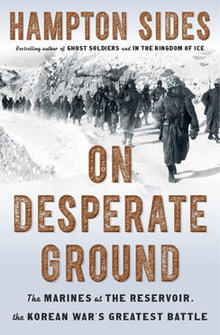 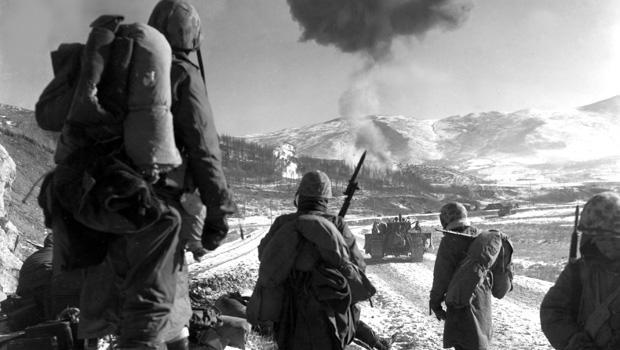 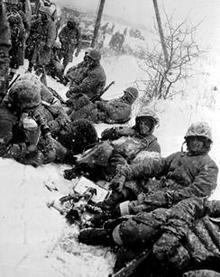