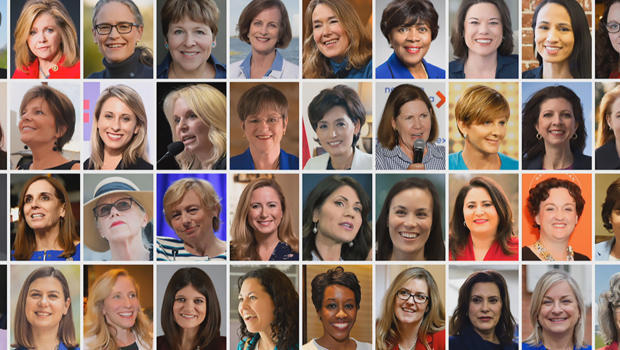 Kelly Dittmar, a political science professor at the Center for American Women and Politics at Rutgers University in New Jersey, has been tracking what in some ways is a standout year for female political candidates. "You would think that women are sort of taking over American politics; all of the stories are about women running," she said. "The attention is to the surge or the tsunami or the pink wave. And so, all of the rhetoric makes it appear as if women are going to be well-represented."

In all, more than 500 women announced runs for Congress and governorships in 2018 – a record number of women running for office.

It sounds impressive, but this record year looks a little different when you take the longer view. Since the first Congress in 1789, fewer than three percent of America's national political leaders have been women. And the pace of change has been slow. Jeannette Rankin from Montana became the first woman to join the House in 1917.

It took until 1992, the so-called "Year of the Woman," to get to 10 percent representation.

Dittmar told correspondent Tony Dokoupil, "It should be seen as a problem, by any citizen in this country, that over 50% of the population is only holding 20% of seats in its major policymaking body."

A desire to change those numbers is a major reason why many women are running. But it's not the only reason.

In a new afterword to her memoir, "What Happened" (published by Simon & Schuster, a division of CBS), Hillary Clinton says she believes that, in addition to Russian election meddling, and the investigation into her e-mails, sexism also helps explain her loss.

A two-time presidential candidate, perhaps no one knows more than she does about what it's like to campaign as a woman.

Dokoupil asked her, "You mention a file on sexism in politics. Do you really have a file?"

"I do," she replied. "It's a file that tells a somewhat sobering story about how hard it is to break through the mindsets that people have. And it is difficult for many people – and not just men, a lot of women – to think, 'Wait a minute, this woman is going to be a governor, or a member of Congress, or my mayor, or maybe even a president.'

"If you watched the way Trump debated me, it was just imbued with sexism – making fun of me for preparing? Well, you know, that's the old, like, 'Oh, yeah, the girl in the class who's always prepared. I don't need to be prepared!'"

But this year the expectations, and the perception for female candidates, may be changing, as women (including military veterans) can be seen campaigning as powerful leaders without downplaying their gender.

Jahana Hayes is a candidate for the House in Connecticut. In 2016 ago she was "Teacher of the Year." Now she's one of many women running as first-time candidates.

"Courage is contagious," Hayes said. "I can tell you I would have never imagined running for any elected office two years ago.

"People should not vote for anyone because of one singular thing. But I think the fact that I am a woman, that so many women are running, adds some perspective to the conversation. … We cannot have a Congress that speaks on behalf of women and LGBTQ community, transgenders, when those people are not represented in that Congress."

Hayes is a Democrat, as are about three-quarters of the women running for seats in the House. And perhaps here's why: 92% of Democrats think it's important that women are elected to political office; only 50% of Republicans feel the same way.

But that hasn't stopped Republicans like Kimberlin Brown Pelzer. "Women tend to sit back and watch things happen from a political standpoint," she said, "and I'll tell you the last three years they've become more vocal than any time I can personally remember in history."

Brown Pelzer, a former soap opera star who came to national attention with a speech at the 2016 Republican convention, is a House candidate in California who says that putting more women in office is a bipartisan goal.

"I think women still don't believe that they have that opportunity; they still are afraid of stepping through that good old boys' club door," Brown Pelzer said.

And many, including Hillary Clinton, believe the recent, bitter hearings for Judge Brett Kavanaugh showed sexism is still front-and-center in American politics.

"Look at the display we saw of Republican men in the confirmation hearings, where they're yelling and screaming, to a witness who's yelling and screaming," Clinton said. "And you saw two distinguished women senators, Dianne Feinstein, one of the deans of the Senate, Amy Klobuchar, a former prosecutor – and the witness, a federal judge, is baiting them? Questioning them? He didn't do that to the men."

The Kavanaugh hearing also turned attention back to the #MeToo movement, which complicates Clinton's place in women's history. In the 1990s she stood by her husband, President Bill Clinton, as he denied allegations of sexual harassment and assault.

Dokoupil asked, "What role, if any, did you play in criticizing the character of the women who have accused Bill of sexual misconduct?"

"No role. I take responsibility for my life and my actions."

She also stood by his side as he was impeached after lying about his affair with a White House intern. Some today have said he should have stepped down.

"In retrospect," Dokoupil asked, "do you think Bill should've resigned in the wake of the Monica Lewinsky scandal?"

"It wasn't an abuse of power?"

"There are people who look at the incidents of the '90s and they say, 'A President of the United States cannot have a consensual relationship with an intern. The power imbalance is too great.'"

"… who was an adult," Hillary said. "But let me ask you this: Where's the investigation of the current incumbent, against whom numerous allegations have been made, and which he dismisses, denies, and ridicules?

"So, there was an investigation [of President Clinton], and it, as I believe, came out in the right place."

That "incumbent" may well be one of the reasons so many woman are running for office in 2018. Still, even by the most generous projections, when all the votes are counted, Congress will still be at least 75 percent men.

But consider this: One of the women running for office today for the first time, in the decades ahead, could become the first female president.

Hillary Clinton laughed. "Well, I hope we get there sooner! I really do. But you're right. And maybe could be the second, third, fourth female president. How about that?" 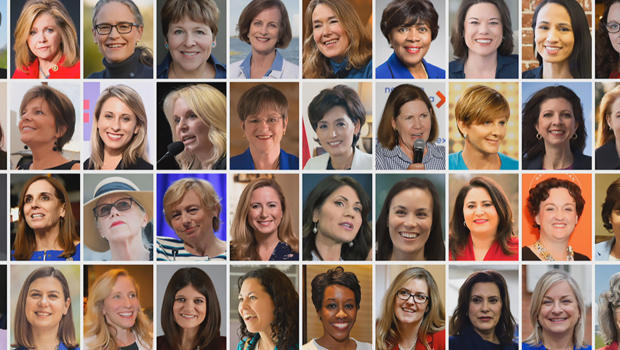 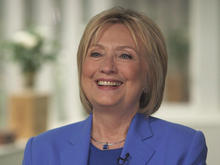 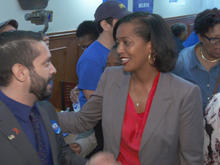 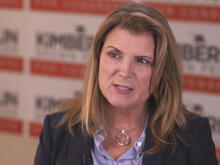