With less than a month to go before Election Day, a growing number of Republican and Democratic voters in key battleground districts say they would be angry at the prospect of the other side winning.

And anger is related to turnout: those who say they'd be angry are also more likely to say they'll show up.

It's a picture of a midterm that looks increasingly rancorous and even personal. Overwhelming majorities in each party say civility in politics is getting worse.

More Republicans say they're very enthusiastic now (62 percent) compared to last month (51 percent), but six in 10 Democrats are also very enthusiastic, so now enthusiasm between the parties is matched. But intention to turn out also remains even, as it has been: about eight in 10 Democratic and Republican voters say they'll definitely vote in November. This is a slight increase for both parties since last month.

Partisans are also digging in on their vote choices: About nine in 10 plan to vote for their own party's candidate for the House, and fewer compared to last month now say they would consider switching their vote to the opposing party.

Overall, more voters in these battleground districts are becoming engaged in the campaign: more are paying attention and there's been an uptick in voter enthusiasm since September.

Brett Kavanaugh's confirmation to the Supreme Court has sharply divided voters in these battleground districts. Partisans express strong feelings about it: 60 percent of Democrats are angry about the confirmation (far more than are just dissatisfied), and 56 percent of Republicans are enthusiastic (a higher percentage than those who are only satisfied).

Voters who have these more intense feelings about the confirmation– either angry or enthusiastic – are far more likely to say they'll definitely vote this year (about 9 in 10 in each group) compared to those who have more moderate views – either just satisfied or dissatisfied.

While these groups are equally as likely to say they'll definitely vote, voters who are enthusiastic about the Kavanaugh confirmation (who are overwhelmingly Republican) are more likely (80 percent) than those who are angry about it (69 percent) to be very enthusiastic about casting a ballot.

There is a gender split on Kavanaugh's confirmation: most men view it positively, while most women negatively. These opinions are largely driven by partisanship, as Democratic men and Democratic women hold similar, negative, views. Republican women feel positive about the Kavanaugh confirmation. Fifty-two percent are enthusiastic about it, although that's lower than the 61 percent of Republican men who feel that way.

Democrats maintain an edge in the battle for control of the House of Representatives. Democrats are being helped by a gender gap in the race for the House in these key districts: Men are backing Republican candidates by 7 percentage points, while women are supporting Democrats by 12 points. The gender gap has widened somewhat since last month.

Donald Trump won the reported votes of white women in these districts, but white women are now split in their House vote between Democrats and Republicans. Most white women feel positively about the economy, but more than half are dissatisfied about the way things are going in the country. White men are backing Republicans by double-digits as they did Donald Trump two years ago.

Democrats currently lead Republicans by wide margins among African Americans (84 to 8 percent), and young voters (57 percent to 28 percent) but the party needs these voters to turn out. Fewer black voters say they'll definitely vote than white voters, and voters ages 18-29 are least likely of any age group to say they'll definitely vote. Also, Democrats are partly relying on new voters – more than one in five of those backing Democrats did not vote in either the 2010 or 2014 midterm elections.

Black voters' strong support for Democrats is in part because these voters see the Democratic party working for them, and the Republican party against them. Most African American voters say the Democratic party works for their racial group, but just 10 percent say that about President Trump and the Republican party. Three in four say they work against their racial group.

Self-identified Democrats and many groups voting for Democrats this year feel more like they're losing, not winning, in American society today.

Republicans have a 6-point lead among white voters overall and are getting strong support from their base: Republicans, conservatives, and white evangelicals (72 percent to 21 percent). Seven in 10 white evangelicals say President Trump and the Republican Party are working for people of their faith; a similar majority feels the Democratic party is working against their faith and religion.

White evangelicals and conservatives are more inclined to feel people like them are winning these days, rather than losing.

For more than seven in 10 voters in these districts their vote will be about President Trump with somewhat more expressing opposition to him (38 percent) than support (35 percent).

Donald Trump's influence may not help those sitting on the fence, however. Independent voters and those who are unsure about their vote say they'd be less likely, not more likely, to vote for a candidate endorsed by President Trump.

The economy appears to be an advantage for Republicans. Voters who say it's very important plan to vote Republican for the House by double digits (53 percent to 39 percent). More voters think the economy will get better rather than worse if Republicans keep control of Congress.

Voters who say the Supreme Court is very important are split in their vote choices.

Most voters overall don't anticipate improvement on many issues facing the country like immigration health care, taxes, and gun policy if Democrats win control of Congress or if the Republicans keep it.

The CBS News 2018 Battleground Tracker is a panel study based on interviews conducted of registered voters in 61 competitive and likely competitive congressional districts in the United States. The poll was conducted by YouGov, an online polling company. This poll was fielded between October 9-12, 2018 with 4,831 respondents. The respondents were selected from YouGov's online panels to be representative of registered voters in these districts in terms of age, race, gender, and education. The sample was weighted according to gender, age, race, and education, based on the American Community Survey, conducted by the U.S. Bureau of the Census, as well as 2016 Presidential vote, and post-stratified on district type. The margin of error (a 95% confidence interval) is approximately 1.8%. 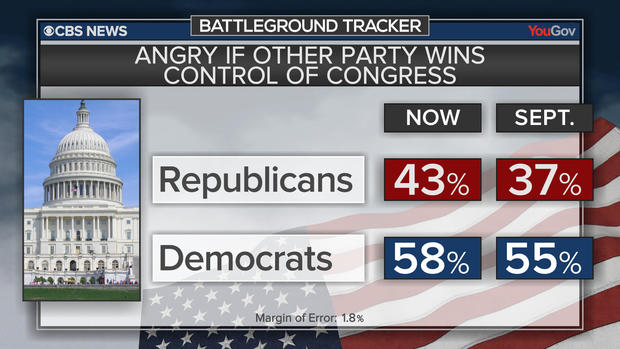 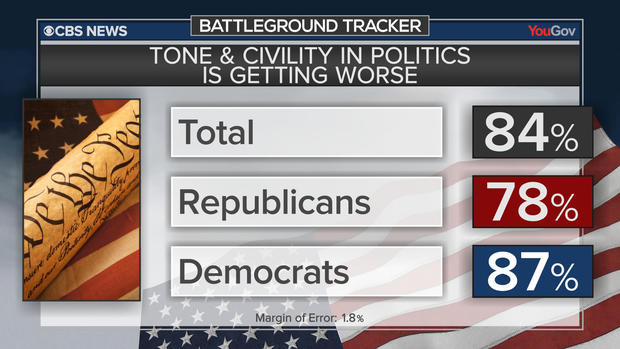 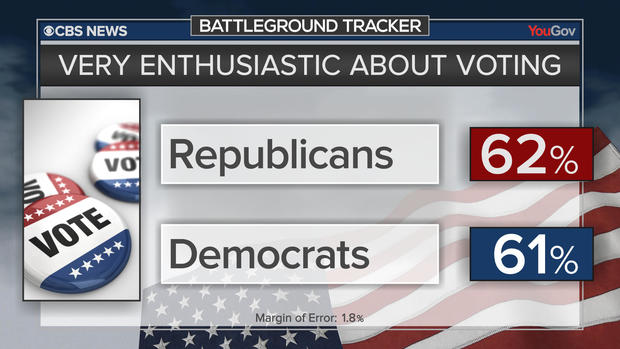 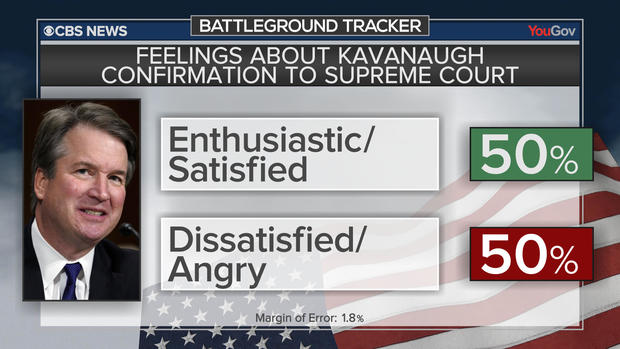 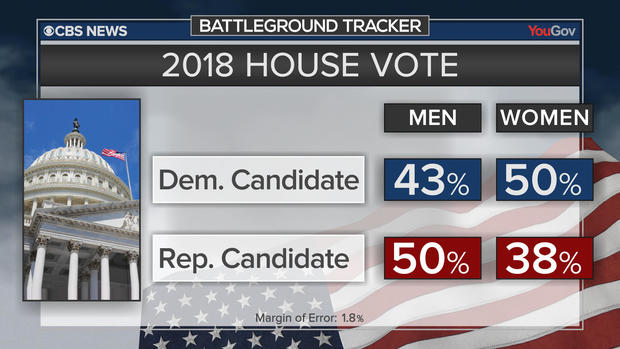 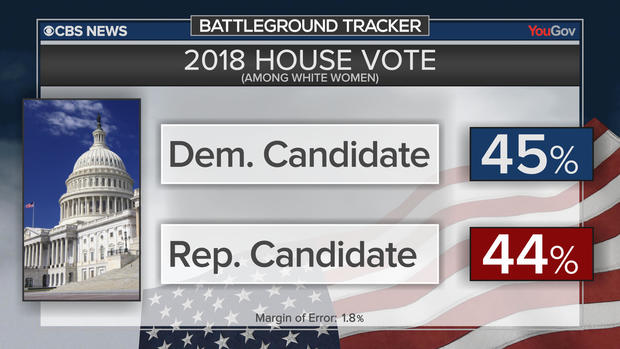 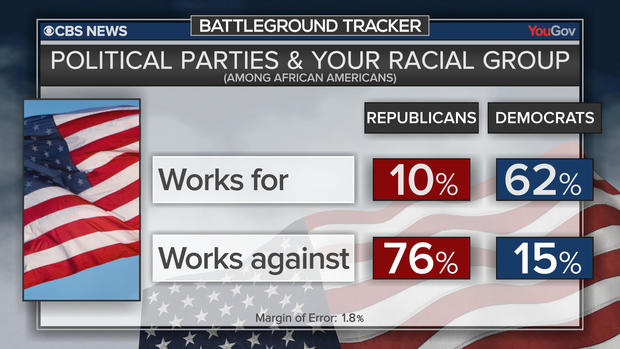 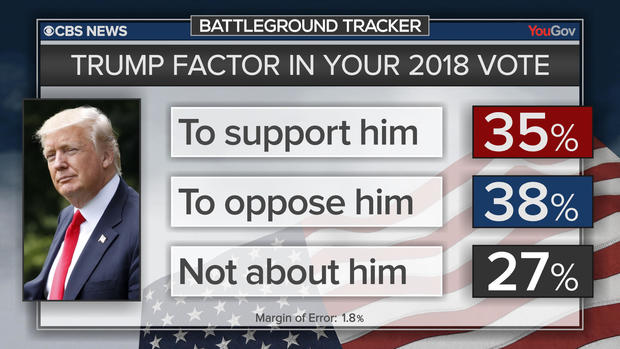 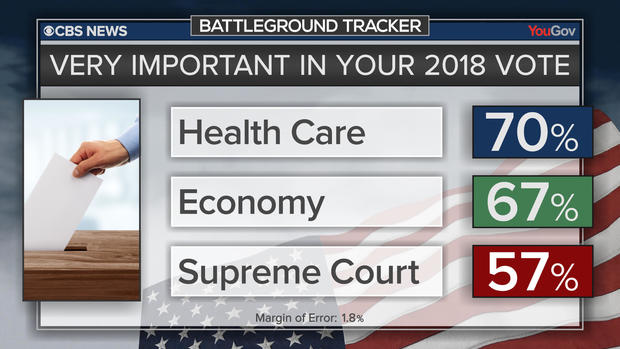