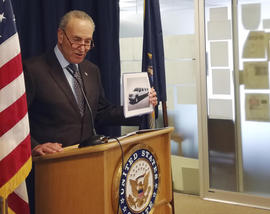 AMSTERDAM, N.Y. — The day after a mourning community said last goodbyes to eight of 20 victims of a limousine crash – four sisters and four other relatives – the Senate's top Democrat called on federal regulators to formulate new safety standards for the vehicles.

Sen. Chuck Schumer on Sunday pointed to glaring gaps in safety data and singled out the National Transportation Safety Board, which he said hasn't thoroughly investigated a limousine crash in three years.

His criticism comes a week after the stretch limo loaded with 18 people on their way to a birthday party for one of the occupants ran a stop sign and crashed at the bottom of a hill in the town of Schoharie. Everyone in the limo died, including the four sisters, along with two pedestrians.

"The sad fact here is that right now everyone is talking about limo safety when we could have been studying it for the past few years," Schumer said. "The NTSB knows they need to fix this situation so we can have as much information as possible available."

At a news conference, he called on the NTSB to investigate every stretch limo crash that has occurred in the U.S. and use the data to make recommendations for safety standards that would then have to be implemented by the National Highway Transportation Safety Administration.

The NTSB – charged by Congress to conduct independent probes and make safety recommendations – agreed to investigate limo crashes on a case-by-case basis after a 2015 wreck that killed four women on New York's Long Island.

But since then, Schumer said, multiple crashes should have been investigated and would have netted "critical safety data" about the structure and safety components of limousines. Federal crash data compiled by The Associated Press shows there were seven limo crashes in 2015 and two in 2016.

Eric Weiss, a spokesman for the NTSB, declined to comment.

In a 2015 letter, then-NTSB Chairman Christopher Hart said the board shared Schumer's concern that "relatively little information is available about how stretch limousines perform in a variety of crash scenarios."

"The question that is in the hearts of so many is: Why?" The Rev. O. Robert DeMartinis told mourners. "Why did these 20 individuals have to be taken from us so quickly and so unexpectedly?"

DeMartinis officiated in June at the wedding of Amy and Axel Steenburg. It was Amy's birthday that was being celebrated at the time of the crash.

He recalled them as a laughter-loving couple who made a sign asking wedding guests not to take pictures because "we suggest that you live in the moment."

Holding the sign aloft, DeMartinis said: "That's what they're asking me to ask you to do today."

While authorities continue to investigate the cause that wreck, New York prosecutors have charged the operator of the limousine company, Nauman Hussain, with criminally negligent homicide, saying he allowed an improperly licensed driver to operate an "unserviceable" vehicle. Hussain has pleaded not guilty and has declined to comment on the crash.

The limo driver in the crash, Scott Lisinicchia was reportedly stopped in August for not having a proper license to drive the limo. But Lisinicchia's widow told "CBS This Morning" her husband was a careful driver.

"He trusted in what the limo company said, that the cars were alright … there were a few times where he told me … 'I'm not going to drive this like this, you need to give me another car.' He cared about who he drove." 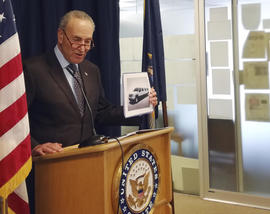 Bruce Reinhart unsealed: The magistrate at the center of DOJ's Trump...