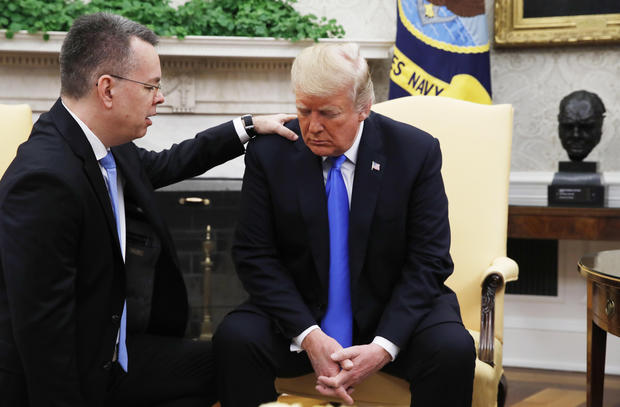 American pastor Andrew Brunson met with President Trump at the White House on Saturday, the day after he was released from Turkish custody. "From a Turkish prison to the White House in one day," Mr. Trump said as he sat next to Brunson in the Oval Office.

Mr. Trump thanked Turkish President Recep Tayyip Erdogan for Brunson's release, saying that it "wasn't easy" for the Turkish president. He also touted the number of prisoners held internationally that had been set free while he was president. "Chairman Kim was really great to us," with regard to releasing prisoners, Mr. Trump said.

"You really galvanized this country," Mr. Trump said. "Right now, the whole world is a fan of yours."

Brunson thanked the administration for the efforts to get him released. He also said that he loved the "Turkish people." Brunson then offered to pray with Mr. Trump, who responded that "I need it probably more than anybody else in this room."

Brunson kneeled and placed his hand on the shoulder of the president and prayed with him. After the prayer, Mr. Trump asked Brunson who he voted for in 2016.

"I sent in an absentee ballot from prison," Brunson said.

Brunson's wife and children also thanked the president and his administration working towards his release.

Speaking to reporters after Brunson spoke, Mr. Trump discussed the disappearance of Saudi journalist Jamal Khashoggi, who the Turkish government alleges was killed in the Saudi consulate in Istanbul under the orders of the Saudi government. He reiterated that if the Saudis were responsible, he would not cancel a $110 billion arms deal with the Saudis. "There are other things we can do that are very severe," Mr. Trump said.

Tony Perkins, president of the Family Research Council, first tweeted about Brunson's arrival in the United States. Perkins said Saturday he landed at a military base outside Washington with Brunson and Brunson's wife, Norine.

"They are thankful to be safely home in the USA. Under this administration being an American means something!" Perkins wrote on Twitter.

Earlier Saturday, Mr. Trump tweeted about Brunson's release. He praised Brunson and said no deal was made with Turkey to secure his freedom.

"Pastor Andrew Brunson, released by Turkey, will be with me in the Oval Office at 2:30 P.M. (this afternoon)," Mr. Trump tweeted Saturday morning. "It will be wonderful to see and meet him. He is a great Christian who has been through such a tough experience."

Mr. Trump said in a second tweet, "I don't make deals for hostages. There was, however, great appreciation on behalf of the United States, which will lead to good, perhaps great, relations between the United States & Turkey!"

Brunson was a pastor at a small evangelical church in Izmir, Turkey. He was detained in October 2016 and held on charges related to espionage and terrorism. On Friday, a court sentenced him to just over three years in prison but let him go for time served in detention. He was sentenced for allegedly helping terror groups.

Turkish President Recep Tayyip Erdogan tweeted a response to Mr. Trump, saying that "as I always pointed out, the Turkish judiciary reached its decision independently." He continued: "I hope that the United States and Turkey will continue their cooperation as the allies that they are, and fight together against terrorist groups."

His release is a victory for Mr. Trump, who has been assiduously courting evangelical Christian voters throughout his campaign and time in office.

After his release on Friday, Brunson flew to Germany for medical care. 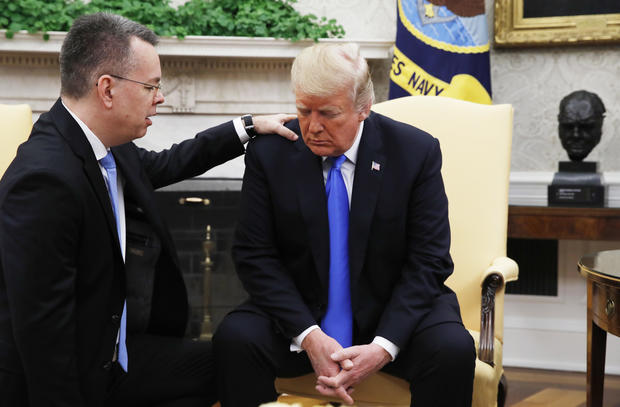 Worker kills two at fire hydrant plant before killing himself