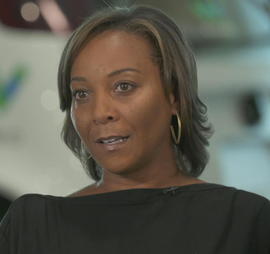 For the first time, Google's self-driving car program, Waymo, is allowing cameras inside their autonomous minivans as the company prepares to launch the nation's first self-driving taxi service. Analysts predict self-driving revenue will hit a staggering $2.3 trillion by 2030 with Waymo capturing 60 percent of that market.

For the past year, Barbara Adams has been part of Waymo's secretive early rider program, made up of more than 400 households in Chandler, Arizona.
"I usually use it for date night on Saturday night. And my favorite thing is going to the mall," Adams said.
Hundreds of autonomous driving Waymo vans operate daily within a roughly 100-square-mile area. For now, they typically have a safety driver up front who can take control. Screens inside show the riders what the Waymo "sees" around it. Cameras, sensors, radar and laser-based lidar allows the on-board computers to see up to three football fields in every direction – all technology Google developed itself and closely guards.
"We want to build the most experienced driver," said Waymo's chief external officer Tekedra Mawakana. "It's actually taken this 10 million miles over 6 billion miles in simulation, over thousands and hundred of thousands of tests, to get to the answer. Yes, we firmly believe that self-driving technology can help make the road safer."
Waymo is also testing self-driving semis, working on public transit solutions and a way to license the self-driving technology to big automakers. But it all starts with the ride-hailing app it'll soon launch in Arizona.
Asked if Waymo is ready for the general public, Mawakana said, "Waymo is ready to give more people the opportunity to ride in our cars."

Samantha Jackson and her 17-year-old daughter are Waymo early riders. Kyla uses the service almost daily to get to school and work.

"I get in, air conditioning's on, so it's nice and cool, and then, like, I'm just doing my homework all the way to work," Kyla said.
The promise of self-driving cars is to free up commuters while reducing the 94 percent of crashes caused by human error. But after last March's deadly collision between a self-driving Uber and a pedestrian, only 21 percent of people say their willing to ride in a driverless car.

But Mawakana says they've found "again and again" that once people experience the technology for themselves, they have their own "personal transformation" and "get it."

While Waymo autonomous vehicles have been involved in crashes, usually minor, they've been the fault of people, not the machine.

"Safety is our focus every day at Waymo…There is the possibility that there will be a mistake like there has been in the self-driving technology space, so we don't walk around laboring under the delusion that mistakes won't happen," Mawakana said.

"I never really worried about what it was gonna be like to have an autonomous vehicle handling things," Samantha Jackson said. "And we were early drivers, it would stop for, you know, if it didn't recognize something, it would always stop."
Waymo does intend to completely remove the safety driver eventually so they'll be no one up front at all. The app-based ride-hailing service is expected to launch in Arizona by the end of the year. 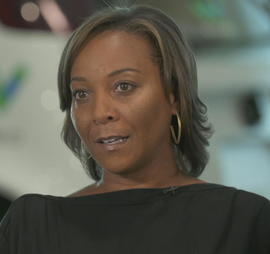