By Kathryn Watson CBS News October 12, 2018, 4:40 PM What's at stake in the Trump administration's ties to the Saudis

While senators threaten Saudi Arabia with sanctions and major business players pull out of a conference the Saudis are hosting, the Trump administration is taking an increasingly conspicuous wait-and-see approach to the disappearance of Washington Post journalist Jamal Khashoggi.

Khashoggi's disappearance has forced questions about the Trump administration's relationship with Saudi Arabia into the spotlight. And while many questions remain unanswered, the Turkish government says they have audio and video of Saudi agents torturing and murdering Khashoggi. The Turks also say the Khashoggi's visit to the embassy occurred with Saudi Crown Prince Mohammed bin Salman's knowledge.

Mr. Trump, however, has been hesitant to criticize the Saudis, despite strong words from some in his own party. Sen. Lindsey Graham, a Republican ally of the president in the Senate, said there will be "hell to pay" if Khashoggi is found dead and the Saudis are responsible. Earlier this week, a number of Republican senators on the foreign relations committee signed a bipartisan letter calling for an investigation and possible sanctions in response to Khashoggi's disappearance.

Khashoggi's case highlights how much is at stake in U.S.-Saudi relations, and in the president's own ties to the Saudis.

The U.S. has had a long and tricky relationship with Saudi Arabia, a key regional ally with an infamous record of human rights abuses. But it was Trump son-in-law and senior adviser Jared Kushner, entrusted with the White House's Middle East Peace portfolio, who paved the way for the cozy relationship between the administration and bin Salman. Kushner and the crown prince dined at the White House in March 2017, and they met again in Riyadh in October 2017.

In May 2017, Saudi Arabia became Mr. Trump's first overseas destination since his inauguration, and it left a positive impression on him. The selection of Saudi Arabia, as CBS News' chief White House correspondent Major Garrett documents in his book "Mr. Trump's Wild Ride," bucked prior presidents' habit of first visiting a more traditional U.S. ally, and signaled that the administration wanted to put a greater emphasis on good relations with Riyadh.

Mr. Trump was given the royal treatment in Saudi Arabia, where the Saudis literally rolled out the red carpet for him and the first family as they deplaned from Air Force One. Mr. Trump even joined Saudi dancers for a sword dance.

"I want to thank King Salman for his extraordinary words, and the magnificent Kingdom of Saudi Arabia for hosting today's summit," the president said at the time. "I am honored to be received by such gracious hosts. I have always heard about the splendor of your country and the kindness of your citizens, but words do not do justice to the grandeur of this remarkable place and the incredible hospitality you have shown us from the moment we arrived."

It was during that trip that Mr. Trump and the Saudis signed letters of intent for the kingdom to buy $110 billion worth of arms from the U.S., although it's unclear if those contracts have ever materialized in full. Brookings senior fellow in foreign policy Bruce Riedel called that figure "fake news," suggesting that the figure didn't mean much without actual, signed contracts for military equipment.

Nevertheless, Mr. Trump cited that $110 billion figure on Thursday, expressing his his reluctance to canceling arms sales from the U.S. to the Saudis. The Saudis, Mr. Trump reasoned, would simply purchase the equipment from elsewhere, like China or Russia, so the investment might as well come to the U.S.

Asked if the Khashoggi case could change the way he deals with top Saudi officials, the president said he "would not be in favor of stopping a country from spending $110 billion" in the U.S.

"We'll have to see what happens," Mr. Trump said in an Oval Office bill signing Thursday. "A lot of work is being done on that, and we're going to have to see what happens. I don't like stopping massive amounts of money that's being poured into our country on — I know they're talking about different kinds of sanctions, but they're spending $110 billion on military equipment and on things that create jobs, like jobs and others, for this country."

"I don't like the concept of stopping an investment of $110 billion into the United States," he continued. "Because you know what they're going to do? They're going to take that money and spend it in Russia or China, or someplace else. So I think there are other ways. If it turns out to be as bad as it might be, there are certainly other ways of handling the situation."

But the president's own businesses have also benefited from transactions with the Saudis. And while Mr. Trump has stepped away from the day-to-day management of those businesses, which are now run by his two older sons, he never fully divested from them.

The Embassy of Saudi Arabia disbursed $270,000 for payments that went to Trump International Hotel between October 2016 and March 2017, according to disclosures filed with the Justice Department.

And earlier this year, according to the Washington Post, the general manager of the Trump International Hotel in Manhattan shared with investors that after two years of decline, revenue from room rentals went up 13 percent in the first quarter of 2018 — largely due to a visit from bin Salman.

The Saudis were boosting Trump businesses long before he took office. According to Mr. Trump's own words, the Saudis have long been heavily invested in Mr. Trump's businesses.

"Saudi Arabia, I get along with all of them," Mr. Trump said at the time. "They buy apartments from me. They spend $40 million, $50 million. Am I supposed to dislike them? I like them very much." 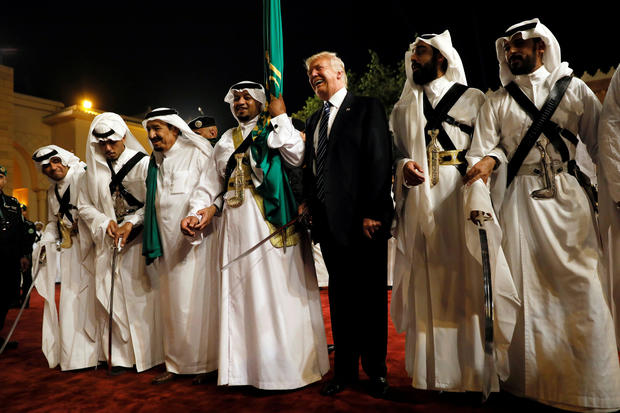