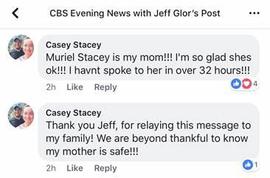 After Hurricane Michael hit Florida, many people were left stranded and unable to reach their loved ones. But one family got the news they needed thanks to the power of television.

"CBS Evening News" anchor Jeff Glor met Muriel Stacey in Panama City. She said she lived her whole life in Michigan but headed south after a heart attack and decades of harsh winters.

She showed Glor the extensive damage to her home after the hurricane. She also said she was unable to contact relatives back in Michigan to let them know she was OK.

Stacey's daughter, Casey, said she was watching the "CBS Evening News" Thursday and saw her mom on TV.

"I just turned the TV on and I just happened to walk out into the living room at the exact time that I saw them walking up to the house and I recognized it instantly," she said. "Once I saw her, I started crying. I could barely hold it together but it was so difficult to stop crying long enough to hear my mother talk and to know that she was OK."

The two still haven't been able to talk, but at least now Casey knows her mom is OK.

She reached out to the "CBS Evening News" on Facebook to tell her story. 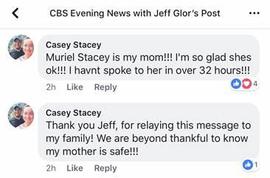