A swift and sudden price jump for their favorite products may be a foreign experience for many younger consumers. After all, for years after the Great Recession inflation hovered below 2 percent as the U.S. economy slowly climbed out of its trough.

But inflation is picking up, while economists say that factors including rising oil costs and the Trump administration's escalating trade war with China may put upward pressure on prices later this year. Compounding those concerns: Employees wages haven't kept up with inflation over the past decade. As a result, the typical worker has suffered a 9.5 percent decline in real, or inflation-adjusted, wages over that time period, according to data from PayScale.

For many Americans, that could start to bite just as the vital holiday shopping season gets underway.

"The average person isn't paying attention to it because it hasn't been a burden to them recently," said Katie Bardaro, chief economist at PayScale, which tracks employee compensation. "We are entering one of the biggest shopping periods, so people will probably start to feel it and see it — that starts with buying the fixings for their meals for Thanksgiving to their gifts for the holidays."

Although workers may feel like they're getting ahead when they receive a raise, many likely aren't analyzing whether it's keeping up with the cost of living, Bardaro noted.

"People are delaying buying houses, they are delaying getting married or having children — the things that show the health of their earnings and future earnings," she said.

To be sure, many economists — including the Federal Reserve — predict inflation will remain tame for the foreseeable future. Yet some experts are concerned that the lowest unemployment rate since 1969 will drive up wages, fueling higher inflation.

The Fed is expected to boost rates several more times in 2019 to head off higher inflation, according to Oxford Economics. At the same time, that will result in higher interest rate costs for Americans who are seeking mortgages or are accruing interest on their credit cards.

Through August, inflation rose at an annualized rate of 2.7 percent. The figure includes the monthly change in prices for goods and services consumed by the typical household, such as gas, housing and food. In 2018, rising fuel costs have helped drive up the inflation rate, as well as higher housing and medical costs. To be sure, consumers received a breather in September, when the Consumer Price Index rose 0.1 percent, less than forecast. On a year-over-year basis, inflation rose 2.3 percent last month.

The cost of some staples of middle-class life is increasing at a faster pace than everyday items such as food and clothing. College tuition, health care and housing have outpaced both inflation and wage growth, leaving more consumers feeling as if they have been left behind.

Investors are closely watching inflation signals, concerned that an acceleration could cause the Federal Reserve to push through more rate increases. That, in turn, would increase the cost of borrowing, which could signal the end of the current fiscal environment of relatively inexpensive loans and credit products. U.S. shares plunged on Wednesday, partly on concerns about rising rates and inflationary pressures, although the losses were pared on Thursday after the government said inflation rose less than some expected last month.

Already, mortgage rates are near 5 percent, which could deter consumers from taking out new mortgages and create a headwind in the housing market.

One growing expense for consumers: oil, pushing up costs at the gas pump and for home heating oil. The national gas price recently rose an average of 3 cents to $2.91, with all but seven states recording price hikes, according to AAA. Prices are near their highest levels in four years.

Prices are rising because of tightening supply paired with strong demand in a robust economy, he noted. "Additionally, the big concern in the market is what happens when Trump Administration sanctions on Iran go into effect on 11/4/18," he wrote in an email, adding that he didn't doesn't see much relief in the short term.

The intensifying trade dispute between the U.S. and China also could lead to higher prices. The Trump administration late last month imposed tariffs on roughly $200 billion of Chinese imports, which could be passed onto consumers. About 24 percent of the tariffs apply to consumer goods, compared with just 1 percent from an earlier round of tariffs, according to an analysis from the Peterson Institute for International Economics.

The new tariffs could boost the overall rate of U.S. inflation by half a percentage point, to 3.2 percent, according to Ian Shepherdson, chief economist at Pantheon Macroeconomics.

Another inflation culprit could ultimately benefit many workers: pay hikes.

The tight labor market is pushing some employers to boost wages, especially for low-wage employees where turnover is high. Amazon, for one, recently said it would boost its base pay to $15 an hour, a decision that could have a ripple effect if competitors feel compelled to match the offer to attract workers.

Wage inflation is at its highest for low-wage earners since the financial crisis, according to Torsten Sløk, chief international economist at Deutsche Bank Securities. Average hourly earnings could jump 3.2 percent for October, he said this week in a research note.

Even so, the wage issue is complicated by the fact that median household income isn't necessarily rising because of higher pay. Instead, many Americans are working longer hours to boost their earnings, according to the Hamilton Project. So far, real wages aren't showing signs of increasing, wrote Hamilton Project director Jay Shambaugh and policy director Ryan Nunn in an analysis.

They note, "Once there are fewer job seekers available to hire, real wages should experience additional upward pressure, but this has not yet occurred." 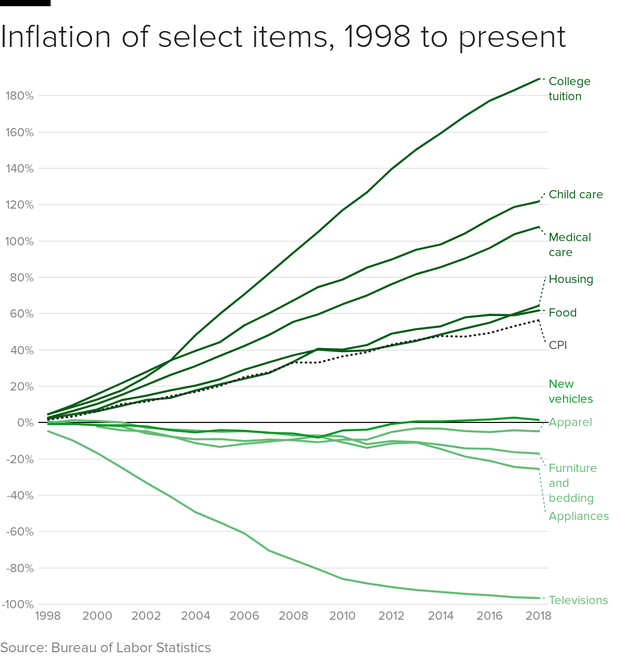