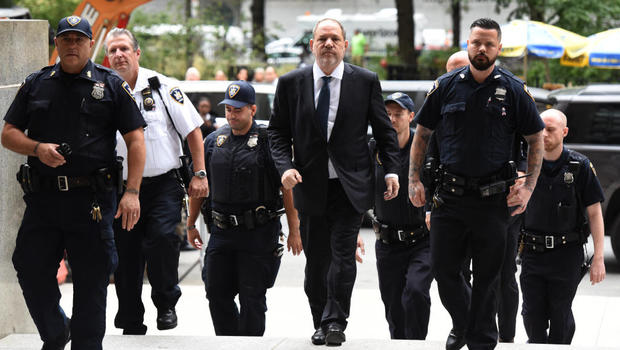 NEW YORK — Manhattan's district attorney dropped part of the criminal sexual assault case against Harvey Weinstein on Thursday after evidence emerged that a police detective had coached a witness to stay silent about evidence that cast doubt on one of his accuser's accounts. Details emerged after the court unsealed a letter that Manhattan prosecutors wrote to Weinstein's lawyer, Benjamin Brafman, in September.

The disgraced movie mogul was back in court Thursday. He previously pleaded not guilty to six felony sex crimes, stemming from allegations brought forward by three women. A judge agreed on Thursday to dismiss allegations by Lucia Evans, one of three accusers in the case.

Weinstein, who has denied all allegations of non-consensual sex, still faces charges over allegations that he raped an unidentified woman in his hotel room in 2013 and performed a forcible sex act on a different woman in 2006.

The letter also said prosecutors had recently obtained an email that Evans wrote in 2015 to the man she later married. They say that account differs from the one she provided to investigators.

It says the accuser told prosecutors that the inconsistencies may have been caused by a flawed memory.

Assistant District Attorney Joan Illuzzi-Orbon told the judge that prosecutors wouldn't oppose dismissal of the count in the case involving Evans, reports CBS New York. She insisted the rest of the case, involving two other accusers, was strong.

Prosecutors said in the newly-unsealed letter that they learned weeks ago that a female friend who was with Evans the night she met Weinstein had given a police detective a contradictory account of what happened.

The woman, prosecutors said, told the detective in February that Weinstein had offered them money to flash their breasts during the restaurant encounter. They initially declined but Evans later told her she had gone ahead and exposed herself to the film producer in a hallway.

The woman also told the detective that sometime after Evans' office meeting with Weinstein, she had suggested what happened was consensual. Weinstein had promised to get her an acting job if she agreed to perform oral sex and she agreed.

According to the witness, who was not named in the court filing, Evans had been drinking and "appeared to be upset, embarrassed and shaking" when she told the story.

Prosecutors said the police detective didn't share any of that information with prosecutors and urged the woman not to reveal details, saying "less is more," and that she had no obligation to cooperate with investigators.

Brafman, Weinstein's lawyer, told the judge he believes Evans lied both to the grand jury and to The New Yorker about her encounter with Weinstein. He also said he believed a police detective had corruptly attempted to influence the case by keeping the witness from testifying about her misstatements.

"The integrity of these proceedings has been compromised," he said.

In a statement released to CBS New York, the New York Police Department said it is "fully confident in the overall case it had pursued against Mr. Weinstein."

"The evidence shows that the criminal case against him is strong," the statement said. "The NYPD will continue to assist the prosecution any way it can to ensure justice is achieved for these brave survivors."

In a statement, a lawyer for Evans said she was disappointed by the DA's decision to "abandon" her.

"Let me be clear: the decision to throw away my client's sexual assault charges says nothing about Weinstein's guilt or innocence. Nor does it reflect on Lucia's consistent allegation that she was sexually assaulted with force by Harvey Weinstein," said attorney Carrie Goldberg. "It only speaks volumes about the Manhattan DA's office and its mishandling of my client's case."

Weinstein is free on $1 million bail. 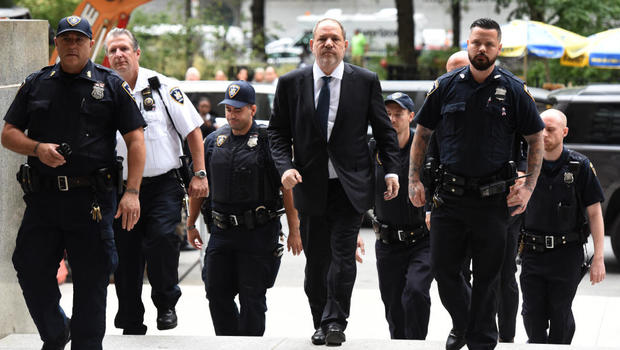