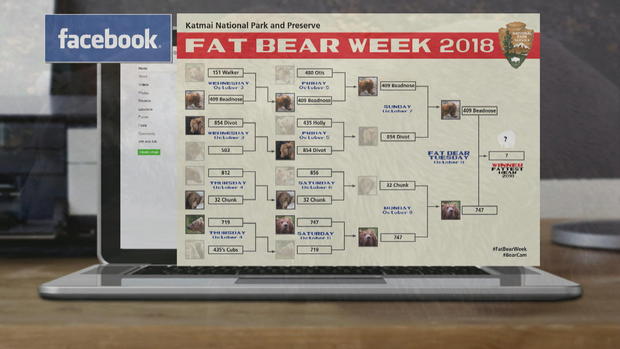 A high-stakes, week-long competition in Alaska ends on Tuesday, but the contestants don't even know they're competing. One of the brown bears in Alaska's Katmai National Park will soon be named the winner of Fat Bear Week. Fans are voting in an online contest for the bear that's done the best job packing on the pounds before hibernation, reports "CBS Sunday Morning's" Lee Cowan.

"A fat bear is a healthy bear, and it's something to celebrate," said Andrew Lavalle, a park ranger at Katmai National Park, a remote place even by Alaska standards.

Chances are you will never visit Katmai, but bear cams can bring the bears to you. One thing impossible to ignore is how much weight they gain before hibernation. According to Lavalle, brown bears have to eat a year's worth of food in six months.
Their long winter's nap doesn't include GrubHub deliveries, so this is life or death. The National Park Service thought it could also be educational and fun thanks to likes on their Facebook page. That's how Fat Bear Week was born four years ago, complete with a March Madness-style bracket.

This year, two-time reigning champion Otis looked to be a heavy favorite but last Friday lost out to roly-poly Beadnose. That prompted one fat bear fan to write: "Otis is getting ROBBED because Beadnose looks so cozily rotund in a sitting position. IS THERE NO JUSTICE?"

Another contestant, Chunk, powered through some 30 salmon a day – gaining four pounds a day – to get to a sleeping weight of about half a ton. But it wasn't enough to out-fish the bear known as 747, who is now flying into the championship match-up against Beadnose.

"747 is aptly named just look at that wide body," reads one post.

"We see these bears day in and day out. It's kind of old news for us some days, but to see people from around the world to have an affinity for these wild creatures is pretty amazing," Lavalle said.

The final vote comes Tuesday night, but the paparazzi are out of luck. The victor will likely be somewhere far away sleeping it off, blissfully unaware of their newfound fat fame. 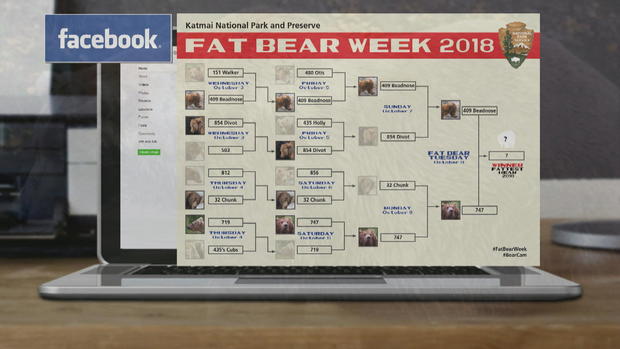