U.S. Interior Secretary Ryan Zinke approved a 20-year ban on new mining claims in the towering mountains north of Yellowstone National Park on Monday, after two proposed gold mines raised concerns that an area drawing tourists from the around the globe could be spoiled.

As Zinke signed the mineral ban at an outdoor ceremony in Montana's Paradise Valley, a bank of clouds behind him broke apart to reveal the snow-covered flank of Emigrant Peak. The picturesque, 10,915-foot mountain has been at the center of the debate over whether mining should be allowed.

The former Montana congressman was joined by local business owners and residents who pushed for the ban after companies began drafting plans for new mines in an area frequented by wolves, elk, bears and other wildlife.

"I'm a pro-mining guy. I love hardrock" mining, Zinke said. "But there are places to mine and places not to mine."

Zinke's order extends a temporary ban imposed in 2016 under former President Barack Obama on new claims for gold, silver and other minerals on 47 square miles of public lands in the Paradise Valley and Gardiner Basin. Most of the land is within the Custer Gallatin National Forest.

The rocky peaks and forested stream valleys covered by the ban are popular with hikers and other recreational users. Wildlife roam back and forth across the Yellowstone border, and the scars of historical mining still are visible on some hillsides.

Mining companies and industry representatives said the area includes historical mining districts that shouldn't be barred from future development. Mining claims give their holders legal rights to explore for minerals.

Monday's action does not stop mining on private land or take away pre-existing mining claims on public lands. But supporters said it would make a large-scale mine in the area much less likely because adjacent public lands would be needed to make such a project economically feasible.

John Mears, president of Lucky Minerals, said his company is not backing down. The Vancouver, Canada-based company plans to press ahead with exploration work next year on private lands around Emigrant Peak that are inside one of the areas where mining has been banned.

Mears was parked down the road from Monday's event with a large sign propped against his truck that read, "Sec. Zinke … Why won't you meet with me?"

"It's up to the government to decide if we have valid existing rights, but in the meantime, we'll carry on," Mears said. "We won't be able to acquire any more ground, but we have enough."

Mining opponents expressed optimism that the ban would make it impossible for Lucky Minerals or any other company to develop mines.

"When you take the public lands out of the equation, it really dampens it," said Bryan Wells, who lives in the small community of Old Chico at the base of Emigrant Peak.

The administration's action was notable given President Donald Trump's outspoken advocacy for the mining industry and his criticism of government regulations said to stifle economic development.

It comes as Trump has sought to lift protections on public lands elsewhere, including his controversial decision to shrink the size of Bears Ears and Grand Staircase-Escalante national monuments in Utah.

Zinke said the threat of mining near Yellowstone was different because residents and business owners were in agreement on the issue. The Utah monuments have been controversial since their creation.

The mining ban had bipartisan backing in Montana, where Democrats and Republicans alike have been eager to cast themselves as protectors of the natural beauty of the Yellowstone region.

Colin Davis with the Yellowstone Gateway Business Coalition said the group will now focus on making the ban permanent through pending measures in Congress. 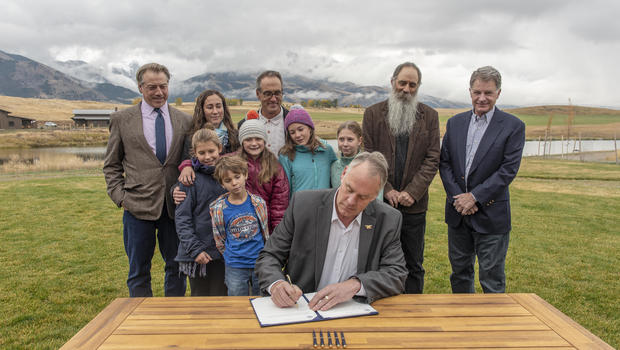 Trump to visit Japanese warship in display of military solidarity