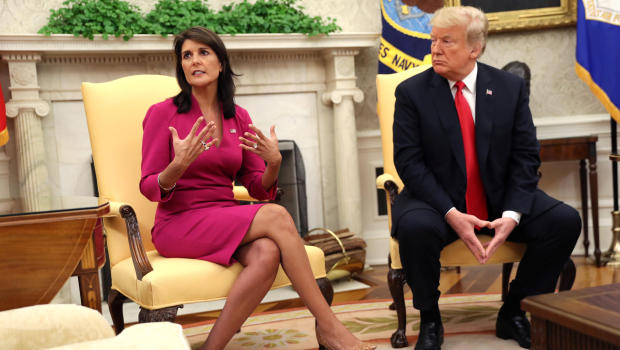 Nikki Haley, U.S. ambassador to the United Nations, is leaving her post at the end of the year, President Trump announced in the Oval Office Tuesday morning. Haley told reporters she will not run in 2020 and instead campaign for the president, quashing speculation that she might chart her own political course challenging him.

Mr. Trump, meeting with Haley in the Oval Office, informed reporters Tuesday Haley had told him about six months ago that she wanted a break. The president said Haley has been "very special" to him, they hate to lose her, and the two will be in constant touch. Mr. Trump said hopefully Haley can come back to his administration, adding, "You can have your pick."

The president said he will select a successor to Haley in the next two to three weeks. Haley's replacement is unclear, but Mr. Trump said a number of people would like to do Haley's job, and claimed it's a more "glamorous" position than it was a couple years ago.

Haley, for her part, said the post had been an honor of a lifetime. Haley said the U.S. is strong again in a way the nation should be proud of. Haley also said nothing is set in terms of where she will land next. Haley said "there's no personal reason" for her impending departure, it's just "very important" for government officials to know when it's tim to step aside and let someone else rotate in with renewed energy.

Members of the administration were equally warm in their reception of Haley, sending messages of gratitude to Haley following news of her departure. Vice President Mike Pence echoed the president's message on Tuesday, commending Haley's "frank and clear-eyed assessments of global threats" in her role at the United Nations.

Mr. Trump's eldest daughter Ivanka said Haley had served the country with "dignity and distinction" calling her a "bold reformer" in the UN. Haley specifically noted her friendship with Ivanka and her husband Jared in her comments on Tuesday, referring to the president's son-in-law as a "hidden genius."

Haley's impending departure came as a shock to Washington, amid crucial times for foreign policy, and one month ahead of November's midterms. Axios first reported Haley's resignation.

Haley has charted her own course during the Trump administration, backing the president but also admitting in a recent op-ed that sometimes she disagrees with him. Her op-ed was a response to an anonymous op-ed published in the New York Times from someone who identified as a senior administration official. Haley's op-ed was headlined, "When I challenge the president, I do it directly. My anonymous colleague should have, too."

"I, too, am a senior Trump administration official," Haley wrote in her op-ed. "I proudly serve in this administration, and I enthusiastically support most of its decisions and the direction it is taking the country. But I don't agree with the president on everything. When there is disagreement, there is a right way and a wrong way to address it. I pick up the phone and call him or meet with him in person."

Haley was an opponent of Mr. Trump's during the 2016 presidential race, and endorsed Sen. Marco Rubio when she left the race. Since then, the two made amends — although, as Haley noted, she and the president were not always in lock-step agreement. 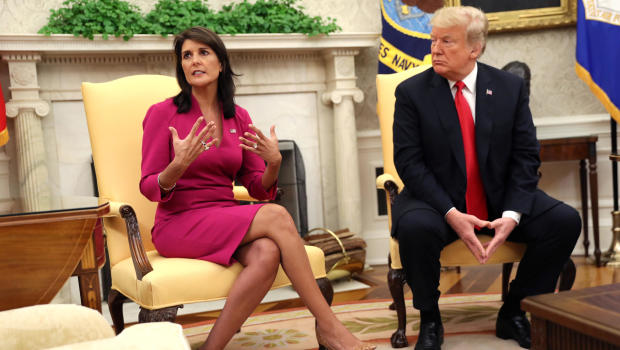