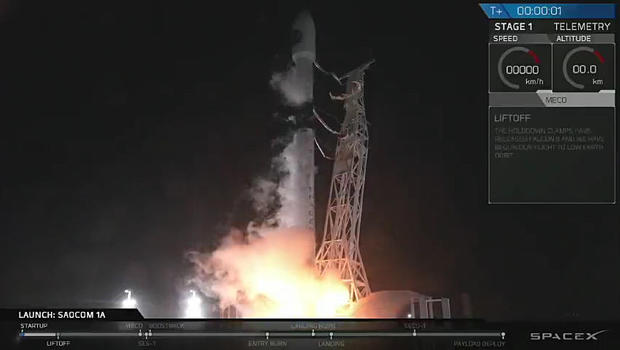 Lighting up the early evening sky, a SpaceX Falcon 9 rocket streaked away Sunday from California, boosting an Argentine environmental satellite into orbit. The rocket's previously flown first stage then flipped around and returned to the Vandenberg Air Force Base launch site, chalking up SpaceX's first West Coast landing.

The booster put on a spectacular show as it descended tail first toward Landing Zone 4 just a few hundred yards from the rocket's launch stand, deploying four legs and firing up one of its nine Merlin engines, seemingly at the last moment, to slow down for touchdown in a cloud of fiery exhaust.

The descent was heralded in dramatic fashion by loud sonic booms that rumbled across Southern California as the rocket homed in on its landing pad.

Such sights and sounds are familiar to residents near the Cape Canaveral Air Force Station in Florida where SpaceX first landed a Falcon 9 booster in December 2015. Between then and now, the company chalked up 10 more successful landings at the Air Force Station and another 18 on off-shore droneships.

But Sunday's flight marked the first time SpaceX attempted a landing at Vandenberg, a milestone made possible by extensive environmental and safety studies that concluded the noise and possible aftermath of a failure would not cause any significant damage or harm to area wildlife.

SpaceX founder Elon Musk was a bit more succinct in a pre-launch tweet: "Sonic boom warning. This won't be subtle."

But as always, the landing was a secondary objective. The primary goal of the flight was to boost Argentina's SAOCOM 1A satellite into an orbit around Earth's poles, the first of two orbital radar stations capable of "seeing" through clouds and at night to measure soil moisture, a key indicator of crop yields, droughts and floods.

The mission got underway at 7:21:28 p.m. PDT (GMT-7; 10:21 p.m. EDT), a bit less than an hour after sunset, when the booster's nine Merlin 1D engines ignited, throttled up to full thrust and quickly pushed the 229-foot-tall rocket away from Launch Complex 4-East.

To put the satellite into the intended polar orbit, the Falcon 9 quickly arced away to the south over the Pacific Ocean, smoothly accelerating as it consumed its liquid oxygen and kerosene propellants and lost weight.

Two minutes and 20 seconds after liftoff, now well out of the dense lower atmosphere, the Merlin engines shut down, the first stage was jettisoned and a single engine powering the Falcon 9's second stage ignited for a planned 10-minute burn.

The first stage, meanwhile, flipped around and re-started three of its nine engines to reverse course and head back toward Vandenberg. Nearing the top of the discernible atmosphere, the booster fired the engines again to slow down for re-entry.

Using titanium "grid fins" at the top of the rocket for steering and attitude control, the booster plummeted tail-first toward Vandenberg. Finally, dropping straight down toward Landing Zone 4, the rocket's four landing legs deployed, a single engine re-started and the booster settled to a picture-perfect touchdown in a cloud of smoke.

Two minutes later, the second stage engine shut down as planned and two-and-a-half minutes after that, the SAOCOM 1A satellite was released into the planned polar orbit.

It was SpaceX's 17th flight so far this year, the company's 44th successful launch in a row and the 63rd overall for the Falcon 9 family of rockets, including the February debut of its three-core Falcon Heavy rocket. SpaceX's landing record now stands at 30 successful booster recoveries, 11 at Cape Canaveral, one at Vandenberg and 18 on droneships. 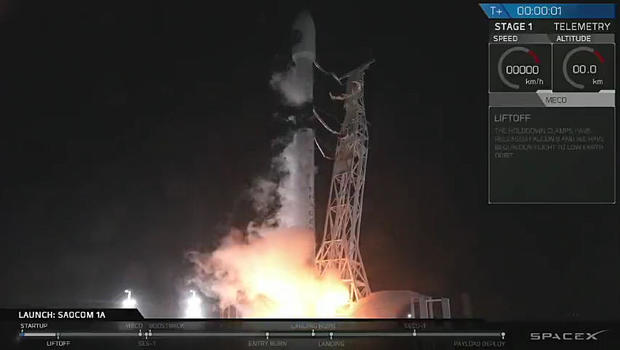 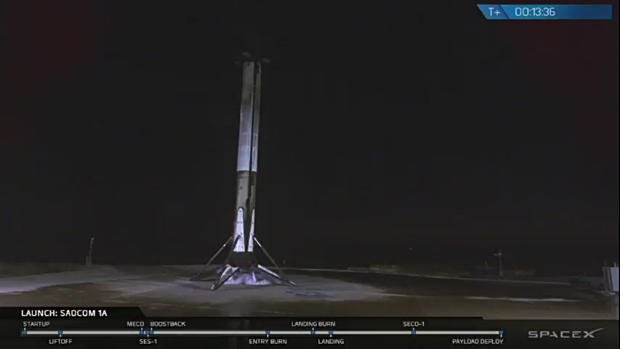