"Sometimes the biggest risk is not taking risk," said Reid Hoffman, one of Silicon Valley's most high-profile investors, and co-author (with Chris Yeh) of a new book called "Blitzscaling: The Lightning-Fast Path to Building Massively Valuable Companies" (Currency).

Hoffman was an early investor in Facebook and is a co-founder of Linkedin. He is also a partner at the venture capital firm Greylock. He interviewed hundreds of entrepreneurs from companies like Facebook, Netflix and Airbnb for his new book, and describes "blitzscaling" as "prioritizing speed over efficiency" when building a company.

The reason why a small company would want speed over efficiency, he told "CBS This Morning" on Monday, is that, "This is the modern way you build massive companies. Look at Airbnb, Uber, a lot of these companies that ten years ago were ideas on the back of napkins, tiny, and now are global, transformational companies."

Hoffman said establishing supremacy on a global scale is imperative for companies' survival today. "We're now in this place for what we call 'Glengarry Glen Ross' markets," he said, referencing David Mamet's Pulitzer Prize-winning play about real estate salesmen. "'First prize a Cadillac, second prize steak knifes, third prize you're fired.' So, it really matters to establish these companies on a global footprint as fast as possible."

Co-host John Dickerson said, "Some companies that I've talked to, small startups, have a great idea , [but], they're worried about if they get too big, too fast, they'll spread out and lose it, it will just be a mess, because they can't keep track of getting bigger."

Hoffman replied, "You have to take those risks. It's scary, it's uncertain, you can blow up and you can make mistakes, but only by applying that speed to scale is the only way you can win."

One of the concepts behind Hoffman and Yeh's "Blitzscaling" is how chaos can be helpful.

"The reason why you have to embrace chaos is because you're growing too fast, you're changing your management, you're changing what's going on with your product. You have to understand that it's not going to have as comfortable efficiency where you learn it and iterate slowly. You're going to have massive changes every six to 12 months, including how you run the company.

"So, by embracing chaos and knowing that we're going to be kind of running in a way that looks totally chaotic, what we're doing in order to get to be the first to scale is the way that you actually succeed."

"These are counterintuitive things: embrace chaos, ignore the customer (because the customer is always right), launch a product that embarrasses you," said co-host Gayle King. "What company wants to do that?"

"There's a lot of companies that have done this," Hoffman said. "But they didn't do it on purpose."

"Essentially, your future customers are the ones than matter, and if you need to be able to get your product to market and be learning from your customers and learning how to iterate it, launching a product that embarrasses you – obviously embarrassment is not something you deeply desire, but it's a way of prioritizing speed, engaging with your customer, learning from them, and being the first that's in that learning curve, in terms of getting to scale."

"It's basically taking down the usual barriers to risk-taking, right?" said Dickerson. "So, if people are worried about failing, they're worried they're going to upset their customers, they're worried people are going to be unhappy in the workplace, your argument is, forget about that – you want keep taking risks because the risks makes you bigger faster?" 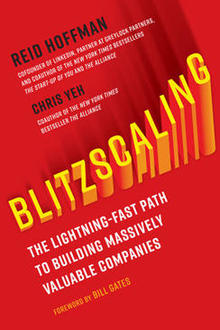