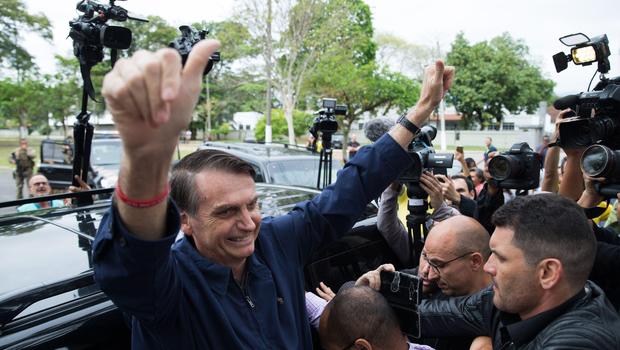 RIO DE JANEIRO — Brazilians showed their disgust with corruption and rising crime in the first round of presidential voting, nearly giving an outright victory to a brash-speaking former army captain who has promised to restore "traditional values," jail crooked politicians and give police a freer hand to shoot drug traffickers. But with far-right congressman Jair Bolsonaro getting 46 percent of the vote Sunday, short of the 50-plus percent he needed, voters also signaled they were not quite ready to make a final decision.

On Oct. 28, Bolsonaro will face second-place finisher Fernando Haddad in a runoff vote. Haddad, the Workers' Party standard-bearer who was appointed by jailed ex-President Luiz Inacio da Silva, got 29 percent in the first round, and polls have predicted a close race in the runoff.

Bolsonaro was expected to come out in front on Sunday, but he far outperformed predictions, blazing past competitors with more financing, the institutional backing of traditional parties and much more free air time on television. The candidate from the tiny Social and Liberal Party made savvy use of Twitter and Facebook to spread his message that only he could end the corruption, crime and economic malaise that has seized Brazil in recent years — and bring back the good old days and traditional values.

His appeal to voters for a return to "traditional values," his embrace of social media messaging as a way to communicate directly with the public, and his brash style have led to some Brazilian media dubbing him the "Trump of the Tropics." His rhetoric has shown stark parallels with U.S. President Donald Trump.

"This is a victory for honest people who want the best for Brazil," said Bianca Santos, a 40-year-old psychologist who gathered outside a hotel where Bolsonaro was watching the returns. "I believe he is the only one with a serious plan to end crime."

For voters, Bolsonaro and Haddad represent starkly different visions for the future. Bolsonaro has promised to slash spending, privatize as much as possible in a country long heavy on state control and be a check on social movements that have gained much ground in recent years.

Where Brazil's next leader takes the economy, the largest in Latin America, will have a large impact on surrounding countries that are trading partners with Brazil. The next leader will also have an influence on Venezuela, both diplomatically and practically, as thousands of Venezuelans have crossed Brazil's northern border.

Bolsonaro has promised a harder line on Venezuela and other leftist regimes and closer ties with the United States. It's not clear what Bolsonaro would do to further isolate Venezuelan President Nicolas Maduro, but he once suggested creating camps for the Venezuelans who have fled the country's economic collapse.

But much of his campaign focused on domestic issues. Bolsonaro has painted a nation in collapse, where drug traffickers and politicians steal with equal impunity, and moral rot has set in. He has advocated loosening gun ownership laws so individuals can fight off criminals, encouraging police to shoot more crooks and restoring "traditional" Brazilian values — though some take issue with his definition of those values in light of his approving allusions to the country's 1964-1985 dictatorship and his derisive comments about women, blacks and gay people.

Haddad, a former education minister, has also spent much time arguing that da Silva, his mentor, was unfairly jailed — a strategy aimed at attracting voters who still feel strong affection for da Silva despite a corruption conviction. Workers' Party stalwarts are still fuming about the 2016 impeachment and removal from office of President Dilma Rousseff, da Silva's predecessor.

Matthew Taylor, an associate professor of Latin American politics at American University, said that in the weeks before the runoff vote Bolsonaro will likely hit Haddad hard on the theme of corruption within the Workers' Party and da Silva, who Brazilians simply call Lula.

"Haddad has a huge albatross around his neck because of the corruption and all the rhetoric about the impeachment and Lula," said Taylor. "Bolsonaro will hit back on that."

Indeed, Bolsonaro already showed his ability to tap deep anger in Brazil with the traditional political class and "throw the bums out" rage after a massive corruption investigation revealed staggering levels of graft.

Still, he alienated nearly as many people as he attracted with his offensive comments. And polling shows Bolsonaro will face a tight race with Haddad in the second round — before Sunday's first round, polls showed a statistical dead heat in a potential second round.

Many voters, already disillusioned with their democracy, said they felt trapped by the choice between the two front-runners, a sentiment likely to deepen in the weeks to come.

"I didn't like any of the candidates and I felt obliged to choose the lesser of two evils," said Frederico Vasconcellos, a 68-year-old retired metalworker. The Workers' Party "managed to ruin the country with corruption and theft. … So I decided to vote for Bolsonaro, who is the only one who can block the return of the Workers' Party."

Though they come from opposite sides of the political spectrum, both Bolsonaro and Haddad ran campaigns based on nostalgia for a better time. Bolsonaro frequently evoked the country's military dictatorship amid promises of a return to traditional values and safer, simpler times.

"The country is on the brink of chaos," Bolsonaro said in a Facebook live after a second round was announced. "We can't let the left advance even one more step."

For his part, Haddad called on "democrats" to unite around his candidacy. In a broadside against Bolsonaro, who frequently talks about liberalizing gun laws, Haddad said: "We don't carry guns. We carry the force of arguments to defend Brazil and its people." 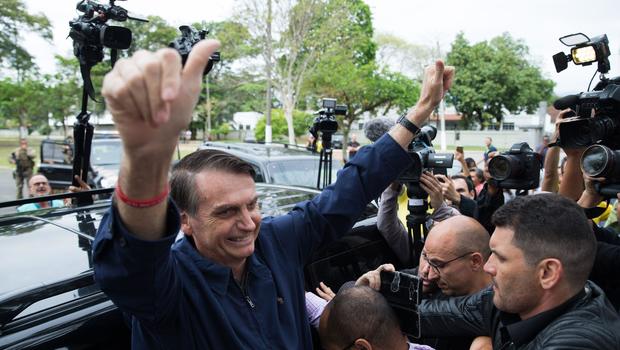 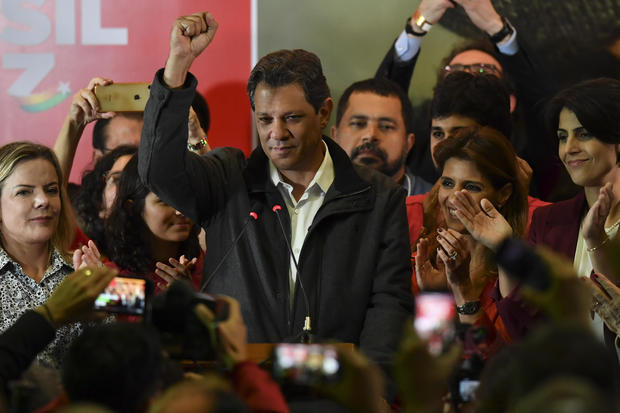 Mayor gunned down shortly after taking office in Mexico