The choice of two American economists, William Nordhaus and Paul Romer, to jointly share this year's Nobel prize in economics comes with a theme and underlying directive: Countries around the globe must work together to combat the greatest environmental threat of our time.

"It's an ingenious pairing," David Warsh, author of the 2007 book "Knowledge and the Wealth of Nations" told the Associated Press. "Nordhaus has been concerned all along with repairing the damage" to the environment, while "Romer has been writing about the means at your disposal" to take on the technological challenge, he added.

Monday's prize awards "innovation, climate and economic growth," Goran Hansson, secretary general of the Royal Swedish Academy of Sciences, said in announcing the honor. "The message is that it's needed for countries to cooperate globally to solve some of these big questions," he noted.

While both academics have done their work apart from one another, their research taken together can help confront politically challenging issues such as the United States under President Trump pulling out of the Paris accord on fighting climate change.

"One problem today is that people think protecting the environment will be so costly and so hard that they want to ignore the problem and pretend it doesn't exist," Romer, a New York University professor, told a news conference after the announcement Monday.

"Humans are capable of amazing accomplishments if we set our minds to it," Romer added.

The awarding of the prize proved timely, given it coincided with the release of findings from a United Nations panel warning of ominous consequences of climate change and calling on world leaders to respond with greater urgency.

The report from the Intergovernmental Panel on Climate Change cited Nordhaus' research in detailing how Earth's weather, health and ecosystems would be better off if nations more aggressively curbed human-caused planet warming of 0.9 degrees Fahrenheit (a half degree Celsuis) rather than a previously agreed-on target of 1.8 degress F (1 degree C).

A trailblazer in gauging the economic impact of climate change, Yale University's Nordhaus is known for advocating a tax on carbon emissions. Carbon dioxide spews into the atmosphere when fossil fuels are burned, with the heat-trapping "greenhouse gas" pegged as the culprit for the Earth's warming.

The notion of taxing polluters rather than imposing government edicts to cut emissions is based on the premise it would prompt companies to devise new ways of curbing pollution.

Romer has researched how innovation by companies and governments drives prosperity and studied how to go about encouraging it. He's focused on the theory that ideas, once brought to fruition, can be expanded widely and easily at little added expense.

Nordhaus' brother, Bob, is a prominent environmental attorney who penned portions of the Clean Air Act of 1970, specifically the part about allowing the government to regulate previously unnamed pollutants.

Romer is the son of Roy Romer, the former governor of Colorado credited with the state's economic growth in the 1990s.

"Like many young people raised in the shadow of a successful parent, I tried to strike out in a different direction, studying mathematical physics and cosmology in college," Paul Romer noted in an NYU biography. "Graduate work in economics (first at MIT, then Queens University, and the University of Chicago) was a compromise that brought me back toward the policy concerns I had been exposed to as a youth but still left plenty of room for abstract theorizing of the type that attracted me to physics."

— The Associated Press contributed to this report. 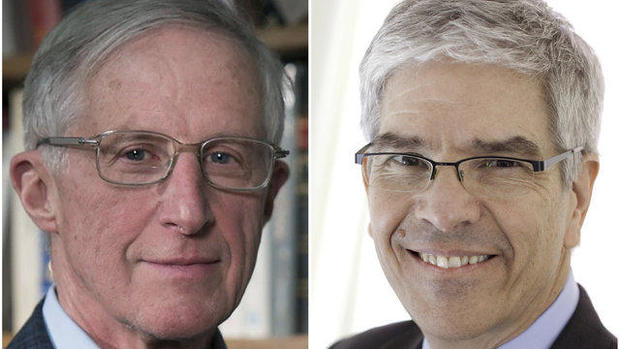