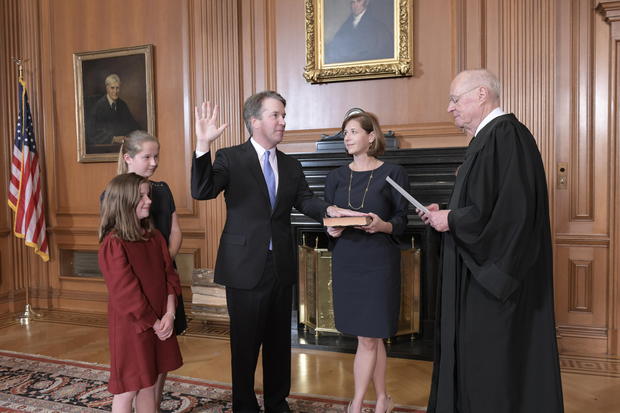 One voted no and one voted yes, but both put their political futures in jeopardy

Last night, Brett Kavanaugh was sworn in as the 114th justice of the Supreme Court of the United States. The bitter confirmation debate in the Senate ended with the closest vote in well over 100 years. When the roll call was taken two senators cast votes that could threaten their careers. They were undecided until the final days and might have voted either way. These two women, a Democrat and Republican came out of the battle with opposite views.

Heidi Heitkamp, Democrat of North Dakota, and Susan Collins, Republican of Maine, sat down with us to explain their view of Judge Kavanaugh, his accusers and why they may have voted against their own political interests.

Yesterday, outside the Capitol, more than 160 protestors were arrested.

Inside the Senate, the vote was interrupted again and again. Vice President Pence, in his role as president of the Senate tried to control the chamber, as late-deciding senators attempted to vote.

Among those voting through the protest was Republican Susan Collins of Maine.

Scott Pelley: Senator you came to this interview on Capitol Hill with a security detail. What has all of this been like for you?

Sen. Susan Collins: Well it's been very difficult. I have had the honor of serving in the Senate for nearly 22 years and this is as ugly a situation as I have ever seen during that time.

Sen. Susan Collins: I have had to have security because of threats against me and family members and staffers and this has been unlike anything I have ever been through.

Sen. Susan Collins had been the hope of both parties. She is the most moderate Republican who often votes against the GOP.

Friday, protestors shouted for a 'no' at the moment Collins revealed her decision.

Collins on Senate floor: I will vote to confirm Judge Kavanaugh.

Sen. Susan Collins: I am comfortable with the decision that I made. I spent an enormous amount of time in the first part of the confirmation process studying the judge's 12-year record as a circuit court judge. I was satisfied at that point, started working on the speech and then these devastating allegations are made that sends the whole thing into a tailspin.

Christine Blasey Ford at Senate Hearing: I believed he was going to rape me. I tried to yell for help.

It was the testimony of Dr. Christine Blasey Ford that left Republican Collins with severe doubts.

Sen. Susan Collins: I had read her anonymous letter, or her redacted letter, and questioned Judge Kavanaugh about it over the phone in a subsequent interview.

Scott Pelley: When you talked to Judge Kavanaugh privately on the phone about the letter, what did he say?

Sen. Susan Collins: He categorically and emphatically denied the allegations.

Scott Pelley: When you saw Dr. Ford's testimony what did you think?

Sen. Susan Collins: She was clearly terrified, traumatized and I believed that a sexual assault had happened to her. What I think she is mistaken about is who the perpetrator was. I do not believe her assailant was Brett Kavanaugh.

Democratic Senator Heidi Heitkamp is close to Republican Collins, but far removed from her friend's decision.

Sen. Heidi Heitkamp: When this nominee was announced I had a completely open mind. Had a chance to meet him. In fact, I liked him. I had a chance to begin to review his judicial record and there was really nothing at that point that I believe was disqualifying for him to serve.

Scott Pelley: You were going to vote yes?

That is, until the fateful hearing.

Sen. Heidi Heitkamp: Two things stand out. First off, I think that her story was completely believable. And I found his performance to be disturbing.

Kavanaugh at hearing: This is a circus!

Sen. Heidi Heitkamp: I think you know, you can understand the anger, uh, especially if you believe you're wrongfully accused. But as the questioning went on and really, at the point that he had his interaction with Amy Klobuchar, it was jaw dropping for me.

Sen. Amy Klobuchar at Senate Hearing: So you're saying there's never been a case where you drank so much that you didn't remember what happened the night before, or part of what happened?

Judge Kavanaugh at Senate Hearing: It's — you're asking about, you know, blackout. I don't know. Have you?

Sen. Amy Klobuchar at Senate Hearing: Could you answer the question, judge? I just — so you — that's not happened. Is that your answer?

Judge Kavanaugh at Senate Hearing: Yeah, and I'm curious if you have.

Sen. Heidi Heitkamp: And I thought, "I have a responsibility not only to find somebody academically and intellectually qualified, but qualified by temperament, impartiality and by, uh you know, what we, what we see, empathy."

Sen. Dick Durbin at Senate Hearing: With what degree of certainty do you believe Brett Kavanaugh assaulted you?

Sen. Heidi Heitkamp: I think when Senator Durbin asked her how certain she was and she looked at him and she said, "I'm 100% certain," I believe her.

Scott Pelley: The senators who have decided to vote in favor of Judge Kavanaugh's nomination seem to believe that he was wrongfully accused.

Sen. Heidi Heitkamp: Everybody's gonna make their own judgment. And I have to tell you, my judgment on her experience is based on a lot of experience working with domestic assault victims, domestic violence victims.

Scott Pelley: Did you read the FBI report?

Sen. Heidi Heitkamp: I did. But I didn't find the information there particularly enlightening.

Sen. Susan Collins: Even after the FBI has interviewed everyone whom Dr. Ford has named as present that horrible night that she remembers, every single one of them including her best friend has no recollection of anything like this.

Democrat Heitkamp and Republican Collins often meet in the middle on common ground. They also share a political vulnerability. Heitkamp is a Democrat in conservative North Dakota. Collins is a Republican in a state with many independent-minded voters.

Scott Pelley: Your decision is not going to play well back home in Maine.

Sen. Susan Collins: That is likely true. I did not try to weigh a political calculus to this decision. It's too important for that. I just had to do what I think is right.

Scott Pelley: A website went up over these last couple of weeks collecting funds for whoever your opponent may be in 2020. And the deal was that if you voted for Kavanaugh, then the credit card pledges would be processed. If you voted against Kavanaugh they wouldn't process the credit card numbers and something over $2 million was raised.

Sen. Susan Collins: This is a classic quid pro quo as defined in our bribery laws. They are asking me to perform an official act and if I do not do what they want, $2 million plus is going to go to my opponent. I think that if our politics has come to the point where people are trying to buy votes and buy positions, then we are in a very sad place.

Collins doesn't face reelection for two years, but Democrat Heitkamp's situation is much more perilous. She's up for reelection now. And in August, Judge Kavanaugh's support in North Dakota was running 60 percent.

Scott Pelley: At this moment, about four weeks before the election, you are running behind your Republican challenger in North Dakota. A political consultant would've told you that voting for Kavanaugh would've been better for you.

Sen. Heidi Heitkamp: Yeah, I don't think there's any doubt about that. I think that the politically expedient vote here was a, a yes vote.

Scott Pelley: Why not then?

Sen. Heidi Heitkamp: Because this isn't about politics. This is about a lifetime appointment on the Supreme Court. This is about a responsibility that we have as leaders, a responsibility that we have to exercise the judgment that we were sent here to exercise. I have too much respect for the institution of the Supreme Court. And I'm not gonna be the person who, um, makes a decision based on whether I get six more years in Washington DC. I'm going to make the decision based on what I think about the institutions.

Scott Pelley: That may make you rare in the Senate.

Sen. Heidi Heitkamp: In 2000 when I was running for governor I was diagnosed with breast cancer. And it was serious. You know, my doctor afterwards told me, "You have a 28% chance of living ten years." That was 18 years ago. And so, I tell young people, I say, "You have you have two accounts. You have a bank account. But you have a time account. What are you gonna do with your time? Do I have work that I wanna continue to do? Absolutely. Do I wanna compromise my principles and my conscience for that job? No. And do I wanna compromise the Supreme Court for that job? No.

Scott Pelley: You are rare for many reasons but one of the reasons is you are a pro-choice Republican. Many of your opponents are going to say 'she's pro-choice, she's pro-women's rights and she just sent a man accused of sexual assault to the Supreme Court of the United States.

Sen. Susan Collins: I would never vote for someone who had committed sexual assault or who had lied about sexual assault that's not a hard call for me. I would have voted no if I disbelieved Judge Kavanaugh, but given his denials and the lack of evidence that this happened I just did not think that it was fair to ruin the life of this distinguished judge and his family over allegations that cannot be proven.

Scott Pelley: There are many who believe that Judge Kavanaugh will be the vote that results in abortion becoming illegal in the United States. And I wonder if you're concerned about that.

Sen. Susan Collins: I could not vote for a judge who had demonstrated hostility to Roe v. Wade, because it would indicate a lack of respect for precedent. What Judge Kavanaugh told me, and he's the first Supreme Court nominee that I've interviewed, out of six, who has told me this, is that he views precedent not just as a legal doctrine, but as rooted in our constitution.

Vice President Pence on Senate floor: On this vote, the ayes are 50, the nays are 48, the nomination of Brett M. Kavanaugh of Maryland to be an Associate Justice of the Supreme Court of the United States is confirmed.

The vote was the closest for the confirmation of a Supreme Court justice since 1881. Brett Kavanaugh was sworn in hours later. The Senate is left riven by partisanship. While across the street, the Supreme Court's new term will try to reconcile a shift in philosophical balance among the justices with the words carved above the door: "Equal Justice Under Law." 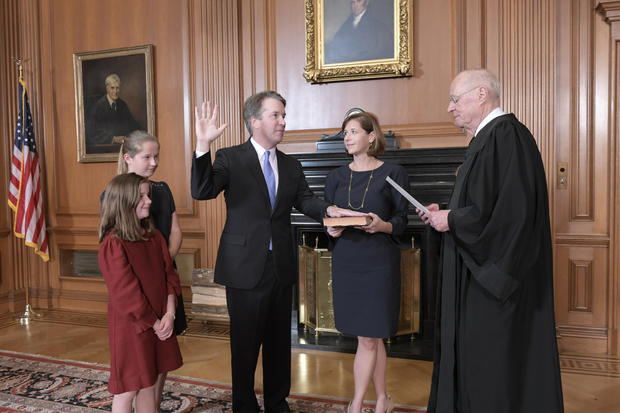 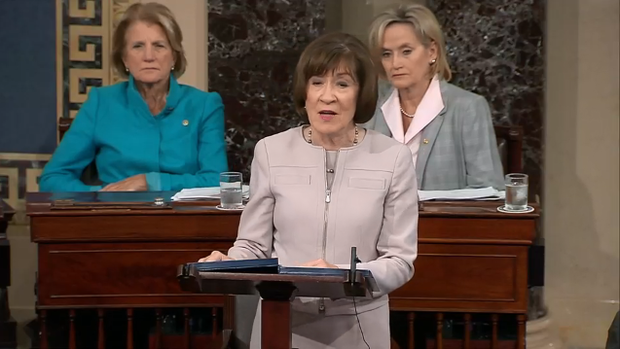 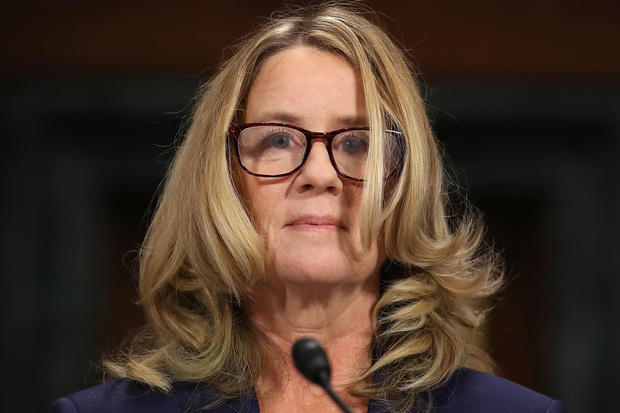 Man with autism to become first nonverbal graduate of UCLA

Uvalde residents seek answers from police over response to shooting