"I think she will never recover from this," Mr. Trump said in an interview with the Washington Post. "I think the people from Alaska will never forgive her for what she did."

Murkowski was the only Republican who did not vote to confirm Kavanaugh. She initially voted no, and then withdrew her "no" vote to instead re-list herself as "present." She did this as a courtesy to her Republican colleague, Sen. Steve Daines, who is in Montana to attend his daughter's wedding and would have voted "yea" on Kavanaugh.

Murkowski is not up for re-election until 2022. Although her fellow senator from Alaska, Republican Dan Sullivan, voted for Kavanaugh, Alaska's governor and lieutenant governor opposed his confirmation.

"I think what Susan Collins did for herself was incredibly positive," Trump said. "It showed her to be an honorable, incredible woman. I think she's got a level of respect that's unbelievable. I really mean it."

Former Alaska Gov. Sarah Palin suggested that she might challenge Murkowski in 2022 should she run for re-election. "Hey @LisaMurkowski — I can see 2022 from my house…" she wrote in a taunting tweet Friday.

Mr. Trump demurred when asked by the Post whether he thought Palin could defeat Murkowski in a primary challenge.

"I don't know anything about that. It's four years. That's a long time. But they will not forget. They will never forget. What she did was unacceptable. Really unacceptable," he said.

Should a conservative candidate oppose her in 2022, it would not be Murkowski's first time facing a challenge from the right. Murkowski lost her primary to a Tea Party-backed challenger in 2010. She mounted a write-in campaign and defeated all other candidates, winning re-election as an independent. 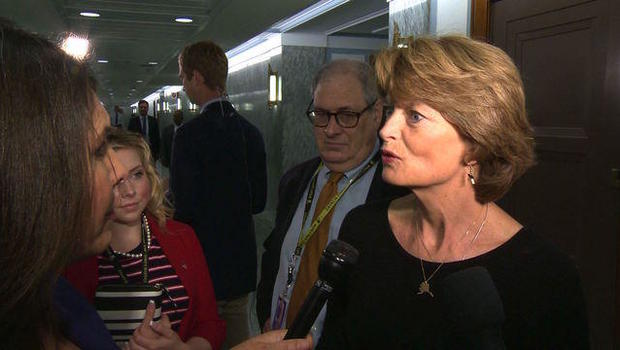 House Judiciary to hold series of hearings on Mueller report