President Trump is in Topeka, Kansas, Saturday evening for a campaign rally, hours after Judge Brett Kavanaugh was confirmed to the Supreme Court. The rally begins at 7:30 p.m. ET.

Mr. Trump is in Kansas to rally for Republican gubernatorial candidate Kris Kobach, the state's right-wing attorney general. Kobach led the administration's scuttled inquiry into voter fraud in the 2016 election.

Hundreds lined up outside ahead of the rally hours beforehand, even though it was raining.

How to watch the Trump MAGA Rally

The president watched the Senate vote on Kavanaugh while he was traveling on Air Force One to Kansas. He told reporters, "I very much appreciate those 50 votes, and I think [Kavanaugh is] going to go down as a totally brilliant Supreme Court Justice for many years, many years."

He also said of Dr. Christine Blasey Ford, the woman who accused Kavanaugh of sexual assault when they were both teenagers, that he was certain that she had misidentified Kavanaugh as the perpetrator. "I'm a hundred percent. I'm a 100%. I have no doubt," Mr. Trump said.

Kavanaugh and Ford, who accused Kavanaugh of sexually assaulting her when they were both teenagers, appeared before the Senate Judiciary Committee last week. The confirmation vote was delayed by an FBI investigation into the allegations, which concluded in under a week. Kavanaugh was confirmed by a 50-48 vote.

Kavanaugh's confirmation is even more of a triumph for the administration considering the obstacles he overcame to be confirmed. The confirmation process for Kavanaugh was complicated by allegations of sexual misconduct against him by multiple women. 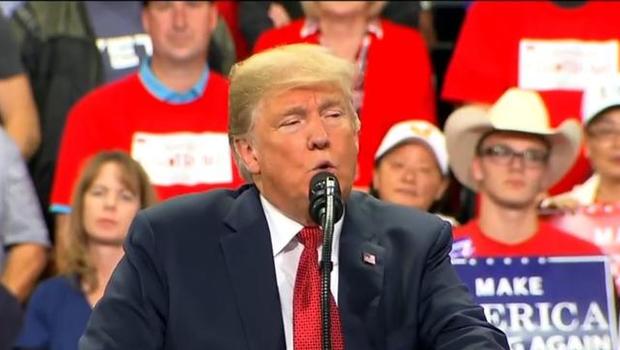 Republican Senator Mike Enzi will not seek re-election in 2020

House majority whip says Biden “ought to modify his behavior”