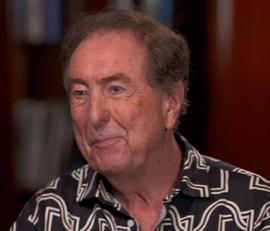 Together, they produced 45 television episodes, five films and a blockbuster Broadway musical.

"We were very serious about it. We took it very, very seriously, to be funny," Idle told "CBS This Morning: Saturday" co-host Anthony Mason.

Idle adapted the film "Monty Python and the Holy Grail" into "Spamalot," which premiered at the Shubert Theatre in 2005 and ran for almost five years. But Idle wasn't born to comedy. At age seven, he was sent away to a royal orphanage.

"My education was paid for by the RAF (Royal Air Force) 'cause my dad was killed in the RAF. And every kid in my generation who was there, none of them had any fathers," Idle said. "It was a fairly scary place. There was a dormitory 100 yards long."

He spent 12 years there. "You get less for murder," Idle joked.

He eventually made it Pembroke College in Cambridge – a far cry from the orphanage – and quickly signed up to perform in a college revue.

"The very first piece of material I did was written by John Cleese and after the show he came over and I met him. So my second term in Cambridge … and then my life changed," Idle said.

After college, he teamed up with two other future Pythons, Terry Jones and Michael Palin, in a comedy show. Their success led to the offer of a bigger show, but the studio wasn't ready yet.

"So when Cleese called up and said, 'Oh, I've got this offer for a late night Sunday show at the BBC, will you want to come and do it with me?' We said, 'Yeah, we might as well, 'cause we're waiting for our big show to happen," Idle said.

That big show never happened. Instead, in October of 1969, "Monty Python's Flying Circus" went on the air. And they had no idea what they were doing.

In Britain, it was initially received with "massive indifference" as Idle put it. But slowly, word spread and eventually made it to America in 1974. A year later, the group released "Monty Python and the Holy Grail," which became the highest grossing British film in America the next year.

Even George Harrison declared himself a fan. Harrison would also come to his rescue.

"He paid for the 'Life of Brian,' the movie. He mortgaged his house for the movie to be made because he wanted to see it," Idle said.

When financing for the 1979 film collapsed, Harrison kicked in 4 million pounds – more than $8 million at the time.

"I was flabbergasted. We were over here looking for financing and people would look at us like we're selling springtime for Hitler, you know … and it was amazing, really, that he did that," Idle said.

The film's final crucifixion scene featured a song written by Idle called "Always Look On the Bright Side of Life." That song would turn out to have a much longer life than Idle initially thought.

"About 13 years later it suddenly became a hit in England 'cause all the football fans would start singing it on the terraces when they were losing," Idle said.

It's become one of the most popular songs played at British funerals.

In 2014, the surviving cast members of Monty Python gave a farewell concert at the O2 Arena in London.

"So we got all these singers and dancers to do all Python songs. Otherwise, it's like five geriatrics, you know, sitting there doing sketches everybody knows," Idle said. "It was powerful. … It did feel like a good way to say goodbye and a good time to say goodbye."

Idle has just released his memoir, "Always Look On the Bright Side of Life." 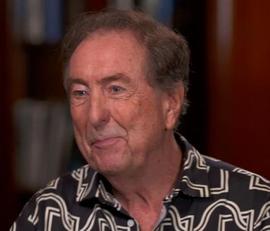